Any idea what this is?

I am cleaning out my dad’s shop. Over 95 years he had accumulated some odd tools. I am trying to figure out what this one is. I posted it in a few tool forums and know one knows but several people said it looked like a ball joint. So, I figured I’d try here. The barrel tuns and ratchets towards the “handle”, which is solid metal. It only turns 1 way. The pointed end unscrews. The other end is hollow. I tried further disassembling this thing but couldn’t loosen the nuts. The large nut on the pointed end is broken, revealing the threads underneath. I put additional images in replies.
This will end up in scrap recycling but I’d really like to know what the heck it is. 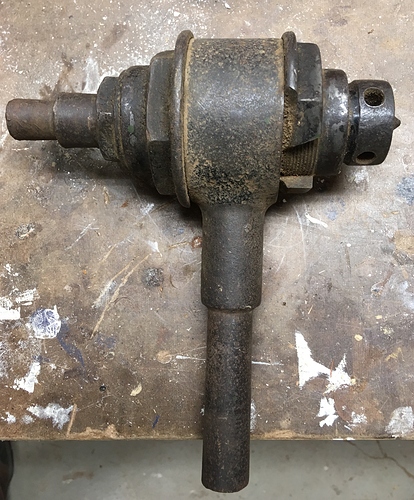 Perhaps if you soaked the end in penetrating oil overnight you could get inside it. That might help identify it.

What is the scale of this thing?

If I didn’t know better I’d think it was some sort of linkage. It actually looks sort of like a tie rod, but not quite.

The barrel tuns and ratchets towards the “handle”, which is solid metal. It only turns 1 way.

Doesn’t sound like it’s from a car, maybe some piece of machinery. Doesn’t look like a ball joint. Is that a coiled spring I see?

It actually looks sort of like a tie rod, but not quite.

That was actually my initial thought too…I know I’ve never seen one in my dad’s plethora of tools, maybe my Grandfather would know…I’ll see him Sunday and show him the picture

Is that a coiled spring I see?

I think you’re seeing the threads OP talked about: 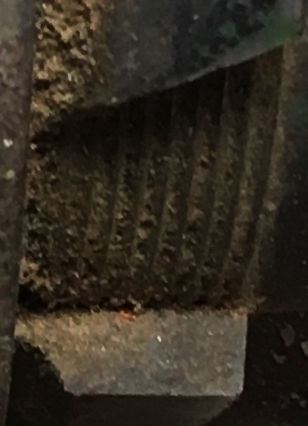 Those threads look like they’re designed to accept load primarily in one direction, longitudinally toward the point. Like “sawtooth”. The “nuts” are four sided.

I have no idea what the first point might suggest, but the square nuts suggest that this was manufactured way back before nuts were standardized, back when things were each hand made, which would make it very old. Perhaps 1800s. Maybe even earlier.

Some people like to collect old tools. Perhaps the OP’s dad was one.

Also, it appears that the threaded parts were cut from flanges of the casting… the center casting and the threaded ends are all one part. That would suggest that the cast center was a housing, perhaps for ratcheting parts.

I’m going to take a wild guess that the broken rod out the left end of the center was intended to be mounted solidly into something and that pulling the perpendicular handle down used to push the rounded collars outward and force the center point into something, with the intention of creating a stable and solid center axis. I’d be interested in seeing if the square nut on the right was at one time a part of the rounded collar. Is a photo that shows that detail possible?

That’s my theory such as it’s evolved so far.

I am a little more puzzled by something else you said. Your father collected things over 95 years and you are going to ask your GRANDFATHER about it?

The OP said his father collected for over 95 years.

I said my grandfather might know and I’d show him the picture on Sunday to see if he knew. I think you had a communications cross-up

If it ratchets, the thing may have been used in clutch linkage. I have seen a few funny clutch linkage parts. Seems like clutch pedal height could be adjusted that way.

I’m going to guess that it predates cars. The square nuts make me suspect that.

The square nuts make me suspect that.

I think square nuts were good with the ole “monkey wrench” before the “crescent wrench” was invented. I dunno though, like me, a lot of folks just take old parts that they replaced and throw them in a box just in case, or whatever. I’d say some kind of old front end component if it weren’t for the ratchet issue. Can we be sure about that? Could the ratchet just be to position it and then tighten it down so it doesn’t move? We only have a short number of years before anyone that knows anything about this stuff will not be with us anymore, so we’d better hurry.

Suspension link pin? It looks a little like some old VW hardware.

Maybe a clutch from an old piece of ground driven farm machinery ratchet’s one way for backing up & drive’s it going forward.

There’s a type of shock absorber than looks a little like that. This is from a Morris Minor. (Source: Practical Classics Magazine) 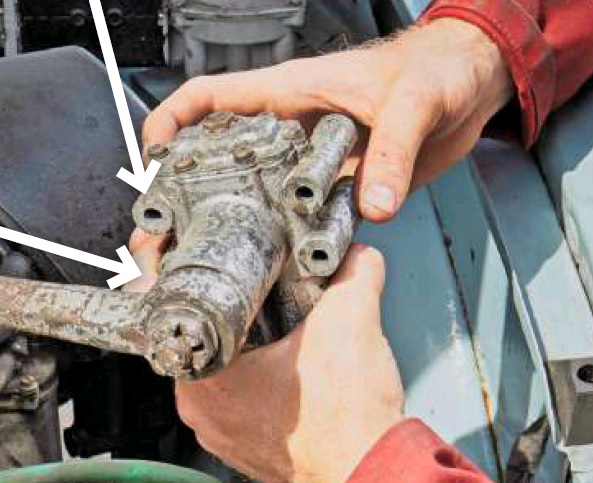 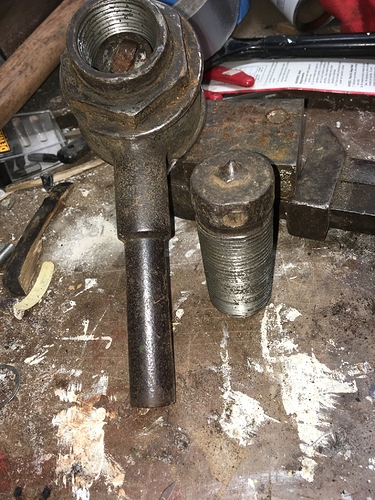 The centered point leads me to believe that the device is part of a lathe or milling machine of some kind. I think if a slow video sweeping around the shop were displayed some of you guys who have been involved with woodworking for many years could link the device to a Shopsmith type machine.

Those long threads say “jack-screw” to me. How about a pic of what came out the other end? Can you see what exactly ratchets?