All tires have white layers?

I don’t think so. I cut up several tires to make planters for my mother and they were all black…through and through. I have seen tires with a white layer but never thought much about it.

The white on sidewalls is a layer of white rubber under black rubber that is exposed by buffing off the thin black overlay as needed. With some simple equipment and a lot of patience you could put gangster whitewalls on your tires.

Hell no. I’ll just have to stay away from curbs better apparently. The mechanic said most tires all have this white layer… whether they have the white or black raised lettering. sounded like BS.

They may have had at on time, but now you rarely see whitewalls. They are still available from specialty retailers.

I do not know about all tires, but based on your experience it seems tires with raised lettering have a white underbelly on both sides. From a manufacturing standpoint it makes sense to me for an easy 1 coating of the tire (for balance) of white rubber, rather than white to one side and another step for black to the other side.

This takes us back the days when white sidewall tires were popular and the norm. If your tire has raised white lettering which you installed on the inside of the tire so it wasn’t seen; then the tire has white on the other sidewall as well. Not all tires have the white layer, but if it is a whitewall or a raised white lettered tire then it has the white layer on both sides of the tire.

I don’t believe that the manufacturers put the white on both sides of a tire in production. It would be an unnecessary, costly waste. But my experiece with tire manufacturing is somewhat prehistoric. After months of being given every dirty, hot, back breaking job in a tire plant I worked several months operating a whitewall buffer before being fired. It was quite an experience.

And the whitewall did not affect tire balance.

I thought the origins of whitewalls is that they originally only added the carbon black to the tread portion…as only it needed the wear resistance. Don’t know if true or not, but it sounded like a logical explanation.

Rubber is the color of corn flakes. It is very similar in appearence to the soles on Clark Desert Boots. There are very specific blends for each part of a tire. Tread rubber and sidewall rubber, regardless of its color are quite different as are the compounds for the inner liner, ;ply stock and beads, etc. White walls begin as two ribbons being simultaneously extruded and mated and then overlayed with a thin sheet of rubber. I can’t imagine a manufacturer using white on both sides of a tire due to the cost.

“I thought the origins of whitewalls is that they originally only added the carbon black to the tread portion…as only it needed the wear resistance.”

No, white walls were for looks. If you google photos of antique cars the tires were typically all black. There were all-white tires on antiques, I don’t know if they had white added, bet they did (titanium dioxide, I bet): 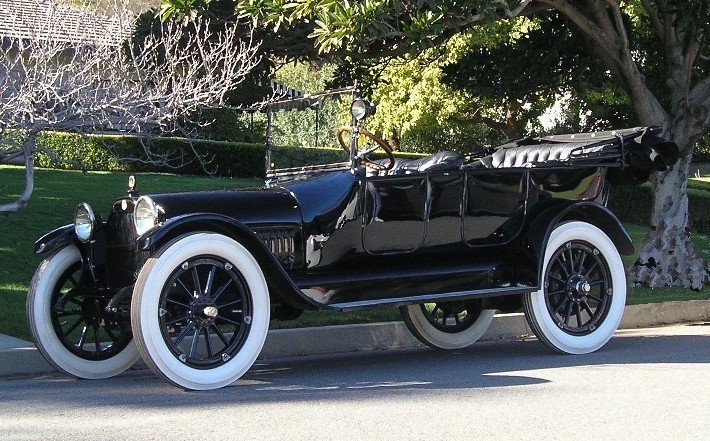 A major reason for the carbon black is protection from sunlight/UV. That’s needed in all of the tire.

Yeah, the white is embedded in the sidewall on ONE side of a tire and exposed by grinding off the black cover rubber. But that only happens on tires that have white - WSW (White Sidewall), RWL (Raised White Letters), OWL (Outline White Letters), etc. BSW (Black Sidewall) tires do NOT have unexposed white layers (except by mistake!)

Yes, carbon black is a common reinforcement because it is chemically compatible with hydrocarbons, such as rubber and it is abrasion resistant, making the tire wear longer.

Titanium dioxide is used to make the rubber white and it can be used as a reinforcement material, but it is not as effective as carbon black.

And, yes, the natural color of rubber is a translucent amber, but changes color with even a small amount of other materials.

Titanium dioxide should be very good at blocking UV, as it is in many kinds of sunblock, especially the opaque white glop skiers put on their noses. It’s also the standard white pigment used in almost all kinds of paint. It replaced lead white when it’s hazards became known. Titanium white isn’t quite as opaque as lead white, or as strong, but it’s a good pigment. And should keep your sidewalls from getting a sunburn.

There’s a carbon black plant about 10 miles from me and it’s possible that governmental regulations may have something to do with the higher price of tires nowadays.
That plant had to go through some exhaust regulations not many years ago and no doubt those changes cost millions of dollars; and that’s just one plant.

As to white inside of a tire, I can’t say that I’ve ever seen vanilla creme innards splattered from all of those shredded tire parts on the highway.

I’ve seen an uncountable number of cut up tires on commercial fishing boats and on docks. I love the ocean. Go to any commercial fishing docks and it’ll be obvious. They’re all black through & through (except for some while fibrous cords in the carcasses).

Whitewall tires were very common when I was a kid. With the exception of car shows, I never see them anymore. Having had them many years ago, as well as tires with raised white lettering, I can tell you that they’re both impossible to keep clean on a daily driver.

Very true; and they looked even worse after being raked on a curb several times.

Some may, or may not, remember back in the day that auto parts stores actually sold a crayon type stick that was white in color and it was used for touching up white sidewalls and white letters on tires.

The thing with white walls is that they looked really good when cleaned up and the hub caps polished. I remember once I bought those fake white wall inserts if you remember those. They fit between the wheel rim and the tire. Of course tubes then so didn’t need to worry about the bead sealing.

Yes @Bing. I recall those add on whitewalls too. I beileve they were called “Porter-Walls.”

LOL, yeah, I remember all those things. Man, how quickly the years pass!