In today’s show (11/5/11), a lady was in a filling station and turned the engine off (per local code) but turned the ignition switch to the accessory position to keep powering the radio to listen to NPR. Her husband said that she couldn’t do it because it was the same thing as using a cell phone. THEN the Car Talk response was that is was ok to do it, and the reasoning: cell phones send out radio waves that would cause an incident, and the car radio only receives them.

Sorry guys: wrong reasoning.
In the engineering of hydrocarbon rich environments (refineries, pipelines, etc), and co-incidentally how combustion engines work, the ignition triangle still applies. ie: Fuel, oxygen and ignition source.
Certainly there is oxygen in the air surrounding the gasoline pump. Rarely (but enough to be real) is the presence of vaporized gasoline. Also rarely is the occurance of a spark. There have been many incidents relating to static electricity sparks from gas cans causing explosions. There are also incidents happen from the extremely hot surfaces of catalytic converters.

Agreed that there is a world wide discussion about the capability of cell phones to cause a spark with enough energy to cause an incident. Some say no, and some point to one or two rare incidents that are not clearly defined. So, as the companies requrie (due to lawyers actions) will say: be safe and turn it off. Thus: don’t use the cell phone, don’t keep the engine running.

Is it likley that the gasoline will vaporize, then waft into the car at the same time the car radio might be running and someone changes the channel by pushing a switch and cause an arc? Probably not, and that is also part of the engineering work: the calculation of probability and the assignment of a classified (hazardous) area. See the National Electric Code, Article 500. There’s also another one relating to filling station design, but I don’t remember it.

Cell phones aren’t the problem, getting back into the car to use them is. The same holds true for listening to the radio-I bet she got back into the car and when she gets out she can develop a static charge that can ignite the fumes near the filler

Yeah, I mean with all the gas stations bursting into flames everyday, you just can’t be too careful…

Mythbusters busted the myth of cell phones starting fires at gas stations, and the idea of radio waves being the issue is boooooooogus.

The most common cause of fires started while dispensing gasoline is static discharge. If you are wearing a wool coat, it’s a good idea to touch a grounded piece of metal before you start pumping. What happens most often is someone starts the pump pumping gas and gets inside the car for something. Getting in the car causes a positive charge, and when the person touches the gas pump handle/nozzle assembly, the discharge ignites the gasoline fumes.

The lady should listen to her husband. Turning the key switch to “accessory” energizes more circuits than the radio. Static electricity is the worst offender when it comes to starting fires but an energized circuit could do the same thing.

Gas station fires are simply not a problem…

@Caddyman, tell that to these people. Cell phones aren’t the culprit, but gas station fires can be catastrophic.

Is static electricity a suspected cause of a reported increase in gas station refueling fires? 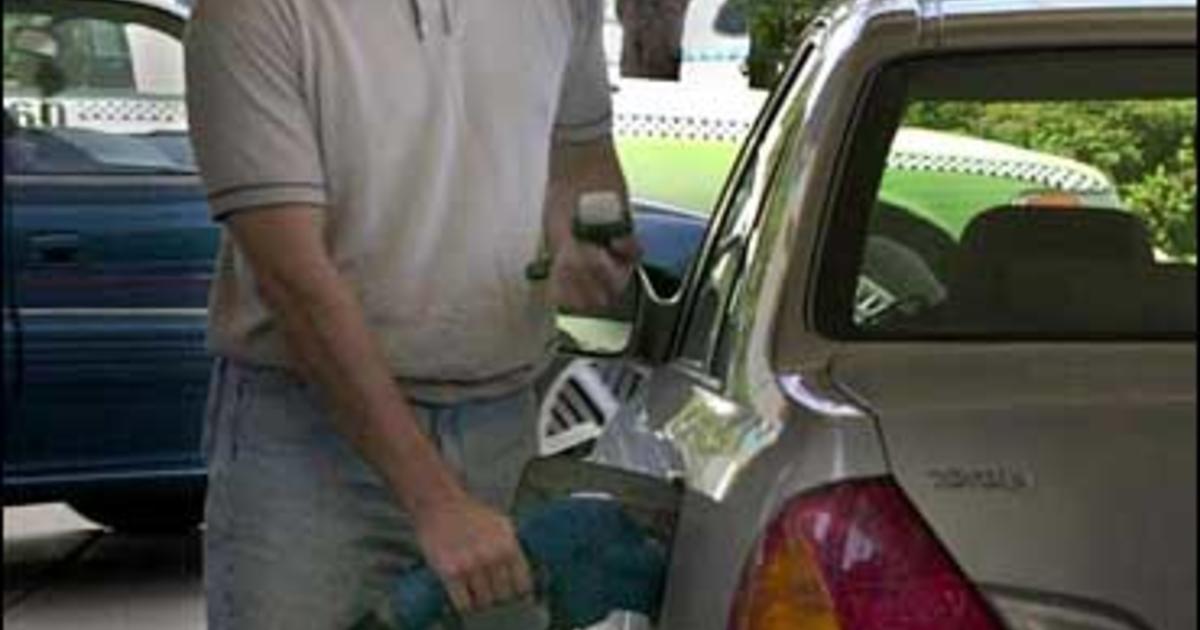 What You Can Do To Stay Safe

L. David Byers, 19 of Cumberland County, Pennsylvania, died after inhaling super heated gases caused by a gas fire started by a static electricity charge at a gas pump. While Byers' death is an ...

And what did she do? She got back in the car, then got out again, with a big static charge. No cell phone, no key in ‘aux’ position.

Yep, that was definitely the cause, not a cell phone.

Cell Phone Use at Gas Pump

Does the use of cellular phones pose a danger of touching off explosions at gas stations?

Even if a cell phone is not being used, it handshakes with the tower every couple minutes. So the supposed “danger” is still there all the time, 24/7 without anyone thinking about it. EM radiation comes from everywhere, all the time, in various frequencies and amplitudes. Maybe we should worry about sunspots exploding gas stations (just kidding!). I’d say don’t use a cell phone while gassing up because you are holding a giant squirt gun of gas and should probably pay attention to what you are doing.

Sorry if this is a double post, I couldn’t see my first post so I’m trying again.

IT’S A MYTH! No cell phone has ever been confirmed to start a fire at a gas station. Take a look at this link.

Cell Phone Use at Gas Pump

Does the use of cellular phones pose a danger of touching off explosions at gas stations?

While cell phones have sometimes been blamed initially after a fire, thorough investigations ruled them out afterwards.

Hey Whitey, was that for me? If so, I was agreeing with you. If not, then sorry for being overdefensive.

I was saying that worrying about cell phones starting gas station fires makes about as much sense as worrying about sunspots doing the same. I meant to suggest: many of the goofballs who think cell phones do all these ridiculous things don’t even understand how they work and don’t realize that the alleged “problem EM emissions” still exist when they aren’t talking on the phone. AND they often have little to no knowledge about the EM spectrum in general, in my observation.

To those afraid their cellphone/radio will kill them: Imagine yourself gassing up the car right now. You’re surrounded by other cars, some engines running (just blocking the pumps so they can get a candy bar), some engines turning off, some turning on. Maybe most or all drivers have cell phones on, some are talking on their phones. Maybe you have a phone clipped to your belt, right next to the gas nozzle! The gas station attendant is definitely on his/her cellphone and watching TV. There are lights above your head, buzzing and flickering. There’s the whole spectrum from the sun, EM radiation from friggin’ space in general. Street lights cycling on and off. Humans emitting infrared. Radio waves zooming around. Phone/power lines nearby. Everything everywhere is awash in EM interference all the time. Its going through you, reflecting off you and diffracting around you, yet you seem to be getting along just fine.

Ah! I misunderstood. There’s a lot of that going around today.

Do police cars turn off their radio at gas stations? No? Didn’t think so.

Do police officers turn off their cell phones at gas stations? No? Didn’t think so.

Do gas stations turn off their gas pumps? No? Didn’t think so.

Tonight I was filling my van with fuel, with my cell phone mounted to the dash, when my wife called. I thot, My God, I could have exploded!!

The original objection to a cellphone at the pump was that somehow sending or receiving a call could ignite the fuel. That came from a vague memory of driving through an area where they were blasting; signs would be posted “turn off all radios” because a stray signal in the frequency range of the remote triggers might set off the explosion before everyone was clear of the area. They didn’t bother to specify “two-way” radios (the only real risk) because it made the signs shorter and people could absorb the message more quickly.

Then when folks realized that (A) gas pumps aren’t fitted out with radio-controlled blasting caps and (B) cellphone signals are lower-intensity, encoded, and in a whole different frequency range, the concern shifted to the spark from initiating an electrical connection. Never mind that the car is full of spark-causing electrical circuits and you can’t even drive away from the pump without setting off dozens of them, and yet you never heard of a gas pump exploding because someone put on his turn signal before leaving the station. The phone was the new thing, so it had to be the big risk!

I have heard people claim that a friend of a friend (that’s always a giveaway, isn’t it?) once saw a guy answer his cellphone while pumping gas and the pump suddenly turned into a fireball. Invariably it develops that they neglected to mention that the guy at ground zero had to switch the nozzle to the other hand in order to take out the phone with the hand that wasn’t holding the lit cigarette at the time.

There’s an error in the original post. Radio waves do not cause combustion. The addition of a heat source to fuel in an oxygen rich environment causes combustion.

While radiaton waves of sufficient strength can cause the generation of heat via molecular activity, no cell phone in the world is capable of generating that much heat. A spark, on the other hand, is an arc containing sufficient heat to ignite a highly volatile environment under the right conditions.

The third element of Jtigger’s triad, the “ignition source” should IMHO be changed to “heat source” to better understand the problem. The question them becomes “can the xxxx generate sufficient heat to initiate combustion if the other two elements are present”.

The trouble with Jtigger’s reasoning is that by his logic, you can’t start your car once you’re done getting gas. The gas vapors don’t magically vanish from your car just because you’ve hung up the pump. And others are still filling their cars. There’s a LOT of sparking going on when you start a car. It’s a wonder we don’t have daily explosions.

Until they determine that we need to push our cars 100 yards from the gas station before starting them, I’m not going to believe that turning the key to ACC has any more possibility of sparking a fire than starting the car does.

Listening to this podcast got me to wondering about the whole “I turned off the car, in accordance with state law while pumping gas” statement the lady made.

I live in Washington state as well as the caller, and in my 27 years of driving in this and a number of other states, I have never heard of any such law. Searching the Revised Code of Washington for any such law came up with nothing.

Does anyone know of an actual law that says you have to turn your cars engine off while pumping gas? If it’s very cold, I’ll leave our van running while my wife and kids are inside keeping warm while I pump gas.

I don’t want to find out the expensive way that this is illegal.

This would be controlled by state statutes, and may vary statutorilly. And it may be under fire prevention regulation for the gas stations to require it rather than the driver to do it. State statutes and fire regulations are generally developed using federal agency regulations as a basis, but that does not make them federal laws.