A blast from the past

Santa Claus was very good to me this year, because I got one of the gifts that I REALLY wanted, namely the newly re-mastered DVD set of the complete run of Naked City TV programs from the late '50s-early '60s. This encompasses 139 episodes (some with the original commercials), and it is truly fascinating, IMHO.

For those who are too young to recall this program, it was the first (and perhaps the only) TV cop program that was filmed entirely on location on the streets of NYC. As a result, it is a true time capsule of that city from 50+ years ago. For anyone (like me) who grew up in and around NYC in that era, it is literally a blast from the past.

But, the bonus for car-oriented people like me is that you see the cars of the era as they were really used.
All of the ambulances–and hearses–are either Cadillacs or Packards.
The streets are filled with Studebakers, Hudsons, and every variety of domestic & imported car from that era that you can possibly imagine.
The “marked” NYC police cars are '54 Fords, which–I think–is accurate.

What is absolutely not accurate is the use of Pontiacs by the detectives around whom the series revolves.
Beginning with '58 Chieftain sedans (very similar, but somewhat better-looking than '58 Chevies), and then progressing through '59, '60, & '61 Catalinas, you see these HUGE softly-suspended behemoths being wrestled around curves.

Even the slightest touch of the accelerator or the brake causes these oversized whales to pitch & roll like a dinghy in stormy sea. So, even though–to the best of my knowledge–the NYPD never used full-sized Pontiacs for their detectives, the series does illustrate very clearly how far we have come with handling, braking, anti-dive and anti-squat technology on modern cars.

Anyway…if you are a fan of TV cop programs from 50+ years ago, and if you hanker to see cars of that era, this DVD set is a veritable bonanza.

No, I am not advertising this DVD set, but I am recommending it for certain people of a certain age…

Edited in order to add:
Another interesting factor of life in the late '50s-early '60s is the vastly different attitude toward smoking that is on view in this series.
In addition to the fact that people are constantly smoking everywhere–including stores, offices, and hospitals–the most amazing sight is how they react when a cop is shot.
Do they immediately call for an ambulance?
Nope!
Do they check the nature of the wounds?
Again, no.
Do they administer CPR?
Absolutely not!

When somebody is shot, you light a cigarette and give it to him to smoke!

China beach was the only series I recorded, but glad for your happiness, as a retro dark comedy enjoying a variety of actors and actresses you might try catch 22

I love old shows like that which were filmed in real locations and can give us a glimpse into the past. Thank you for sharing, I will check it out. Even though I am unfamiliar with New York City, it still will be interesting to see the streetscapes back then.

I just got to thinking, its actually terrifying that 1964 was 50 years ago… I always associated “50 Years ago” With WW2, time is slipping by me.

I wasn’t around in 1964, however it seems as if we just celebrated the 25th anniversary of the Mustang, I still have a anniversary pin that sales people at the Ford dealers got. Time goes way too fast.

Remember when the Beetles first came to America and played the Ed Sullivan show … 50 years ago?
I do. Damn, time flies.

Remembering videos of screaming teens at the beatles and other concerts, things have not changed much.

I love to watch classic movies, especially those WW2 movies which were actually filmed during the war . . . plenty of propaganda

Anyways, I seem to recall that in many of those movies, when one of the soldiers, seamen, marines, etc. is all shot up and lying on the stretcher, one of his buddies always lights up a smoke and gives it to him, then sticks the rest of the pack in the shot up guy’s pocket, because he’ll need them later

Yeah, I’m a car guy and I like to watch old TV shows for the cars sometimes. Perry Mason always had a new Lincoln, the Ward Cleaver had one of those ugly Dodge Darts for a while, and Jim Rockford got a new Firebird every season it seemed. And they all smoked. Even Santa Claus smoked way back when.

When my parents finally bought a television set in the fall of 1954, I was in junior high school. I remember watching “The Line Up” where the car Lt. Guthrie and Inspector Grebb used was a 1951 Ford Deluxe until 1957 when they got a new car–a 1957 Dodge. The show always opened with the two detectives coming up a hill in their car. We watched the original Dragnet with Sgt. Joe Friday and his partner, Officer Frank Smith. The car these detectives used was first a 1953 Ford Mainline, then a 1954 Ford Customline, and finally a 1956 Ford Customline. Dragnet was disappeared for about 10 years, and then returned with Joe Friday’s partner Bill Gannon. The car used was an intermediate Ford Fairlane–I think about a 1967. There was Highway Patrol with Dan Matthews in his 1955 Buick 2 door Century which had a manual transmission. Another show was “I Led Three Lives” based on the story of Herbert A. Philbrick who was a citizen, Communist, and counterspy for the FBI. In typical FBI fashion, Philbrick drove the bottom line cars of the early to mid 1950s–the Chevrolet 150, the Plymouth Plaza or the Ford Mainline.
Wilbur, on “Mr. Ed” took Ed places in a horse trailer pulled with a Studebaker Lark.

Yeah me too. I like the old shows for the cars in real life use. Wasn’t that long ago when you could sit in a plane, have a free drink and a smoke and no one said anything. Then you had to sit in the back. Now if you are lucky you can go inside a tube at one of several airports like Amsterdam.

I have the entire Twilight Zone collection (my kids bought it for me a few Christmases ago) as well as a number of classic SciFi movies made in the '50s and '60s… … including “The Day The Earth Stood Still”, the “gold standard” in classic SciFi films.

I also have the Roman-era classics. I watched Ben Hur just last week. They don’t make movies that great anymore. If young people want to see what a truly great movie looks like, I recommend Ben Hur. Or Sparticus.

I honestly can’t remember the Naked City series although I’m a sucker for the old Twilight Zone shows.
Back in the early 70s I went to CA for a while; driving a '59 Corvette and doing the hit and miss thing on Route 66 and I-40 which was not finished at the time. Over the years I had several people ask if I was trying to mimic that old TV show “Route 66”. No; didn’t care about the show and never even thought of it. Route 66 was simply a means to an end although it’s glorified now.
Back then it was a road to get from A to B.

I’m also a sucker for Laurel and Hardy. Check out Youtube for “Two Tars”. That involves a lot of cars and what I always jokingly call “a day at the service department”.

I didn’t even know they still existed, until I saw that guy that light up

speaking of those twilight zone episodes with Rod Serling, did they ever actually show him smoking?

Or did they just show the smoke, because the cigarette was out of sight?

Great question Db. I watch the show every evening at 11:00pm on MeTV. I’ll keep an eye out and let you know.

I remember our first tv, black and white of course, I was not allowed to watch Peyton Place. That was around the time my dad’s new impala 1960 or so with the fins got hit and runned while parked. I did not understand at the time why he was so upset. And @db4960 I do remember Rod smoking, I think even Dick Van Dyke. 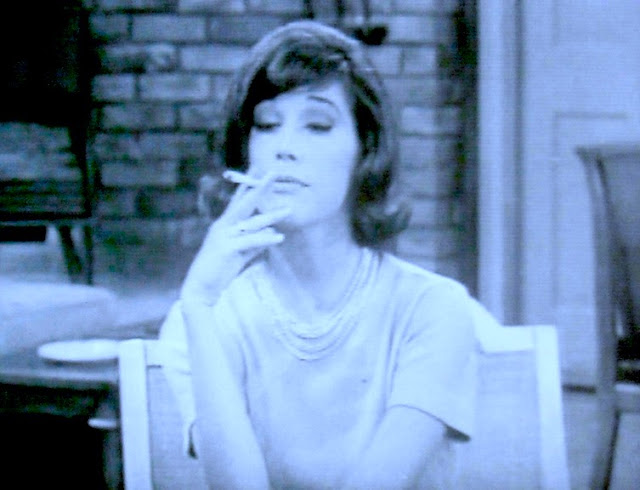 @db4690, Pall Mall makes several different styles of cigs now, but the classic red Pall Mall non-filter is getting hard to find. If they ever quit making those I’ll have to quit. Filter cigarettes make me cough and Camel straights taste like crap.

Everybody and I mean everybody smoked on TV in the 50s and 60s, even later. Used to see Johnny Carson smoking on the Tonight show. You can even see Lucy light up on an old I Love Lucy. And somewhere on YouTube you can watch Fred and Barney kicking back enjoying a Winston.

Everybody smoked EVERYWHERE!!
I worked in my dad’s retail store in the '60s, and I remember sweeping up piles of cigarette butts every evening before closing. Nobody thought anything of it. It was just normal. Some people even used to smoke while pumping gas … and that was before EVAP systems! It’s a wonder more people didn’t blow themselves up.

Yep even Andy Griffith but he’d step out on the porch after dinner and light up what looked like a Camel.

I like watching the 70s series “Emergency”, which is on Netflix. I love seeing the 70s cars, clothing, hairstyles, technology, and attitudes. (plus it’s a cool old series) I used to watch it as a little kid. It was a pleasant surprise to find these old episodes on Netflix. And since they were filmed on actual film, they are higher quality than later series that were videotaped.