My teenage daughter was driving. She was on the highway and the engine just lost power. Turns over but won’t restart. Seems like it’s out of gas, but it has more than half a tank. (She also reports that about 20 miles before the car stopped running, she heard a noise like she ran over something, but she didn’t see what she might have run over.)

I’ve been playing with the car since it was towed home. It’s behaving very much as if it is out of gas. Car turns over like normal but doesn’t start.

Hooked up a fuel pressure gauge and it reads zero while the engine is turning over.

I replaced the fuel filter and the fuel pump (lots of fuel in the tank!). Still no pressure and no starting. I (am pretty sure I) can hear the fuel pump whirring when I try to start the car.

OBDII gave an error code about the camshaft position sensor, so I replaced that. The error is gone, but still no fuel pressure reading and car still turns over without starting. No other OBD error codes.

I think that’s everything I’ve got to tell you. Any advice would be greatly appreciated!

Have you tried starting fluid to see if it’s a fuel problem ? 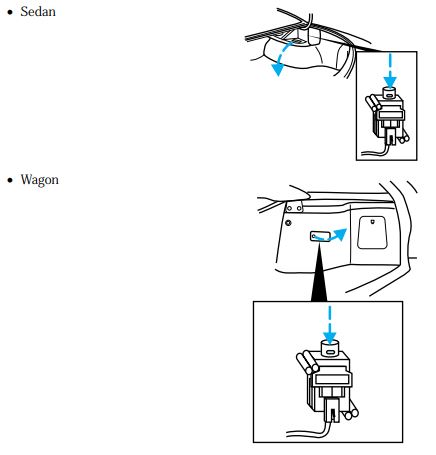 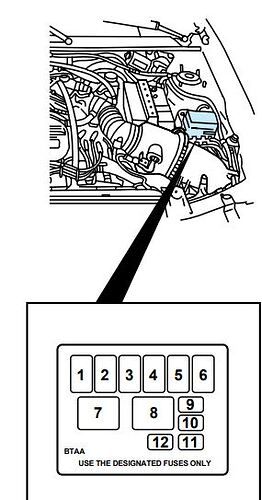 Along with the helpful post from @It_s-Me, if you think the line is plugged, disconnect it at the filter and then the engine and hit the line with air pressure as a check. Also chase the line to see if the it got crushed by whatever your daughter heard.

Is there anyway to check if the timing belt broke?

Check both wires at the inertia switch. One should be black; the other pink/black. Both should show power for a couple of seconds when the key is first turned on. Then it will disappear. If you continue cranking power should remain present.
No power at the pink/black means there is a fuse blown, problem with the CCRM (fancy name for a box of relays), or the internal ground inside the PCM for the fuel pump trigger circuit has failed. This should not be hard to sort out.

Might try loosening and retightening the CCRM connector. Tiny pins and high current over time can cause erratic operation of the fuel pump. PCM, and cooling fans. Sometimes with the key on you can wiggle that connector and hear relays kicking in and out due to poor connections.

The crankshaft position sensor may have failed.

Wow! This is an awesome forum. Thanks for all the great replies. After coffee I’ll get back too it and let you all know what I find out.

If you connected the fuel pressure gauge properly and there is no fuel pressure, then that is the problem. Someone should look at the gauge while cranking. Does this vehicle have a fuel return line? Maybe the fuel pressure regulator is bad and all the fuel is being sent back to the tank.

Since posting yesterday I have reconsidered my assumption that the fuel pump is working. A friend asked me if I could hear it and I thought I could. Now I’m not so sure. I’ve still got the back seat out and the cover off so I understand that I should be able to feel it working if it is.

This sounds idiotic but I’m not sure where to shoot the starting fluid. The air filter intake seems to be . . . the driver’s side of the engine compartment?

Seems unlikely that the fuel line was squeezed shut, as the car must have used a gallon of gas after maybe running over something, but it’s possible. Jacking it up and doing a visual inspection is a few steps down my to-do list. Need to change the oil anyway.

Really hoping it’s not the crank sensor as the cam sensor was no fun at all, but maybe it’s more accessible.

The inertia switch was not tripped.

I’ll get back to you all after I’ve done some more work based on your suggestions.

The only thing I’ll add is to check for power to the pump at either the test/prime connector or at the pump if you have the seat out. Is there a relay involved also?

I guess I’d spend some time underneath to try and see if I could identify what was hit. Might be an unrelated red herring though or not. I did have a couple crank sensors go though and everything was dead. I suppose the noise though could have cracked or damaged it.

Note there are 3 fuses involved. Any of those 3 that might be popped could cause an inoperative fuel pump circuit so fuse check first.

In the event a fuse is popped it should be kept in mind that a dying fuel pump could have caused it. As a pump wears the current draw goes up and coupled with the surge current when the pump is first activated could easily lead to a blown fuse.
Same principle applies to cabin blower motors, radiator cooling fans, worn starter motors, etc.

I’m not a mechanic but I think a compression test would test for a timing issue, but if the belt/chain were bad, you should hear a different starter sound. I also was able to peer through a valve cover opening to see if the valves are moving when cranking. Might be time for a shop.

sorry, I could not post this picture but if you click the link, you will see it. did your fuel pump have a hose on it like the picture? if so, it could have got disconnected and would just pump the gas back in your tank and you would not have any fuel pressure. the better fuel pumps have a metal tube instead of a hose.

Not done yet: crank sensor (no error from OBD2)

It’s apparent you didn’t read the article, or didn’t grasp what you read.

A diagnostic scan tool will show a code between P0335 and P0338. The check engine light doesn’t always come on, though, so you could be experiencing any of the above symptoms for some time before you see the warning light.

Fuel pump is definitely pumping fuel. I took the hoses off and visually confirmed.

Tester: Guilty as charged. I just did the visual inspection underneath the car and didn’t find anything suspicious. Starting to figure out the where and how of the crank sensor next.

So pump is working but nothing at the fuel rail? Filter on backwards?

Bing: I don’t how that would be possible; nothing would fit right. Also that would mean that the old filter was the original problem and my very incorrect install of the new filter is the new problem. Seems unlikely, no?