Bought the car in September 2021. In March 2022 car stopped on a major hwy and would not start for ten minutes after walking away from the car. Same thing happen in April 2022 and June 2022. No one in the dealership knew what to do… We are seniors and are afraid that the car is unsafe. Waldorf, Maryland Sheeny is the dealership where we purchased the car from and they wanted us to trade it in and pay an additional $4K to get another one.

Check the lemon laws in your state.
Hopefully you have kept the documentation from the service department acknowledging the problem and their inability to correct it.
Would suggest you take it to a different dealership for diagnosis/repair.
Elevate your complaint up the corporate chain as described in your owners manual.

If you can replicate the conditions of no start try working with the dealer so they can be on alert. Had my wife stop by the dealer every time she was near, then no start, and of course no codes,and after 30 minutes would start. 2 tows to the dealer and started right up. They hopped on it and found it to be a failing fuel pump (different make) fixed under warranty.

Check the lemon laws in your state.

+1
If I had the misfortune to own the OP’s car, I would have filed a Lemon Law complaint after the second incident, with zero help from the dealership’s service department.

Is the OP not aware of the existence of Lemon Laws? Once a complaint is filed, one is dealing exclusively with the manufacturer, not the dealership.

Most Lemon Laws make one eligible for a settlement after 3 failed repair attempts, so it appears that the OP is already in that territory. I hope that the Lemon Law in Maryland gives the aggrieved car owner the option of choosing an identical replacement vehicle or a full cash refund because… somehow… I don’t think that the OP wants another Hyundai.

Anyway… the OP needs to immediately research the Lemon Law in his/her state, assemble all of the needed documentation, and file the complaint a.s.a.p. I can tell you from experience that you do NOT need an attorney, as any reasonably literate person can complete the legal forms on their own.

Yes check lemon laws and proceed exactly as required. They have only so many attempts for the same problem but don’t delay.

This sort of problem can be very difficult to diagnose unless you can get it to consistently occur when the car is at the shop. Could be from among fuel, exhaust, cooling, electrical, switches, sensors, actuators, security system, etc. Very true that it is a frustratng and potentially dangerous situation. I’ve had a similar symptonm occur twice over the years, first time was my 70’s Rabbit, faulty fuel pump relay and relay plate; second time was oxidation build up on the distributor points, 70’s truck.

Edit: Recalled another time w/the Rabbit, engine would stall out whenever running over puddle. Crack in ignition coil.

If you can get a new, equivalent replacement for another $4k, that’s what I’d probably do. An alternative, they let you use one of their cars, and ask one of their staff to drive yours on a daily basis. Eventually it will fail and the staff tech will probably be able to figure it out then.

If you can get a new, equivalent replacement for another $4k, that’s what I’d probably do.

… and if the OP is successful with a Lemon Law claim, they can get an equivalent replacement Hyundai for ZERO dollars. Additionally, as I previously suggested, if their state’s Lemon Law gives the option of a full cash refund (as NJ does), that gives them the option of buying a different make and model–in which they would likely have more confidence.

if the OP is successful with a Lemon Law … ZERO dollars.

Not disputing, but the zero dollar figure comes with a lot of time spent dealing with the manufacturer and dealership. Senior citizen couple may not want to invest the time to save $4k. Esp in Covid era.

the zero dollar figure comes with a lot of time spent dealing with the manufacturer and dealership.

Based on my experience–albeit with Toyota, rather than Hyundai–the process was very quick. I got their corporate representative to rapidly agree–in writing–that if their next repair attempt was unsuccessful, my friend would promptly receive a check for the full purchase price of his Rav, including the fees for sales tax, plates, and registration.

To their credit, they sent the regional service supervisor and a Japanese engineer to the dealership to work on my friend’s Rav. It took them about 2 hours to figure out the fairly simple programming correction that had eluded the dealership’s mechanics on two prior occasions. If they had not been successful, they would have had to disburse a hefty refund, so it was in their best interests to send in the Big Guns at that point.

Edited to add:
I asked my friend to check his records regarding the timeline that was involved with his Lemon Law complaint, from the time that I submitted my Demand Letter/Legal Forms/copies of failed repair invoices, to the successful conclusion of the situation. He tells me that it took approximately 6 weeks.

If they hadn’t been able to–finally–repair his car on the third attempt, the manufacturer would have been on the hook for that full refund. (Note: The dealership had nothing to do with this process, other than providing space for the Regional Service Supervisor and an engineer to do their repair work.)

They gotta give ya a loaner too while they scratch their heads.

Is it a hybrid? Saw a guy selling his new Highlander hybrid for $9k over purchase price.

I live in Maryland and had a continuing problem in a new car I bought a number of years ago, and the lemon law made them fix it finally. The law is linked below from the Maryland DMV. 4 tries and a new car still in warranty. See full requirements below. Get receipts for every visit. If you have 4 already, send Hyundai a letter explaining the problem and tthat you are invoking the lemon law. If they can’t fix it in 30 days, you get a new Tucson just like the one you own now at their expense. 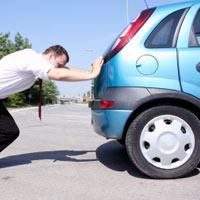 Find out Maryland's lemon law definition and what consumer protections you have.

That website is not an official State of Maryland site, and it appears to exist for the purpose of drumming up business for lawyers, who–based on my experience–are not necessary for Lemon Law claims.

Here is the appropriate part of the Maryland AG’s site, explaining the law and including the necessary legal forms:

Thanks. I didn’t notice the org extender instead of the gov extender.