I own a 2012 KIA Sorento that I have to manually change the gears because it will bog down sometimes. It drinks oil and gas now like crazy! It seemed to do better for about a day when I replaced the gas cap but then right back to this nonsense. It doesn’t appear to be burning the oil and i know it’s not leaking under the car. The check engine codes say fuel pump but previous owner had an inline fuel pump installed so I have no idea where the fuel filter is now. Any advice would be greatly appreciated.

Most likely you are burning oil. The catalytic converters clean it up so you don’t see the blue smile like the pre-cat cars. The oil will probably kill your cat before long.
A compression test is in order.
Questions:
CEL on?
How many miles per quart of oil?
How many miles on the engine?
What is your MPG of gas?

The inline fuel pump is a Mickey Mouse solution to prevent removing the tank and replacing the pump inside. Who knows what kind of pressure and flow it has.

Had a 2012 Kia Optima 2.4L, seemed to get way worse gas mileage than stated (even with economic driving) and had a bad habit of fuel leaking passed the piston rings into the oil and also burned about a quart every 5000 miles on a good engine (i blame direct injection. Also creates bad carbon build up on valves making worse gas mileage/running car) do you know what engine it is? Either 2.4 or 2.0 I’m sure have same issues, Kia and Hyundai really weren’t thinking well in 2010-2015, then again i don’t think they were even before that.

Yes on the CEL. It has 125k miles and gets 325 miles per tank. I’m up to using a quart of oil every other week. I think I’ve figured out what the problem is. Long story short I haven’t stayed on top of my car as I usually do. My son recently passed away and I just can’t get my life together now. But anyway, today I stopped for the oil and naturally went for the synthetic oil. Then it hit me, my bf has been putting regular oil in it. I googled mixing the two and went ahead and poured it in. It seemed to struggle for about the first 20 miles but now it runs like it’s supposed to. Could that have been the problem all along?

@Emurry8448 I love my KIAs. I was KIA before KIA was cool. My 2006.5 Optima even won a trip to Seoul Korea for me and my friend in 2016. I was one of 6 winners from the US that won. They had winners from all around the world. We enjoyed 5 days and 4 nights of being treated like royalty. The CEO and VPs were there with us at supper and continued to thank us for being loyal customers. It was amazing! We toured the KIA plant and the Hyundai Steel Company. They have fish tanks and live plants throughout the plant. And the steel mill has miles of covered conveyor lines that prevents any dust from entering the atmosphere.
My Optima had over 225k miles on it when I gave it to my youngest son. It still drove and handled just like it did the day I bought it. He blew the motor in it by running it without any oil. I didn’t speak to him for over a month and he still lived with me! Lol

You need to have the codes read, most auto parts stores will do this for free. Then post the codes here, format is P0123. Then we might be able to provide some ideas.
Gas usage is measured in miles per gallon:

Get the miles traveled from the trip odometer, or subtract the original odometer reading from the new one.

Divide the miles traveled by the amount of gallons it took to refill the tank. The result will be your car’s average Miles Per Gallon yield for that driving period.

Oil usage is measured In similarly, but check level at least weekly and note how many miles it goes before requiring adding oil. Some folks will add when down 1/2 quart. So 1/2 at every 1000 miles= 1 qt per 2000 miles.
I don’t know what Kia specifies but often auto manufacturers will say as much as one quart per 600 miles is acceptable.
The 2.4 engines had known problems, but as the second owner you are probably not covered, especially since the engine was modified with the second fuel pump.
These issues may be why the previous owner sold the car.
Unless the manufacturer requires synthetic oil, convential oil makes little difference as long as changed on time.

Yes on the CEL

What are the codes?

How big is the fuel tank?

I’m up to using a quart of oil every other week.

How many miles a week do you drive?

my bf has been putting regular oil in

Shouldn’t make a difference when it comes to oil consumption, your car doesn’t require synthetic anyway, so regular dino oil is acceptable.

Could that have been the problem all along?

today I stopped for the oil and naturally went for the synthetic oil. Then it hit me, my bf has been putting regular oil in it. I googled mixing the two and went ahead and poured it in. It seemed to struggle for about the first 20 miles but now it runs like it’s supposed to. Could that have been the problem all along?

Regular and synthetic can be mixed with no worries.
In fact, what’s sold as regular oil contains some synthetic in order to meet today’s high standards.

Thanks for all the help. I had my oil changed and went with full synthetic. It ran great for 2 days. Now I’m back to manually changing gears until it gets warmed up. Craziest thing I’ve ever seen.
My boyfriend passed away Saturday afternoon due to a second heart attack. He was only 39 years old. Always make sure your loved ones know how much you love them and enjoy each other. You just never know if tomorrow will ever come.

There are special oil for high milage vehicles.
High mileage oils contain seal conditioners and additives that cause o-rings, gaskets and seals to swell. … Many high mileage motor oils include detergents and claim they are are designed to remove sludge from engines. Most high mileage oils are formulated to benefit vehicles with 75,000 miles or more. 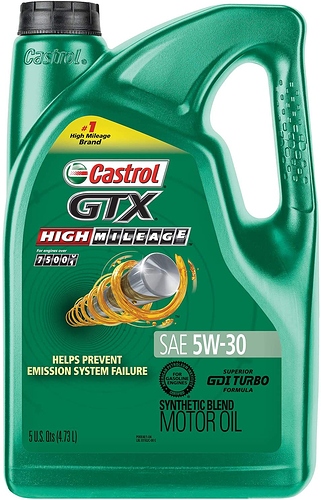