Is the ON - DOOR - OFF switch in the proper position? 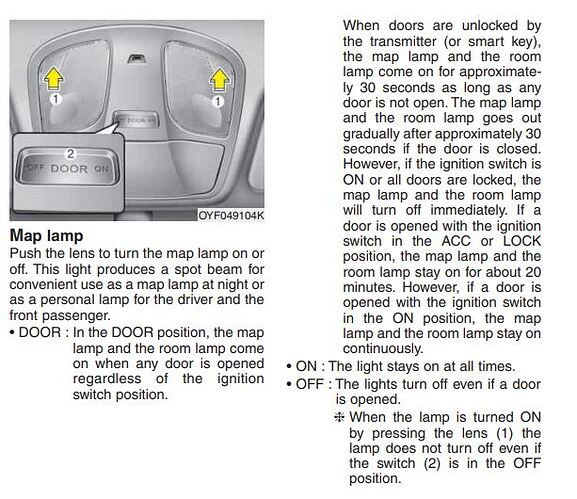 I have to say, that’s some pretty complicated arrangement for something as simple as lighting the passenger compartment when the door is opened . Looks like IRS instructions! …lol …

That is not complcated , many vehicles map lights work the same way .

New fangled gadgetry can be confusing. I can see why a driver might want the light to come on w/door closed, but I wonder why a driver would ever want the interior light to be off when door is open? If you want it off, just close the door. Maybe to prevent battery from discharging when working on car I guess.

New fangled gadgetry can be confusing

New fangled gadgetry can be confusing.

Near fangled? Almost 50 years ago my 1975 Corolla interior light had that off/door/on type switch, your Corolla probably does too. I guess old tech gadgets are still confusing.

1975 Corolla interior light had that off/door/on type switch, your Corolla probably does too.

My Corolla has a manual operated switch, but not nearly the functionality described in post 3 above

Can’t speak to the 1995 Corolla, but beyond this sort of cursory description

the 1992 Corolla’s indoor lighting function is very different. If the instructions had said what It’s Me suggested they said, I would agreee it’s simple. But they don’t, and they are definitely not simple