I have a 2012 Equinox (80k miles) and the muffler is leaking (cracks along the length near the seam, attaching a picture). I tried sealing it with QuickSteel steel reinforced epoxy putty suggested by auto shop. But the putty is coming off. the gaps are also increasing i think. What do you suggest to fix this leak? Will the tailpipe bandage like Permatex hold good, or need to replace the muffler? How much will the muffler replacement cost? 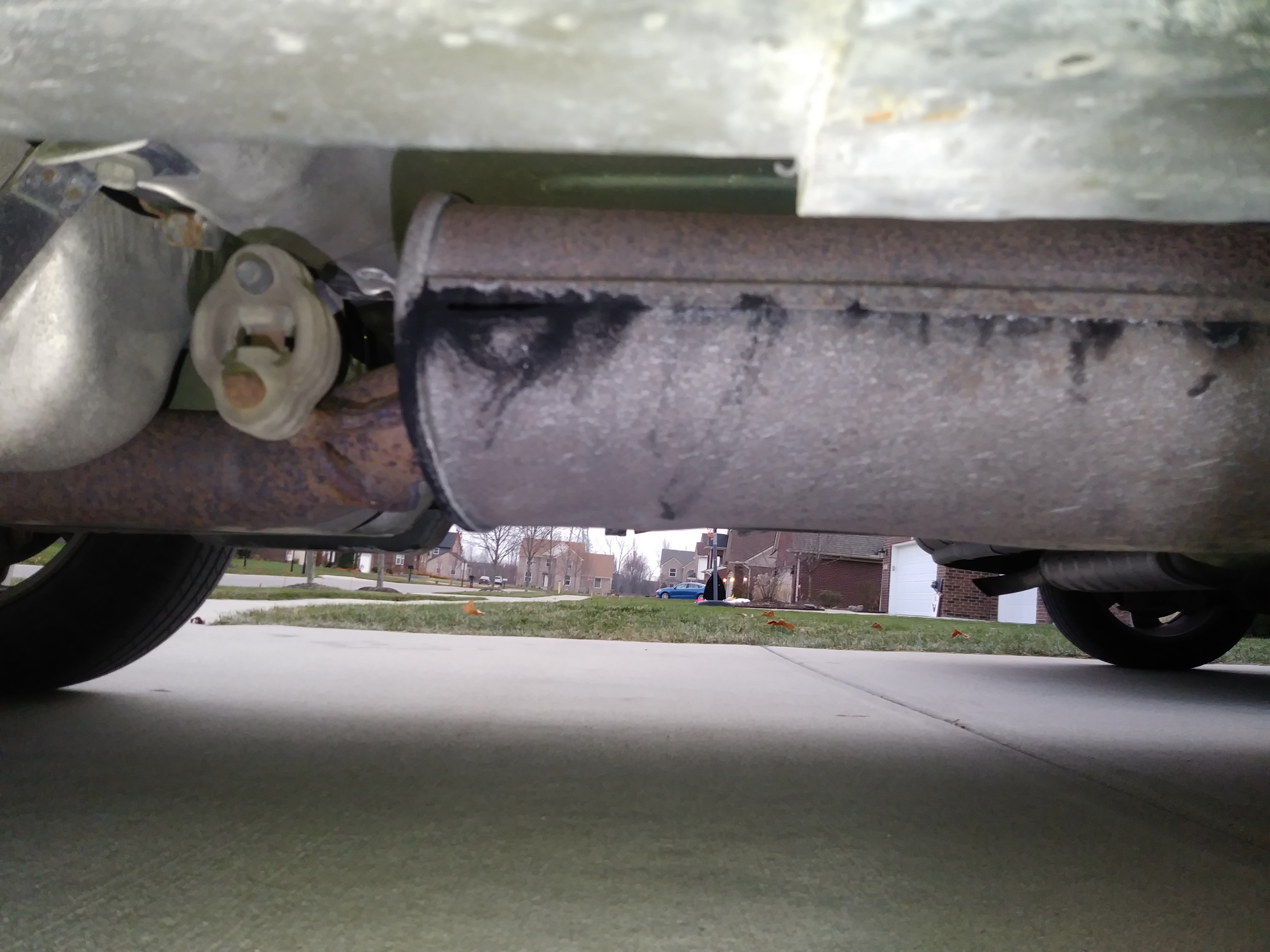 I’d just replace the muffler, it it’s the V6, a replacement muffler will cost about $50 for the part, and probably around $100 for the labor. About the same for the four cylinder as well.

If that is the kind of advice that shop is giving then stay away from there . Any decent muffler shop can replace the beyond repair muffler for a reasonable fee.

+1
The repairs that the OP is contemplating might buy him some time if the damage to the muffler was minimal. However, that picture reveals the automotive equivalent of cancer eating away at that muffler, and–just like with cancer–cosmetic approaches are useless.

Kids Grand Prix had a resonator and dual muffs. We removed the Rez and kept muffs and put in a pipe. Noisy. 2 yrs later I found a very nice Rez/single muff from a Buick for $12 at junkyard and put that in. Wow. So quiet.

Any idea how much noisy the vehicle will be if we remove the resonator and just weld a pipe? The putty I put finally came off and the mechanic is saying we can just weld a pipe and remove the resonator, you will not notice any difference. He showed me the SS pipes he welds and said he has done quite a few of these. One reply above (Cavell’s) suggest it will be noisy. so trying to gauge what will be the impact. some online searches gives mixed reviews, suggesting it may be noisy at lower rpm?
Also looking at the picture above is this resonator or muffler? I am finding it named muffler/resonator for it online. Thanks

why are you against repairing this vehicle properly?

A 2012 is worth fixing properly by replacing the needed parts. If it was ready for the scrapyard then improvision is understandable.

would a muffler be covered under the 8 year/80,000 mile emissions warranty?

I am also leaning towards getting it properly repaired. when he made his suggestion I was not aware of the effect. Once I started looking online and this thread I realized the noise issue. Not sure if it still covered under warranty. It has now 84000 miles on it.

I am also leaning towards getting it properly repaired.

Quit leaning and have a real muffler shop solve this.

Not sure if it still covered under warranty. It has now 84000 miles on it.

No it wouldn’t be. Time or mileage whichever comes first

Hang on now. For all we know (and indeed, it seems likely based on OP’s other responses) that the garage was asked for some quick/cheap/easy way to repair the muffler, without actually replacing it. If this is the question that the garage answered, then they cannot be condemned on this advice alone.

Bike Guy, any shop that would recommend a patch job on a muffler or any part of an exhaust system is not a shop that should be dealt with .

I’m saying, if OP said “what can I do in the short term before replacement?” or “I can’t afford a new muffler until next month”, then the garage could’ve said “use muffler patch, but get it fixed soon”.

My point is we’re only getting part of the story (“use muffler patch”), I wouldln’t be so quick to condemn the garage.