Clock jumps ahead 6 hours after 6 hours when setting. Have followed instructions carefully and cannot correct problem. Will the dealer know to correct this? What should it cost.

The dealer might know what’s wrong. For example there could be a technical service bulletin or it might be a problem they’ve handled before. For example, there’s a lead to the clock/radio that stays hot and it could be disconnected or loose. For that matter, your battery could be going bad. Take it to the dealer and let them handle it.

Does the clock suddenly jump ahead or does it run fast and gain six hours?
If the clock suddenly jumps six hours I would guess it is a battery problem. I had an Aerostar where the clock would reset to 12:00 sometimes when I would start the van. The battery suddenly died and the van wouldn’t even start with a jump. The clock worked fine after a new battery was installed.
On the other hand, my mother-in-law had a battery clock on her end table. It would gain an hour in twenty minutes. If your clock gains time it is most likely the quartz oscillator in the clock. I don’t think that can be repaired.

I can’t imagine why anyone would be interested in replacing a dashboard clock. People have been carrying pocket watches for 400 years, the ones we have today can also make phone calls. 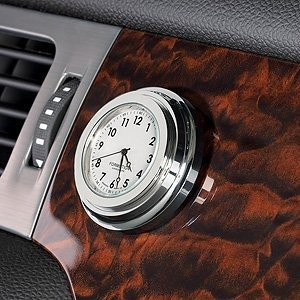 If it was 5 hours I would wonder if it was set to wrong time zone, DST enabled and automatic GPS update enabled. Might still be worth checking and disable automatic updates…

If the clock jumps 6 hours ahead, but then maintains the time, just do what we horn players often do–transpose. In this case, take it down a 6th.
Back in the early 1950s, all state buildings in Indiana had to have their clocks on Central Standard Time by law. However, all events and classes at state colleges and universities were on Daylight Savings Time during the summer months. When you were in a state supported building and looked up at the clock, you mentally added an hour during the summer months.

If the clock jumps 6 hours ahead, but then maintains the time, just do what we horn players often do–transpose. In this case, take it down a 6th.

Us guitarists do it too. But while it’s a potential workaround it doesn’t actually fix the clock. For a 9 year old vehicle @Tester 's idea is probably the best, simplest solution.

@davepsinbox_157004. Maybe @Tester solution is the best. However, for musicians that don’t want to transpose, they don’t make a transposing music stand.

@davepsinbox_157004. Maybe @Tester solution is the best. However, for musicians that don’t want to transpose, they don’t make a transposing music stand.

You mean they don’t make capos for horns?

This is just a shot in the dark, but…

Is it possible that this vehicle has a remote start system, and that it is malfunctioning?
I ask because, when my friend had similar problems with his Rav-4, it turned out that the factory remote start system was the source of the problem.