Doors will lock/unlock randomly while driving and hazard lights flash a few times. Car alarm will sound when opening the door to get in. Sometimes the lock/unlock situation comes with a one-sound chirp like the alarm tried to sound (while driving). Key or fob, it doesn’t matter. 100,000km odometer. Brand new battery.

Those symptoms can be caused by a failing body control module. 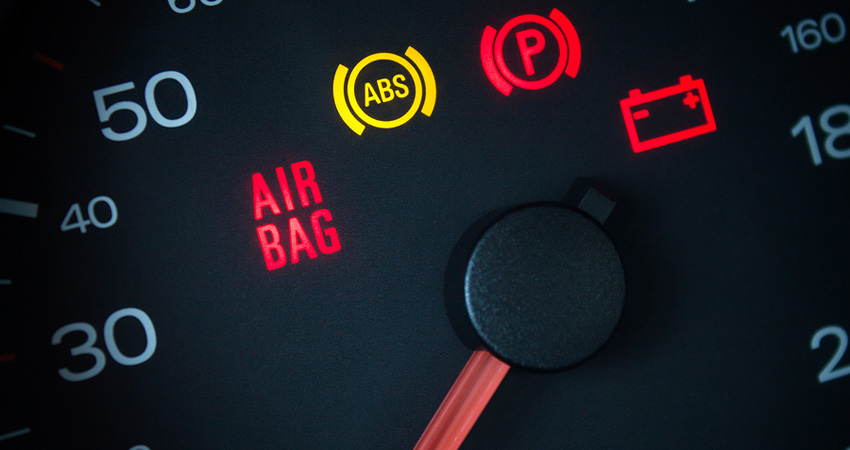 Your alarm is not getting the ignition input signal that notifies it that you are using the vehicle and or driving it… It is behaving as though it is parked, key off and alarm engaged.

If its an aftermarket alarm its easily remedied…but if its factory its a bit more difficult and or what Mr @Tester mentioned above.

The alarm is sounding before I even get to the ignition. It goes off as soon as I turn the key in the door. I have no idea if the alarm is stock or after-market, though the key fob doesn’t have an alarm button on it. Just lock/unlock. I bought it just a few months ago. If it’s an after-market, what’s the remedy?

If the BCM is going bad, will that show up on a diagnostic?

the key fob doesn’t have an alarm button on it. Just lock/unlock.

Then it must be an aftermarket system.

If it’s an after-market, what’s the remedy?

Find the best auto alarm/audio shop in your area, and have then disconnect the alarm, as well as restoring the wiring to its original configuration.

Make sure the wires going from inside the door and through the door’s hinge area of the car aren’t getting pinched or frayed.

Why are you opening the door with the key? Doesn’t the fob disarm the alarm when you walk up to the vehicle and press the unlock button on the fob?

Please describe the entirety of the issue you are having… i.e. you walk up the vehicle, push the unlock button on fob? Unlock door with the key?

Walk us thru it…

The alarm isn’t getting the disarm signal and is staying armed.

Look under your dash on the drivers side…do you see any switches or buttons that have been added?
Hell shove your head up under there and look at the steering column… is there an aftermarket alarm wired up there? Easy to see usually…

We still dont know if this is factory or aftrmkt alarm…

I looked up the wiring for the car and found the following website. It appears that it didn’t come with an alarm.
http://www.commandocaralarms.com/wiring/2001-2002/Kia/Spectra/1215.html

I found a brown wire that goes from the dash to the engine compartment and connects to a black baseball-sized object screwed into the firewall. I tried to follow that wire behind the dash, but it disappears into the rest of the wiring harness. There’s also a little device sitting on the dash wired into a black box directly under the steering column. 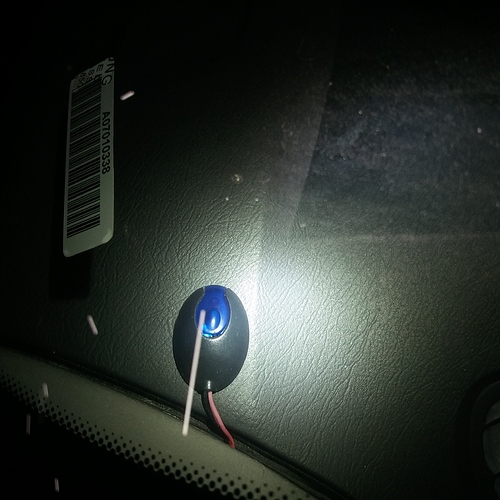 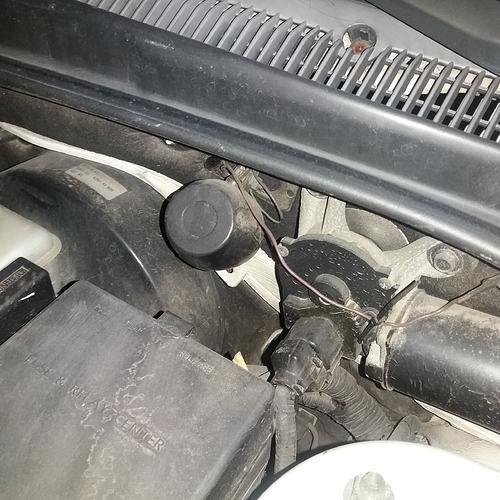 The first thing I would do is cut the wires to that siren under the hood, next remove that cheap alarm system.

THAT is an aftermarket system and that button is your “Valet Mode” button. To disable the system you turn your ignition key to the On position and then press that button until you see a red LED light up solid…this red LED is usually in the drivers view somewhere near the steering column.

By doing this you will put the system into valet mode…which is to say disabling the alarm system so that people unfamiliar with your car and system (such as a Valet) can use the vehicle without tangling with the alarm.

When the alarm is going off the starter wire is effectively cut in two via a relay…so…you may be better off disabling the system for now till you can figure out what system you have.

Always problematic when an alarm is foisted upon a new vehicle owner with no literature or info about the system. I’ve installed hundreds of these systems in vehicles all over the place…so in a way I feel partially responsible…lol

I’ll see if turning it off like that works. Thanks for the help. This car came with a number of after market gizmos. I have this keypad above my drivers side door that looks like an OnStar-style system and another wire going from the 12v plug snaking behind the glove box to - something. I don’t know yet if that’s the power for the keypad or something else entirely. 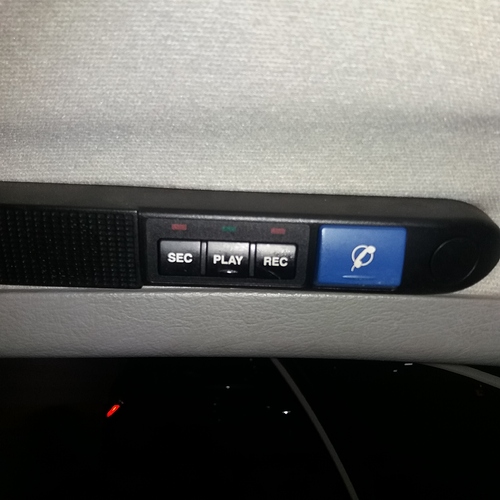 I also have a little box under the dash that says “shock sensor” that’s dangling by a single screw and wire like it was added later.

Do you agree with Tester that the door locks while driving symptom is the computer going bad?

You need to contact a good after market auto accessory shop and pay them to remove all that junk and see if that solves the problems . I can almost guarantee that you will continue to have problems until all that mickey mouse junk is removed.

I bought the car for $1700 five months ago when we moved and I needed a car in a hurry. I’ve put $150 in maintenance into it since then. Our normal family car was shipped here a couple months ago and at this point I just want to sell this one and be rid of it.

Your door lock issue is as I described… your aftermarket alarm is not getting the disarm signal… Read prior post… If this was a factory alarm I would agree with Mr. @Tester… but it is not and it seems a non Pro was in there “installing” stuff… so…

Got it. I’ll disable the alarm this week and see if that changes the door lock behavior.

It will… thats what that button is for…