Good point. But you gotta give him an A for ambition!

“OP’s either joking, or has no ability to do this”

My vote is for the latter

As I stated previously, I have a hard time believing that the OP is serious.
However, if he is serious it reveals that he has no real understanding of…unitized construction…the dimensions of V-8s vs the dimensions of the engine compartment of a small car…the effect of massively unbalanced weight distribution on a vehicle’s handling…and the torque capacity of the AWD system that he would be likely to select for this project.

“Symmetrical AWD” suggests that he envisions using a Subaru drive system, and although Subaru has the best AWD systems in the business, they were not designed for the massive torque of a diesel V-8.

OK, here’s how you do this. Buy a Chevy diesel 4WD truck with a Duramax V8, remove the body and bed, throw that away.

Take a Saws-All to the Civic’s floor pan and remove everything between the rocker panels, structural rails, floor, everything. Now you have a Honda shell.

You beat me to it, @Mustangman - something like this: 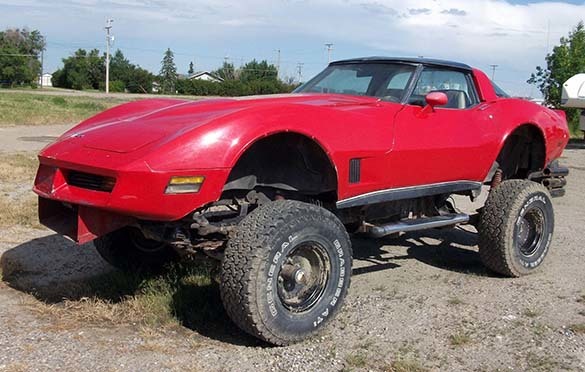 What a waste of a perfectly good Vette

Perhaps, but there’s tons of them around anyway, and perhaps the original chassis was rotted. It wasn’t exactly a rare vehicle.

I’m sure this conversion can be done. BBCA had a show on last night where James May drove a racing VW Golf. It had 4WD and 600hp. It was rallycross where 6 cars went gonzo through the flag. May’s goal was to avoid getting lapped. Tanner Faust was one of the other competitors, as was Petter Solberg. Faust schooled May beforehand in the finer points of rallycross. Then Faust passed May in the semifinal, making Captain Slow the only rallycross driver to ever be lapped in history.

You can buy a 300hp awd Golf R from a dealer today, pushing it to 600 hp is a lot less of a stretch than putting a huge diesel in a Civic. But you are right, for unlimited $$ anything is possible.

May was driving a heavily modified Golf R. While Faust was explaining the controls, he pointed at a toggle and said after you get going, flip this switch and all hell breaks loose. After the race, flip it again and the car becomes a regular Golf R again. The switch enabled the racing turbo that took it up to 600hp. The big message for me was what great drivers the professional rallycross drivers are. Clarkson, Hammond and May are all excellent amateur drivers, but May looked silly compared to the pros. Maybe that was the real point of that segment.