1996 Buick LeSabre HVAC fan will not shut off

My son’s car overheated yesterday due to a sudden crack in the radiator. He had it towed to me. There was no evidence of a blown head gasket or cracked block, so I replaced the radiator. Since the battery was dead, I put the charger on it. When I did that, the heater/AC fan began to blow. The only way I could get it to stop was to disconnect the battery. Even the ignition switch had no bearing on the fan.

I do not know if the overheating and this problem are related. It may be just a coincidence, but it is odd.

This car has a slide to regulate the blower speed. It is not one of those “Select a temp” automatic ones. It will blow cold air out the AC vents when AC is selected, but when the OFF button is selected ambient air goes to the DEFROST vents.

I suspect a relay is stuck, but what relay, and where is it located?

You should be able to take the blower fuse out to stop it-might be under the rear seat though. I’m pretty sure what it is is the blower control module. Its up under the dash on the right hand side someplace-if I remember right screwed into the plenum. My Olds was doing the same thing and got one from the junk yard for about $25 and 30 minutes to put it in. When it shorts out it is connected directly to battery power so nothing will shut it off except the fuse or disconnecting the battery. The first time mine did it, pulling the fuse got it to reset but then several years later nothing would stop it.

I’ve seen some videos on you tube of General Motor cars melting the HVAC controls on the dash. The controls probably melted in a closed circuit causing the system to run forever. Pull the unit out and look at the connections for melting. Disconnect the battery first. The power switch for these systems draw a lot of current.

I had rolled the year model off the screen. Excuse me. That model has the solid state speed control I believe.

It has slides to change the temp and fan speeds rather than a 1-2-3- HIGH switch. It is a “Custom”, not a “Limited”. I think the LImited has the thermostat where you set the desired temp.

I was a little off in my description. This is what it looks like. 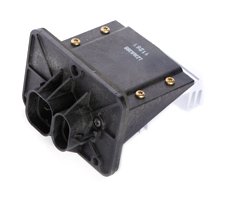 This is different than the resister. The resister steps the fan speed down but this is something different. Mounts in the plenum under the dash. I don’t know if you unplugged it or not if the motor would stop. I just pulled the fuse on mine till I fixed it. I’d have to check the service manual to see if there is also a resister. Just google it but they are pricey and may not be available for a 96 except in the junk yard.

Is it accessable in front of the glove box if I drop that all the way down, or do I get to it from under the hood? I’ve seen them both places on other cars.

Edit: Sorry, the blower control module is also the resister and controls the fan speed. Some call it a resister but the proper name is the module. Take down the trim panel under the glove box to expose the heater plenum and it should be right there next to the blower. Square plastic with a couple connectors on it and two screws holding it in. Some claim that the connectors get corroded and burn the connectors but that wasn’t the case for me. I think Rockauto has them but really I’d just go to a junk yard unless you plan to keep it for 20 years. You shouldn’t have to remove the glove box at all, just the trim panel.

OK, I’ve been standing on my head under the dash. Maybe that has effected my brain. My friendly local salvage guy said it was the piece with four vacuum lines of various colors coming out of it. He gave me the part to try. It didn’t fix it. I see another part above the blower. It has a green plug. I’ll pull it next.

Well, that didn’t fix it. There was nothing on that module that went inside the plenum like I’ve seen on other cars. Removing it completely from the system has no effect. The fan still blows regardless where the switch or ignition is.

I see six relays under the plastic cover on the firewall. Which one powers the H/AC fan? I tried pulling one, closest to thethe fender, and it appears stuck even after destroying the clip that holds it in.

It was the relay, third one over from the fender. I had a used one on hand. Think I’ll leave him an extra in the glove box.

No no no, that’s the HVAC programmer. That’s not the problem. Its not under the hood. Take a look at the picture above or check out Rockauto for what it looks like.

I dunno Bing. I pulled that relay. The fan stopped blowing. I put in another relay, and it works perfectly with the switch. On, hot, cold, and off. What more could I ask?