Replaced upper and lower control arms, shock, spring, and stabilizer bar linkage. I saw that the plastic inside of the wheel well had come loose and it was bumping around, so I got some hardware and reattached it.

Its a wobbly sound, like hitting/stirring a 5 gallon bucket with a stick, when I hit any little bump in the road. Definitely coming from both sides. Or at least seems that way.

When you tightened the hardware for the rear suspension components, was the vehicle raised, or sitting at ride height?

It was on jack stands. After I installed everything, I had it aligned, so the control arms and shock were definitely retightened.

How would this have anything to do with it. I didn’t replace the spring isolators, im starting to suspect them, but I think it’s a long shot.

If track control arm bushings are fully tightened while the vehicle is ‘hanging’ (e.g. figure A; upper position on a car lift), the new bushes will be ‘pre-stressed’ when the vehicle is returned to...

That’s a good tip, thanks! But I don’t think it has anything to do with the noise.

These have bushings that aren’t touched during an alignment.

Was the hardware for these bushings tightened while the vehicle was raised before the alignment?

Yes they were torqued in the air the upper control arm is an adjustable type, that apparently they had to remove in order to break the adjuster free.

So how do you figure a preloaded bushing is making a noise that sounds like I’m hitting a bucket with a baseball bat?

You can make ride height blocks out of 2X4’s for this type of suspension work. 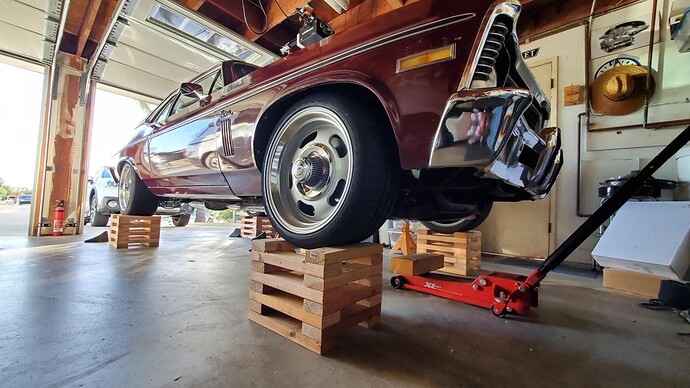 eplaced upper and lower control arms, shock, spring, and stabilizer bar linkage. I saw that the plastic inside of the wheel well had come loose and it was bumping around, so I got some hardware and reattached it.

Turns out that was not the noise I’m hearing.

So, you like needlessly replacing parts, just keep replacing things, you’ll get it eventually. You need to get it properly diagnosed.OTOH you have likely already spent enough in time, effort and parts not fixing the problem. But hey what’s a few more $$ anyway.

So how do you figure a preloaded bushing is making a noise that sounds like I’m hitting a bucket with a baseball bat?

It may, or may not, but at least you now know the correct way to install some things, wether you need them or not.

Wtf, I had it diagnosed. Every bushing had gone bad, and they recommended the springs and shocks because they were 13 years old. The shocks definitely were bad, the springs, I’m not sure, but because of the setup, they said new springs would help with keeping the camber in alignment. It was devouring tires, so best case was to replace the entire rear end. I mean, I spent $60 on a diagnosis, and $700 on all moog parts and some koni shocks for fun, I’m still way ahead. The attitude on this site…

I had it diagnosed

Would have been nice to know about the diagnosis right off. For what’s it worth I bet it’s the upper strut mounts making the noise. We see so many parts replacers here, when asked what did a mechanic say they reply “I didn’t take it to one”. And you post read like one of them. Before you start talking about attitudes, get your own in check

The (censored) attitude on this site…

Concur w @PvtPublic above, pretty good chance noise is some sort of problem w/ upper strut mount(s) at rear. Before removing rear struts for a look-see, suggest to first remove everything from trunk that’s possible to remove, including spare tire/jack. Using a good flashlight, look for places in the trunk that something could be rattling around. I’ve had noises like this from golf balls rolling into recesses around the wheel well/top strut areas on my Corolla.

Are you able to reproduce sound by pushing down on the rear corners? Rumbling noises from rear could also be from the wheel, tire, or wheel bearings. Anything unusual w/rear tire tread appearance? Might try removing the wheels and shaking them, maybe there’s a pebble got stuck inside. Or swap rear and front wheels as an experiment. If the sound is from one faulty rear wheel bearing, it would usually get worse turning in one direction than the other.