You now have a chance to buy a true automotive legend! 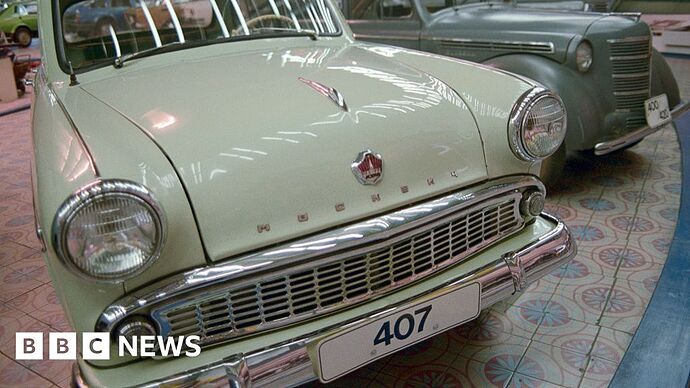 It is reviving the Soviet-era Moskvich brand, though the car's design has been updated.

Ok here’s my plan. I’m tired of old cars. I’ll try and find a Russian kid who is fleeing the draft. Then have him drive one of these new cars over the border where I can get at it and get it shipped to me. Hopefully with a few spare parts in the back seat. I’d go myself but last time trying to get a visa was very difficult and you’re watched all the time.

I’ll be a hit in the neighborhood and ready for all the parades. I wonder if it comes in black though? Oh well beggars can’t be choosers so any color will do. Just hurry.

any color will do. Just hurry.

lol … I occasionally see a Moskvich, usually parked outside a theater with a sign on it saying what it is, but sometimes on the road in the SF Bay Area. Some car collectors like Soviet era cars. Probably pretty easy to diy’er repair if parts available.

I really doubt if you see a Moskvich more than once in a blue moon. Only 100 were brought to the US .

I really doubt if you see a Moskvich more than once in a blue moon. Only 100 were brought to the US .

Yes, but who would turn his nose up at the possibility of being able to obtain Soviet-era “technology” from the '50s or '60s?

This might be your chance to embrace technology that is outdated by 30 years–or more!

This might be your chance to embrace technology that is outdated by 30 years–or more!

On of the technical editors (Ed Hughes) of a UK classic car publication routinely writes about his own Moskvich diy’er jobs. Repairs seem easy enough, but some unrelated problem soon crops up. Of course that sort of thing not uncommon on most all old cars. I think he used to drive/fly to Russia to get used parts, but probably not as simple to do these days.

It’s hard to believe that any US citizen could buy one and impossible to import it. Even if you could get it through customs it wouldn’t pass government safety requirements. I’m sure you know this @VDCdriver, but maybe not everyone that reads this thread does.

I think you take the post a little too seriously.

I’m more concerned that someone else does. I’m sure it wasn’t a serious suggestion from VDCdriver. Maybe as you suggest I should have just left it alone.

Didn’t see any Moscviches this Thanksgiving holiday, but did see a pristine 2CV.