Winching a jeep 100 feet straight down off a cliff

I’m reading this book “The Monkey Wrench Gang” and in one part the protagonist is trapped with his 4WD jeep on the rim of a 100 foot cliff, no way to get away, with bad guys w/guns approaching from below. So he ties the winch cable around a juniper tree growing on the rim , gets in the jeep, backs off the cliff, and winches the jeep down 100 feet in mid-air, 'til he and the jeep reach the bottom of the canyon.

Is this actually possible? To power the winch, wouldn’t the jeep engine need to be running to accomplish this feat? It’s a 1972 book, so the Jeep would have a carb. How could a carb work when it is oriented sideways like that? Or could you winch a jeep down a 100 foot cliff with just the battery alone?

I have used the reverse process to pull out mulberry trees, possible, but would I bet my life on it, no way.

I think you could do it. Going down would be less drag on the battery. If it were a gear driven winch. Trun off engine and brakes and engine compresion work too I think. A friend use a battery powered winch to stand his jeep CJ5 up so he could pull the trans. It was winter and no garage. A big oak limb did the job.

The winch is battery powered. Possibly the tree would hold but now the question is, how did he get the cable unhooked when he was at the bottom? The cable above would be wrapped around the tree so that’s out. The cable on the winch would be attached to the winch unless he used it all up and just unbolted the cable, cut it, or unbolted the winch. But if the folks were coming up from below, I don’t imagine he would have much time for all that. Now if he would have looped the cable around the tree then back to the Jeep, no problem except then he’d need 200 feet of cable.

I often run across these kinds of things in novels where all the pieces don’t fit. I usually just ignore them or sometimes send a note to the author. Sometimes their sources aren’t the best or they just overlook some things while they wrap out one book after the other.

fastest and easiest way to get a Jeep to the bottom of a cliff is to simply drive it;-)

My old Bronco had an 8,000 pound Ramsey winch similar to this 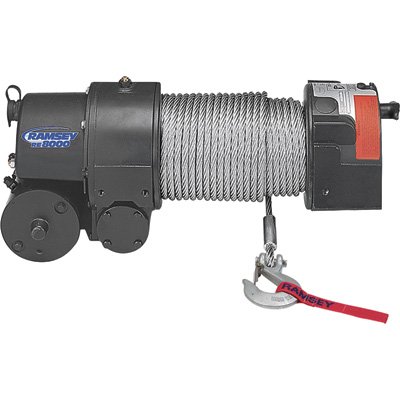 that used a considerable amount of current to power feed the cable out S-L-O-W-L-Y.

@Bing … interesting comment … re: retrieving the cable … according to the story line, it was important to leave no trace of how he escaped, in order to confuse his pursuers. So it was imperative to quickly retrieve the cable once he got the jeep to the canyon floor. The winch had 150 feet of cable. Enough to reach the ground, but not enough to just loop the cable around the tree. But he did have a 150 foot length of rope with him, and that’s how he did it. By tying one end of the rope to the cable at the tree end, somehow he was able to release the winch cable from the tree. The book didn’t explain exactly how he did it, but folks with rock climbing experience might know what kind of knot would work, so that you could pull on the rope, and the cable and rope would both come free from the tree.

Edit: Thinking if I were in that situation, and didn’t know what knot to tie, and didn’t have time to come up with a better sol’n, I’d probably just wrap the cable tightly around the tree 3 or 4 times, tie the rope to the free end of the cable, and be sure to keep tension on the rope during the lowering process. At the bottom, once the tension was removed, hopefully I could just pull on the cable and it would unwind from the tree, pulling both the cable and the rope down. Think it would work? Seems like the most likely outcome, either I couldn’t hold the cable tight enough with the rope and it would unwind from the tree I’d fall with the jeep to my demise, or the cable would get so fixed to the tree from the weight of the jeep I’d never be able to unwind it from below.

Do these types of electric winches have a power out feature? Don’t they usually just free-wheel out? Then you engage the drive dog and power the cable back in…

That’s something you’d definitely want to know about your winch, if trying this yourself! lol …

Tanner Foust tried this trick on Top Gear usa when they were going through moab, a Jeep would have a better chance of not getting the front bumper wedged when you got to the bottom (he was winching a Town Car down a cliff and ended up getting the car stuck with the nose pointing at the ground. His was a fairly standard looking electric winch mounted on the rear of the car

It’s certainly possible, and as OlyDoug said, it’s been done on TV. To have it succeed, retrieve the cable without climbing back up, and have it drop your Jeep in a drivable position at the bottom? Very iffy. Like something from MacGuyver… and as anyone with any common sense knows, MacGuyver would have been dead in real life by the 2nd episode…

Keep in mind Top Gear only was trying to get the car from the top of the cliff to the bottom with minimal damage, if it had been possible to simply drive the vehicles down a slope they would have found a way.

Aha, Here’s how he could have done it. On the end of the winch cable is a hook with a safety latch. If he tied the rope to the hook and advanced the rope as he was lowering himself down. When he got to the bottom, he would need to continue to advance the cable and pull on the hook with the rope. Only problem is the cable is 150’ so he would come up 50’ short at the bottom. He’d either have to pull himself up on the rope 50’ to release the hook, or unbolt the other end of the cable on the winch and throw it all in the jeep until later. It could be done though.

He didn’t climb back up. When he got to the bottom, he stayed there, and somehow retrieved both the rope and the cable from there. The book implied he had some method to tie the rope to the cable or its hook mechanism – before he started down, up at the tree side of things in other words – and once down on the ground below w/the jeep, he released all the tension from the cable. Then he was able to jerk the rope from where he was below, and that released the cable at the tree. I expect the people who make winches have anticipated this problem, and they offer some kind of gadget to place on the cable hook which allows this remote-rope-release to be accomplished.

There was a problem with his method it turned out though; once released from the rope and tree, the cable came crashing down and broke the jeep’s windshield.

There’s a spring clip on the hook to keep it from slipping out so he would have had to disable that before decending. So I suppose it is possible by tying the rope to the hook without the spring clip intack, putting the rope around the tree in the opposite fashion, then slackening the cable at the bottom he could pull the hook away from the cable. Most of the winches though have only 50’ of cable with the big ones having 85’, so he would have had quite a big winch with 150’ on it.