Some repairs can be made easily and with little cost. Such as the almost color matched slip sheet that will serve as a hood. Other repairs can actually be upgrades. Such as this bumper cover repair. With a little imagination and a few sheet metal screws, you can turn your sagging bumper cover into a trendy wing that invokes thoughts of Japanese street racing, and even harkens back to the days of the Plymouth Superbird. 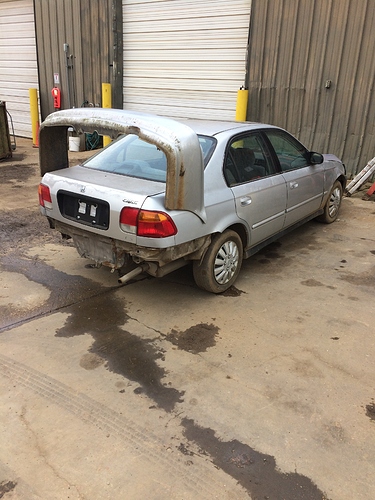 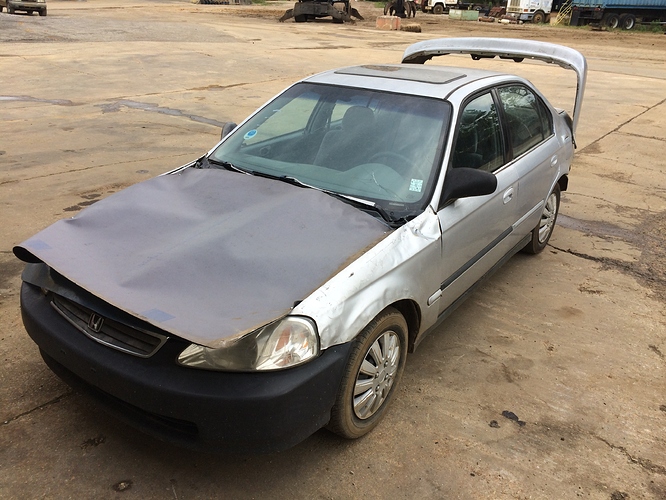 One of my crane operators did this. He drives the scrap car back and forth to his tracked crane that he doesn’t like to move. The sad part is, the owners scrapped this Honda with 170k miles. Best I can tell, it needs some cosmetic TLC. It seems to run well and the AC works. No idea what happens after 2nd gear, though. But kudos to him for ingenuity.

It needs a big light bar on top to look right.

Put a Flux Capacitor in it and a Mr. Fusion on the back and it’s good to go.

Being able to perform repairs yourself opens up a world of possibilities not practical if you’re paying someone else to do them. Labor is the primary driver in the overall cost to do anything, including car repairs. Having ready access to cars that have been prematurely abandoned and the parts to resurrect them would be icing on the cake! That being said, I probably wouldn’t admit to doing that kind of thing to a car let alone be caught driving it, even if just around the scrapyard…

I suppose it looks better than a dragging rear bumper fascia and no hood. If you squint.

Still, it’s a shame. I think I could’ve resurrected that car from the dead and provided someone cheap transportation if it weren’t for a few company and state (once it’s declared scrap, the vin # is “destroyed”) policies. I probably could’ve made a couple of hundred bucks too. A win/win in my mind. But those days have passed. Did I mention the AC was cold?