Who is the best used car salesman?

Anybody up for a challenge?
A guy around the corner from my shop does a fair bit of wheeling and dealing, almost all in old VW’s.
A few weeks ago, he came back from a 1200+ miles roundtrip in Sweden with these two “cars”. A -56 and a -59.
He paid just over 4000 US dollars for them.
He sold the red one yesterday to a guy in Germany for - hold on to your hat - almost 3700 dollars to be restored and there are 3 guys in a bidding fight for the other one and they have exceeded 3800 dollars now.
It’s crazy.

Well, if I remember to add the fotos, it might work better. 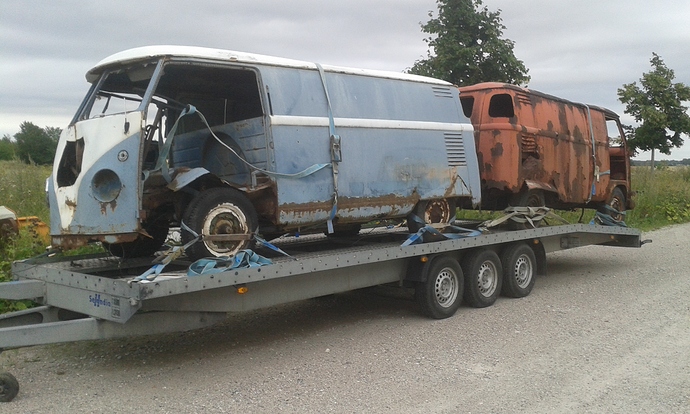 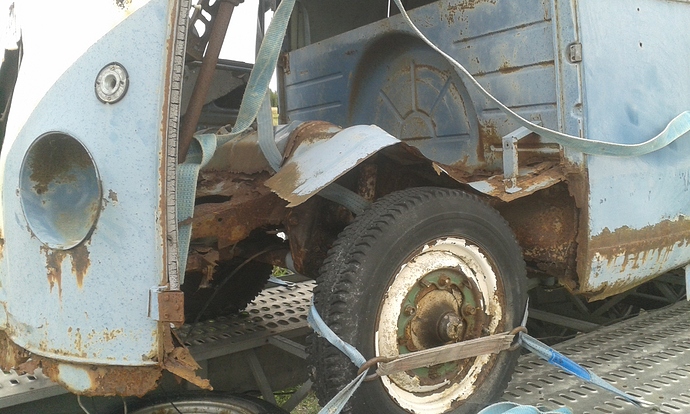 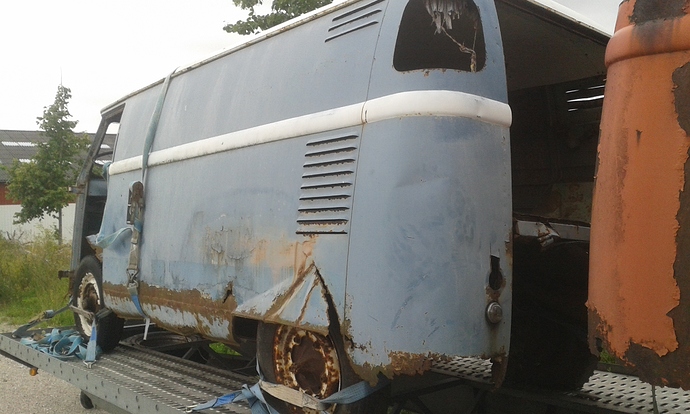 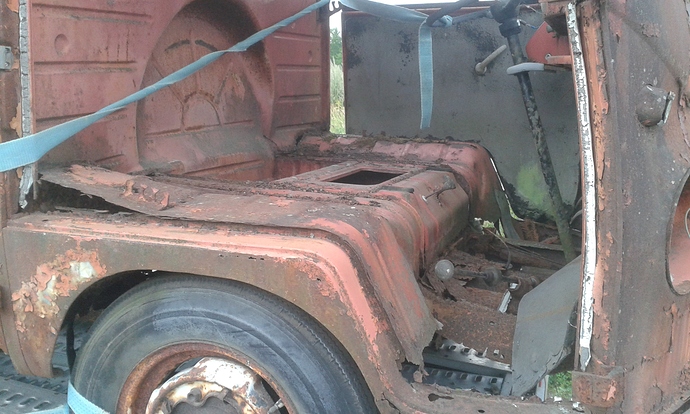 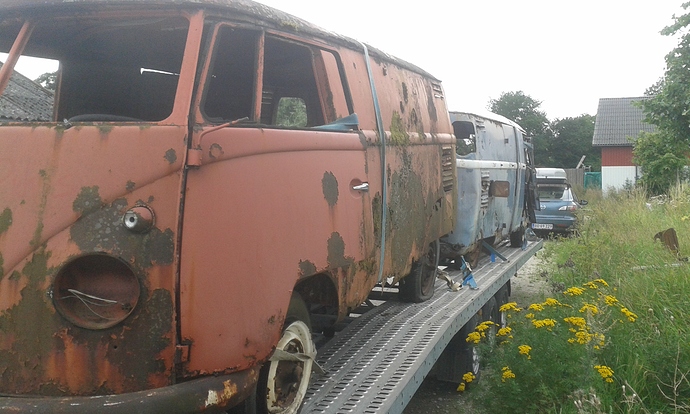 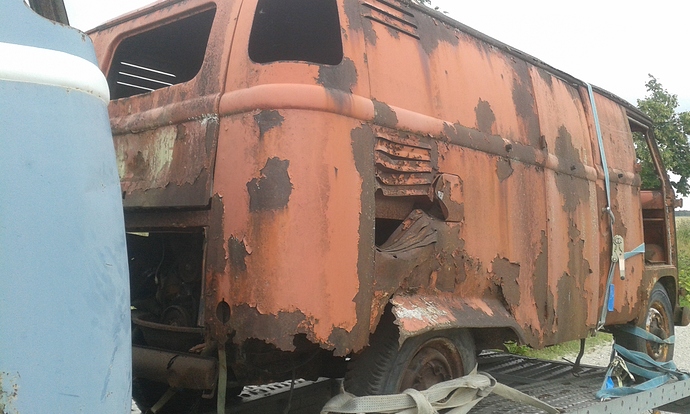 My mother seems to always get asking price when she sells a car on the private market, but maybe it’s because of the “little old lady” myth.

Really old Beetles are pretty collectible, I’m not surprised that he was able to flip them for a good profit. Sounds like he knows them well, so he knows when he’s found a bargain.

Funny thing, if you give him a wrench in his hands, he’ll stare at you and ask: where is the on button?.

That orange one…there doesn’t look like anything usable is left. All panels look rusted through, or nearly.

The people who do a restoration project on a vehicle like these either have enough money that cost is no object or they’re going to make a huge profit when they sell the restored vehicle.

Wow. I posted before the photos showed up. While the Microbus brings crazy money once restored, those have a loooooooong way to go!

Anything can be saved with enough time and money. I love air cools and have owned 2 VW Type 2s (59 and a 63) but I don’t know that I’d go that much on these. Maybe the desirability is because both are panel vans without windows. My 59 set me back a 100 bucks and the 63 wasn’t much more than that.

I can’t say that I’ve ever seen a Type 2 panel bus even when working for 2 VW dealers some years ago. They are bringing some crazy money nowadays. Not long ago a small window 56 VW Bug went for 155 grand. If someone had mentioned something like that back in 56 they would have been consigned to a rubber room.

There’s a “Westfalia” for sale 30 miles from here. They’re asking in the teens. It’s been for sale for quite a while. I get the appeal - pretty rare, kinda neat. But then I start to think about what I could get for similar money that is more usable or even more desirable (to me). I’m not sure my region is willing (or maybe able) to shell out big money for a VW just yet. People pay up around here for old Broncos and Blazers, though. People with disposable $.

I understand more Windows means a higher sales price. I guess cargo vans do well, too, despite a lack of windows.

Yeah… those are fairly rare vans. They aren’t quite old enough to be the barndoor… really valuable. Every panel has replacement parts, it just takes a LOT of work. I saw a decent shell go for $15K.

Even VW is getting in the act and offering factory rebuilds of the old vans, though I didn’t see any in that bad of shape.

Wow. I posted before the photos showed up.

So did I with my first comment, but I can see them now.

Well that one is gonna need a new seat for sure. Makes me tired just looking at them. Guy down the street has an old bug that he starts up once in a while, so I can look at it anytime I want without actually having to fix one.

I did some of that stuff on a panel, but not as neat as those will have done. Its body wasn’t terrible, except what touched the ground. An enterprising kid found it abandoned/stripped, a bullet holes… patched it up and drove from Kansas, Iowa, Ohio… somewhere around there, to a Dead concert outside Eugene. It broke and so were they. Long story short, dad ended up w/ a rusted bottom van for the price of a couple bus tickets and eating money. It was titled as '61, but I think 58 was closer. He hated VWs (we owned a beautiful van) so was all for scrapping it.

I got her running cheap enough… mostly labor. Holes were patched with bits of tin welded in… including an old sign for the passenger’s floor. It was never a thing of beauty, but that makes people nostalgic for their old wanna-be hippie days that never happened. However, $130K is where sentimental becomes mental.

Wow. If one of my buddies rolled up with those and told me he spent $4000+ I would think he lost his mind. That he actually turned a good profit on them without much effort at all is astounding. The red one reminds me of the home shows where they basically tore the entire structure down to joists and studs before rebuilding and my first thought is, what have you really saved? I would have razed it and started over…the key with vehicles is the VIN and saving the skeleton of an original. The rest can be rebuilt but that is going to be a labor of love…

That orange one…there doesn’t look like anything usable is left. All panels look rusted through, or nearly.

Yeah. By the time the buyer’s done restoring it, it’ll be like that old joke – This is George Washington’s axe. I had to replace the handle… and the head. But it’s his axe!

For 99% of cars that age in that condition, it’d be better to send them to the recycler. But old VW vans seem to be worth 10X what I’d expect, once restored. That creates the $$ that make it worthwhile.

There’s a shop called Buslab in Oakland, California that works on these things exclusively. When I drive by there during the day there can be 25 of them parked along the curbs outside the place, so I guess they bring them all inside the fences at night and roll them out of the way every morning. They specialize in putting Corvair engines in place of the VW originals.