When an ordinary car is not enough

…there is this $1.1 million SUV, created by a Latvian entrepreneur.

Somehow, I don’t foresee many sales of this over-the-top vehicle, but since neighboring Russia is so dangerous, and because there are so many newly-minted millionaires in Russia, perhaps he will sell a few: 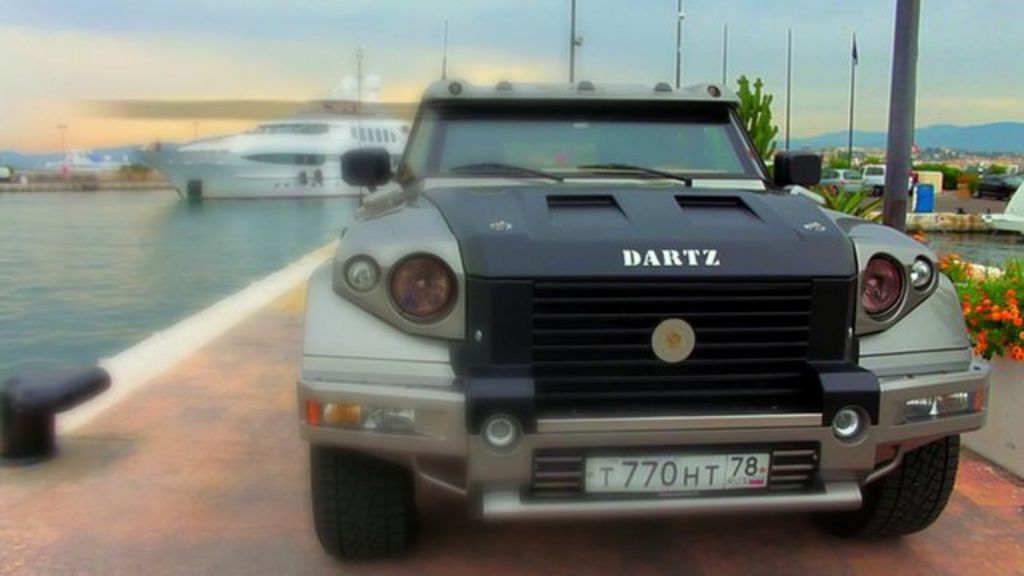 When an ordinary car is not enough

Who would buy a car like this? A look at Dartz, which makes exclusive cars for those willing to spend at least a million dollars.

I’d get one in a heart beat, but where would I put my anvil!!!

It’s over-engineered, over-styled (ugly?) and very over-priced. I’m glad that I don’t live in a country where I would need a monstrosity like that.

One might WANT one… The statement from the builder, rich customers want something unique.

Rarely does one go broke catering to the whims of the very rich!

The burdens of immense wealth are difficult to bear. So much money and so little time.

Did he have to make it so ugly? There are any number of good car designers in the world who would have found a heavily armored car an intriguing challenge and come up with an attractive vehicle. Instead of this derivative mess. The guy who makes them does sound like he knows his customers.

It’s so ugly that the Prombon belongs in a Sacha Baron Cohen movie, too. He has to feature it in another movie soon.

I’m not sure, does not seem to get good gas mileage. Anybody done a budget analysis of this against the Prius?

Well, that thing is about as hideous looking as it gets. It’s in Nissan Juke territory; or worse.

It’s not my cup of tea but heck, if the owner wants to spend his money on that rolling abomination then power to him and the vehicle builder has obviously found a niche market that pays.

The practical part could well be that some high profile money guy is a target at times and that thing could save his bacon so the sense of security could be worth that million or so Euros to him no matter what it looks like. The owner may feel the looks alone mean intimidation; keep your distance.

I seem to recall reading an article a couple of years ago about “the lizard” effect, for trucks and SUVs. The idea is that this sort of ugliness, such as all that cladding you see on some pickups and SUVs gives it, at least in the owner’s eyes, a certain “toughness” or some such thing. I think that’s the case here. It’s so ugly, it’s tough.

Ugly is as ugly does…

Ever seen some of the massively hideous body kits offered for Corvettes or Miatas? People actually pay to have this junk installed to make their cars look “better” or just different. One man’s pretty is another man’s Edsel, Pacer or Datsun F10.

It’s over the top on purpose, the kind of vehicle you buy to show how wealthy and powerful you are. Some would just buy an armored version of a Mercedes or Range Rover but if you want something different you go for the Dartz.

Maybe whoever buys this monstrosity can wear their utterly pointless $17,000 gold “iWatch” while driving it to get the full effect: https://apple.com/watch/

Anybody else here remember who the first civilian to buy a Hummer (the REAL hummer, the civilian version of the military vehicle) was? Arnold Schwarzenegger!!

Yup, it’s a “mine’s bigger than yours” vehicle. If he has the cash, and that’s what he wants, what the heck, why not?

Anybody else here remember who the first civilian to buy a Hummer (the REAL hummer, the civilian version of the military vehicle) was? Arnold Schwarzenegger!!

He also runs it on Bio Diesel.

You want bad taste? Just look at ANY house built in the last 30 years.

I thought we were talking about automobiles . . .

My house was built 17 years ago and it is gorgeous.

“You want bad taste? Just look at ANY house built in the last 30 years.”

Just like ALL generalizations, that statement is not accurate in its totality.

Like jtsanders, my 18 year old house is both well-built and extremely tasteful.

I wonder if the person who posted that gem is also prone to generalizations about…races…ethnic groups…religions, etc. Houses, like people, deserve to be individually evaluated, rather than being lumped into wildly inaccurate stereotypes.

While not wishing to delve into choosing up sides and arguing about new vs old houses I will comment that trends in home acrhitecture and amenities in my area of the coutry have gone to some Maseratti extremes. The multi-gabled high pitched roofs are the most obvious affectation and several friends have found that replacing such a roof is more than double the cost of a single ridge 5 over 12 roof that was common for 100 years or more.

Also, when looking for a larger home 20 years ago I considered building and asked a general contractor to give me estimates on 3 designs from some magazine my wife found. There wasn’t much in depth analysis of the architecture as the costs were obviously $60/sq ft of heated floor space even on one design with a third of the floor space from flooring the attic and adding 2 dormers.