My 2004 Tacoma is having trouble maintaining rpm.
I had a check engine light on for a obd sensor but it went off when I unplugged my battery a week ago and hasn’t come back since.

The main problem is that it loses rpm quickly whenever I take my foot off the gas. It drops to around 1000-1100 rpms immediately even when I am going 50mph. My car idles at around 600 rotations.

I’m having trouble climbing hills dropping rpm, but is seems to drop fastest when going down hill after I take my foot off has.

The shifting seems to give some slight trouble too but it’s not apparent enough to say for sure it’s not caused by the low rotations.

What could it be?

When the code comes back, find out which one it is. Then there will be some kind of hint and the guesses may be better or at least available. We also don’t know what slight trouble means. Describe it when the code is identified. Right now nobody will dare to guess what the problem is.

And yes it’s a automatic

Check your fuel filter. A dirty one can restrict fuel flow. Maybe your fuel pump is on it’s way out. A mechanic can hook up a pressure gauge to the fuel rail to see if the fuel pressure is in range.

I agree, try to get that trouble code. Even if it’s not visible, sometimes the computer will still “store” the code so you can use a reader to find past codes. Throwing out ideas, it might be a throttle position sensor, mass air flow sensor, idle air control valve. Good luck.

The main problem is that it loses rpm quickly whenever I take my foot off the gas. It drops to around 1000-1100 rpms immediately even when I am going 50mph.

I’m a little confused. What is it you think the RPM’s should be doing when you take your foot off the gas? You say it is dropping to about 1000 rpm, but from where? you are decreasing power demand from your engine, so RPM’s will decrease.
Is the speed decreasing dramatically when this happens?

The second scenario feels more normal. The first scenario feels like an immediate loss of power and like the engine rotating at that speed so quickly is abnormal.

It’s not a gradual tapering off power is an immediate fall.

Then the is also the other symptoms like weakness going up hill. The car feeling weak

To clarify my lack of understanding:
you’re saying it drops from 2200 rpm to 1000 rpm when you take your foot off the accelerator pedal. Is this correct?

When this happens the 8 out of 10 times, does the actual vehicle speed decrease as rapidly too? like it would when the brakes are applied? Or does vehicle speed hold somewhat steady (I know vehicle speed will decrease, but does it correspond with the rpms at all?)
When this does happen, and you are getting up to 50mph, does it feel like the engine is straining harder to get to 50 than when it doesn’t happen?

I had transmission fluid leak coming from radiator a while back

That’s more serious than just some trans fluid leaking out into the radiator. The fluids go both directions. So the transmission may have got a big dose of coolant from the radiator, which could have done serious damage to the various transmission moving parts. My guess, that’s what is causing your problem.

It was a bolt on the radiator that needed to be tightened on radiator. No coolant got into transmission

Good, not just good, very good. Problem with unexplained rpm drop remains presumably, true enough, but at least transmission internals are coolant free. I wonder if problem could be the mechanism linking the throttle to the transmission, the part that downshifts the transmission when you step on the gas to pass a car quickly? Askyour shop to take a look at that. On my 50 year old truck it’s a thick hollow rod, not sure how it is done on your modern Tacoma though.

Sometimes it feels like it’s straining when it gets up to 50 but not hard. Just like the car is weaker than before… There are times when it gets to 50 without any station though. It doesn’t seem to forecast whether or not when I take my foot off the gas that the rpm will drop off though.

However I may have to do more driving and get back to you too answer that last question. For now I’ll say whenever there is a strain to pick up speed when I let off the gas the rpm almost always drops fast.

I’m thinking this is the fuel pump or transmission. I called a repair shop and they wanted 90$to diagnose it it.

Thoughts on it being the transmission is it happened too abruptly to be the tranny. I’ve had transmission problems usually they slowly start not going in gear, or shifting. Etc. I’m hoping it’s not the tranny

Like i said before I got the code from my AutoZone and looked it up and it was for the exhaust one sensor. I don’t know if that would cause this, I heard a obd scanner going bad could cause bad shifting between gears.

I’m thinking this is the fuel pump or transmission.

Thoughts on it being the transmission is it happened too abruptly to be the tranny. I’ve had transmission problems usually they slowly start not going in gear, or shifting. Etc. I’m hoping it’s not the tranny

Like i said before I got the code from my AutoZone and looked it up and it was for the exhaust one sensor.

I’m guessing clogged or restricted catalytic converter.
OR:
Quit guessing and getting guesses. Get it looked at by a professional.

When you lift off the accelerator, the Idle Air Control valve controls the engines idle speed. 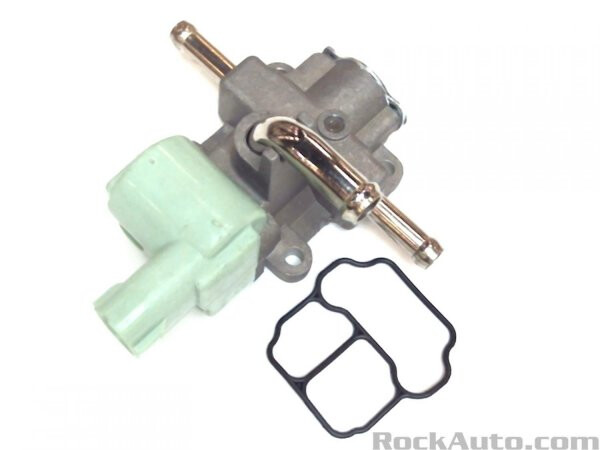 There may be a problem with the IAC valve.

I got the code from my AutoZone and looked it up and it was for the exhaust one sensor. I

Suggest to post the code number here. I presume that’s a code for an o2 sensor. The o2 sensor is how the computer sets the correct fuel to air mixture. If the mixture gets out of whack, that will indeed cause drivability symptoms, especially if it gets way out of normal limits. In most cases o2 sensor codes don’t cause severe drivability problem like you are experiencing though.

I checked my oil and noticed that it was beneath the low oil mark. I put oil in it to see if that would make a difference; it made a big difference in power. This apart of why the car was struggling but it didn’t fix the rpms.

Exhaust: a earlier poster mentioned that they think it’s the catalytic converter that’s clogged. I doubt it is because some guys cut it half way off trying to steak it so I road with it halfway cut for awhile I got clamps on it and it so I’m confident that’s that’s not what’s causing this. But I can easily check by taking off the clamps. I’ll do that later

AIC valve: I thought about that too. I’m going to get some cleaner for it to see if that changes anything. I also just cleaned the intake just food for thought in case anyone is thinking that

My question is why don’t you guys think it’s the transmission or the fuel system?

My question is why don’t you guys think it’s the transmission or the fuel system?

Can only speak for myself, but the engine rpm dropping faster than normal, while vehicle speeds remains normal, when you take your foot off the accelerator isn’t a typical symptom reported here for a failing transmission or fuel system. Could be one of those, but more diagnosis would be required to make that determination. If wanting a wild guess, the idle air control gadget seems more likely. I’ve had weird engine rpm symptoms when that gets out of whack on my Corolla. I did however have a low speed engine rpm instability problem in neighborhood driving one time, cured by cleaning fuel injectors and adjusting the throttle position sensor.

I do think its the transmission