What's up with all the semi trailers catching on fire (Oct 2022)?

Between Illinois and Texas there have been 4 on fire! I saw two of them. One was burt out in the back end and burned through on top. The other one was being sprayed with water by a fire truck through the back door. It was grey smoke and the trailer looked to be full of boxes.

The trailers were detached. I wonder if it would help to continue driving to a fire hydrant? I know they must care about their truck and not the trailer though!

Is there some defective lithium battery cargo being shipped around recently?

If the back of the trailer (over the trailer tires) is burned or the front of the trailer (above the tractor tires) is burned, it’s overheated brakes most likely. Usually a mechanical problem that the driver doesn’t notice until they’re smoking. If it’s the whole tractor it may be related to the re-gen process in the emissions system. Google it if you’re unfamiliar. The one I was driving burned back in April. It was doing a re-gen while I was driving and something evidently got hot enough that something ignited. Didn’t take long and it was engulfed in flames. Turns out there’s very little metal between the engine and interior in a Volvo. 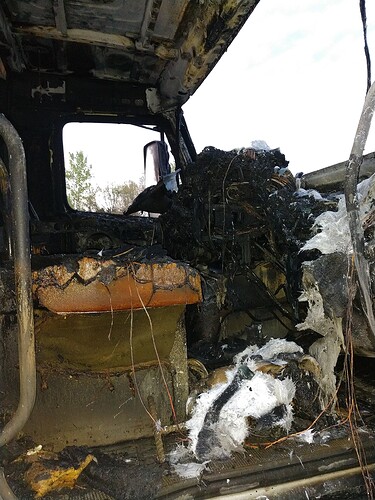 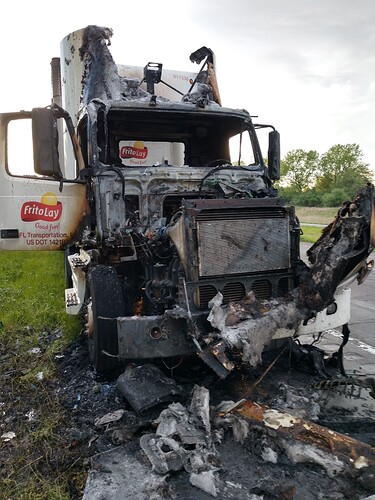 Wow! Glad you are OK!

I wonder if it would help to continue driving to a fire hydrant?

Where do you get these ridiculous ideas ? There are no fire hydrants on limited access highways . The ones in cities do not have hoses on them . A rolling fire will cause even more fires .

The only thing you seem to really understand is how to annoy people.

I guess I (or Frito lay) was lucky. The volunteer fire department showed up just a few minutes after I called 911. They got the fire under control quickly enough that no damage was done to the trailer.
Worst part was it took about 4 hours to get a wrecker on scene to move it. Spent most of that time sitting in a state trooper’s car talking.

I would say that it’s not that big of a problem. Four fires between Illinois and Texas vs the number of semis in total plus miles driven between IL and TX comes across as miniscule; much like airline crashes.

Different subject but I wonder more about all of the food plant fires.

Must be something new but I have never heard of the regenerative system in trucks. Is that like a revised jake brake or something?

The Regen is for the emission system, cleans the DPF (Diesel Particulate Filter) with heat.

I drove a rented 16 foot truck filled w/household stuff from Denver to San Francisco. In mid-summer it gets pretty hot on I80 across the northern Nevada desert. The enclosed part where the stuff was carried got super-hot, over 120 degrees I’d guess, the roof was too hot to touch. I could see how certain volatile liquids, alcohols, oils, etc might self-combust in that sort of environment.

We did not have regen when I was driving. Most common cause of tractor trailer fires in my day was driving on flat tires.

Flat tires are easy to spot on a pre -trip inspection, but difficult to tell if one goes flat when driving.

If you pass another rig or he passes youm he can generally hear the sound of the flat and let you know on the cb. I generally only turned mine on in bad weather. I usually listened to the am/fm. and all the n
onsense on the cb irritated me.

I was heading west from Utica NY on the Thruway with 2 45 ft trailers and I got passed by a goy pulling a single 45’ trailer/ I could hear he had more than on flat tire so I turned on my radio and told him. He ignored me but other drivers said they had been telling him for an hour and he said it was not his trailer and he was not stopping until he got to buffalo and got rid of that trailer.

The Thruway was down to one lane between exit 46 and 45 and they were making everyone exit at 45 to take the 490 around to get back on the Thruway at exit 47.

It was shut down because when this guy with the flat tires slowed down because of the backup in the single lane his overheated tire burst into flame and started the load of chocolate on fire which burnt up the whole load and burnt the trailer in half.

This reated a problem for me. Two 45’ trailers are not allowed on the 490, I could not break them up and transport them across for several reasons. I had no mud flaps for the4 dolly ( the set of wheels between the two trailers ) I did not have enough driving hours to complete the trip either. It was Friday evening and I caller the Buffalo terminal to have them send two city drivers out, one with a set of flaps. The dispatcher was heading home herself and told me the city drivers were all gone home and I would have to work Saturday to go get the rest of the equipment. THe terminal was locked up until Monday am and they needed that second trailer by 6 am.

I knew I could not get mud flaps because the building was locked and the only key I had was for the gate.

I decided since I could not legaly shuttle the dolly across, there was no sense going through all that work so I took my 117’ long rig down the 490 through downtown Rochester and out to exit 47. When I got to the toll booth, the collector asked me, I did not see what I thought I saw did I? I said no, you could not have seen that because it would have been Illegal. He said, I thought not and let me on.

Monday the terminal manager asked me what happened. I told him he did not really want to know, just pay me for the few extra miles I put in for.