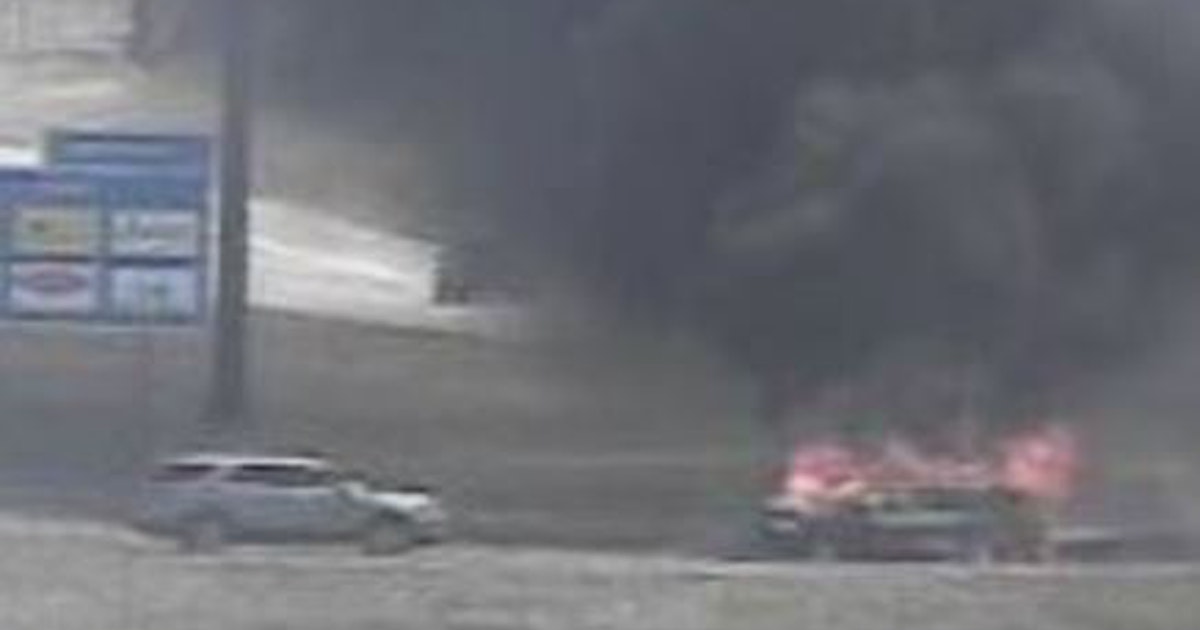 A piece of a flat tire ignited gasoline as van traveled.

Get broken stuff repaired soonest is a good takeaway.

But I have difficulty believing that a flat tire got hot enough to ignite gasoline. I think it more likely that the tire ruptured the filler tube and then gas vapors contacted the hot exhaust.

Either way, her choice to put off the repair apparently got her killed. A good argument for preventative maintenance.

I still dont understand why when you see a plume of black smoke coming from your car that you dont pull over and run. yes i drive thru that area occasionally. there is an exit cloverleaf close by that i noticed a car sitting in pond at cloverleaf center. 3pm on sunny warm day and car is in pond. i guess it is hard sometimes to turn right properly. seeing smoke and making connection? driving straight or turning is hard also?

I have seen many truck tires burst into flames when driven flat I have seen tire fires on a trailer burn an aluminum trailer in half.

Modern cars have tire pressure monitoring systems and there is a good reason for this. I heard that truck drivers carry a rubber mallet and thump the tires on their rigs at rest stops. A trained ear can tell by the sound of the thump if s tire is low.

Driving on a flat or near flat generates a lot of heat and once that tire starts burning, it is a very hot fire that will spread. People drive on flat tires because that can’t or don’t know how to change a tire and can’t or won’t call for tow truck to change it. Or I suppose sometimes are unaware that the tire is flat.

Once the flat tire starts to come apart, the rubber does damage to the fuel filler, the steel belts in the tire spray sparks and Woof, the van bursts into flames.

As tragic as this is, I don’t have much sympathy for that woman. If she thinks it’s fine to drive on a flat tire after being advised of the problem then in all honesty, she shouldn’t even have a drivers license.

Her family doesn’t understand how it caught fire suddenly? Apparently none of them have heard of spontaneous combustioh; something that can happen in many ways with an automobile.
I hope the next story is not one about the family suing the auto repair facility.

Someone at a local business here has been driving a PT Cruiser on the T-type spare for the past month. A quick look will easily show that tire only has about 6 or 7 PSI of air in it. The edge of the wheel rim is almost touching the pavement. They motor on anyway.
Last time I was by there i walked over to take another look and the entire surface of the tire is nothing but bare belt showing.

That was part of my education when I worked at a Citgo service area on the NJ Turnpike, back in the late '60s. The long-haul truckers would thump their tires with a wooden club in order to determine if the tires were adequately inflated after a long drive.

I do that to my trailer tires before going for a drive except I kick them instead of thumping them. I can tell if one is low.

Someone was convicted of arson for driving on ‘metal tire’ (=rim) in a national forest. There’s a law against driving on metal tires.

Gotta watch where you park, too. I remember in the late 1970s visiting friends in Northern Cali. Catalytic converters were new to cars, and there were a lot of warnings on the radio about not parking on dried grass because it might start a fire. We were also told if there was a fire, whoever parked the car on dried tinder would be charged for arson.

I heard that truck drivers carry a rubber mallet and thump the tires on their rigs at rest stops. A trained ear can tell by the sound of the thump if s tire is low.

My dad drove trucks when I was a kid and sometimes would let me ride along. He just bounced a large ball-peen hammer off the tires, if the hammer didn’t bounce, the tire was flat.

some of my colleagues have gotten it into their heads to thump the tires, instead of actually checking the pressures and inflating as needed

I’ve seen them thump the tires and “declare them good”

I’m talking about tires on class 7 and 8 vehicles, not passenger vehicles

I agree that thumping a tire might detect one that is dangerously underinflated . . . but I don’t see it as a true substitute for actually checking tire pressure and correcting, if needed

Shortly after I retired from trucking, 23 years ago, the Federal Dot discontinued the requirement for drivers to show a tire check on their log books every 2 hours.

I think that was a mistake.

I’m all for taking care of your tires but checking 18 tires with a tire gauge every two hours on the road seems a little extreme. Add in time to let the tires cool first and you’ve cut your income in half.

It’s not so much about measuring pressure as it is about detecting flat tires, which are not always visually apparent with dual wheels.
I have noticed a lot of pickup trucks with rear dual wheels with heavily damaged fender skirts from tires disintegrating, with singles, a flat tire is obvious and so this kind of damage is rare on vehicles not equipped with dual wheels.

I also imagine modern 18 wheelers might be equipped with TPMS.

Drivers are not expected to carry a tire gauge, only to check that the tire is not flat. Carrying a billy club to check tires with can get you arrested. My uncle got a ticket for it in the 1960s. He then went and bought a club from a truck stop that was shorter and wrapped with steel at the end with the name tire billy carved into it. Perfectly legal.

Not to go off again but my BIL would never tell what he carried when asked but talked about taking the semi through New York City where guys would try to open up the trailer at a stop light and help themselves. I don’t think they ever got anything though. He was in Kansas and didn’t like loads going east.

It’s not so much about measuring pressure as it is about detecting flat tires, which are not always visually apparent with dual wheels.

But now most new trucks and trailers no longer have dual tires, but instead a single wide tire. Anybody have info on these? Perhaps they have run flat capability?