Whatever happened to the small round blue lens inserted into brake light covers?

As a little boy I was fascinated thathey made the whole brake light appear purple from a distance!
Still don’t understand how the higher frequency blue light makes all the lower frequency red light appear somewhat purple.

IIRC, places like J.C. Whitney sold small “blue dot” lenses that could be inserted into the red lenses after drilling a hole. I always liked the look of brake lights with those blue dot lens additions.

I don’t know for sure, but i imagine that they wouldn’t be legal today.

They are still sold today. You can buy them from Speedway Motors and others.

Back in the day, tail light lenses were glass, not plastic. It made adding blue dots harder than into plastic lenses.

Google it for more history, and sources for new/old blue dots.

For that matter, I think that most people sporting blue dot lenses wouldn’t get pulled-over nowadays.
For several years, I have observed vehicles with outrageously obvious safety issues that seem to cruise the roads with impunity.

Depends on the state, in Washington they are legal as long as the non-commercial vehicle is over 40 years old.
Or any Motorcycle regardless of age.

It’s because the red cones of the eye have some response to far blue (AKA purple).
A mix of red and longer wavelength blue can give the same appearance 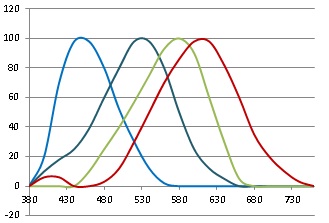 Note the red curve has a little bump between 380 and 430.
The curve peaking at 530 is the response of rods in dim light.

In the paper today someone asked the Highway Patrol about use of collector plates in Minnesota. Seems that there are quite a few restriction such as cannot be used for daily driving like to the store. And must own another car with standard plates, etc. So seems to me I read if you have collector plates that are used only for going to car shows, etc. and have blue dots, they leave you alone. Get caught going to the store though and it’s 90 days and/or $1000. We’re a rough bunch but smile when the citation is written. (All of the State Patrol go through customer service training, or did, so they are always pleasant when issuing a ticket.) One patrolman even told me I could wait a few weeks to pay my $125 fine for going 70 in a 55. Couldn’t wait though-heading to Europe in two days. Heh heh. Guess I got off topic again. Slap.

We have a couple here in town that go on daily coffee runs with a 62 Porsche 356 on collector plates, they do have other cars on standard plates since they only drive the porsche 9-10mo out of the year on average. There have been drivers cited for commuting on collector plates but usually acting on a complaint. I understand that some drivers are using collector plates to get around the excise taxes in the Seattle area.

A guy I drove with at a national freight company with a ton of trucks on the road put a blue light on his CB antenna that lit up when he pressed the mike. Since we had a different rig every trip. this was his way of identifying himself. We drove out of Buffalo NY to points East and spent a lot of time on the NY Thruway. He got a ticket from the State Police for displaying a blue light when he was not a volunteer Fireman or driving an emergency vehicle. He asked the Trooper why he did not ticket all the Canadian rigs that displayed blue lights and the Trooper told him that they could not be given tickets because the lights were legal in Canada.

It is sort of like the steel coil law. If you have a CDL issued in NY State and are going to haul steel coils, You need to take and pass a test on the proper loading of steel coils and get an endorsement on your license, just like the endorsement for doubles and triples, hazardous materials, tankers, passenger buses, and tow trucks.

The problem with the steel coil law is that it is a NY State law and very little steel coil is made in NY anymore, so most of the steel coil that moves through NY is driven by out of state or out of country drivers who are not required or even able to get the endorsement. It is just one example of useless feel good legislation that burdens people without accomplishing anything.

Just saw a 1955 Chevy pick up with collectors plates.
At a red signal I congratulated the owner ohis truck.
He said he drilled the holes and put in the blue dots.
Unfortunately, the nickel-sized blues were more athe 6 o’clock position and not bright enough. Should have been dead center over the incandescent bulb filament.
Would look even better if halogen bulb.

Green signal before I could ask if he installed seat-belts.

I’ve had them on my '37 Chevy but replaced them with full LED lenses so people can actually see them. Driving such a car, particularly on a freeway can be a challenge because others will climb up my tailpipes , buzz around both sides, etc trying to figure out what it is. Two lane roads are much more satisfying anyway.

37/38 are rounded rectangular lights. No Backup lights on those cars.

Our 57 Ford was the first car we had with back up lights and it was an option back then depending on model. Don’t know about 57 Chevy but the 58 Chevy had them on the Impala anyway. Just thinking though, the 58 Biscayne only had one light per side so no room for back up lights. The Bel-Aire had two lights so maybe one was a back-up, but the Impala had three lights with the center light the back-up light. Maybe you couldn’t really order that option but had to get the model that had it as a package.