The bolt it’s dripping from is the oil pan. You can see the oil filter on the right.

Just a guess, but you probably need a new oil pan gasket, at the rate its is leaking, unless the shop you take it to is very close you might consider having it towed.
Note, next time you do a video recording of ANYTHING, hold your phone horizontal.

Nope, it’s not the oil pan gasket. It might be the front main seal, but it might also be whatever it is that is located where that oil stain is. Can’t tell, because I am not familiar with the engine.

Part of the pic disappears after a few seconds but to me it looks like a crank or cam seal leaking from the timing belt housing.

If so, this MUST be fixed PDQ. OIl will be saturating the timing belt and it WILL break at some point leading to engine damage.

Check the oil filter closely. you could have a pin hole from a stone and it is spraying a tiny stream of oil out.
My wife had this happen twice …on one vehicle.

I would just change thew filter out and see if the leak goes away.

I think it looks more like trans fluid. Other than that I have no real suggestions based on that video.

I second the vote for the oil filter, but the oil pressure sensor is usually located right next to the oil filter and they are know to blow a seal near the electrical terminal and oil comes out like that.

Worse case, the oil pump is located right at the front of the crankshaft, the crank goes right through it. If it blows a seal, you will get oil coming out like that, but usually it drips right behind the crankshaft pulleys, not further up like that.

I would replace the oil filter, then if it still leaks, find the oil pressure sending unit and wrap a paper towel or Kleenex around it and see if it get saturated within a few seconds. Or do the Kleenex first, it’s cheaper.

Ive noticed over the years the tendency for oil pressure switches to begin leaking in the spring and this can be worse if extremely cold conditions existed.
It seems to do in the plastic around the crimp and with pressurized oil the tiniest pinhole can make a huge mess.

Looks like the same leak as on my 97 Accord.

I added this to the oil and it stopped the leak 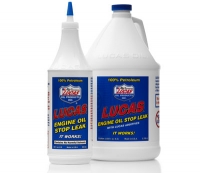 It just needs to last until the next timing belt service.