What happens to my warranty if Saab goes under?

I bought a 2010 Saab 9-3 last September. I got a great deal on the car at the time and I thought when they were bought by new owners they were going to be ok. Now I’ve been reading that the parts are in short supply.

At the moment it doesn’t look good for Saab. If they go out of business who will honor the warranty? Who’s going to make the parts? Should I sell it before they go under?

I’m not sure what to do? I don’t want to be stuck with a new car that I can’t get fixed or have a car that isn’t worth much.

What is more likely to happen is Saab may file Chapter-11 and restructure themselves into a smaller company. Not sure if that means they’ll move out of the US market or not. There will probably still be many parts around for years. The problem may be 5-10 years down the road if Saab pulls out of the US market.

If I were you I’d keep it but real diligent about maintaining it. This will help with premature failures which may cost you money.

If Saab goes under, you have a problem. Some 9-3 parts might be shared with GM cars so you could try a GM dealer for parts, but GM won’t be honoring warranty claims.

There have been questions about SAAB’s future for the last several years, long before you bought the car.

I think SAAB the parent company will be fine and continue on as they have a large truck and aircraft division also. The issue will be if SAAB ceases their automotive presence in the U.S. In a case like that it’s possible that SAAB owners could be left high and dry as to warranty and some dealer only parts.

That’s the extreme scenario and whether that will occur under SAAB’s new management is anybody’s guess. 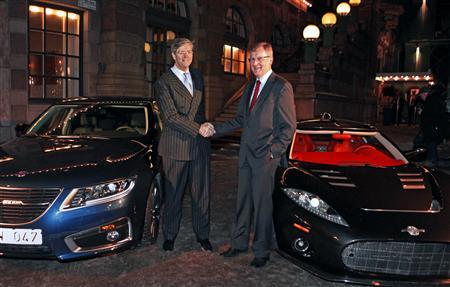 Tiny Dutch auto group Spyker clinched a last-minute deal on Tuesday to buy Sweden's Saab, in an audacious attempt to turn around a money-losing brand that only days ago was headed for oblivion.

No, the SAAB parent company is “Spyker”, a small maker of exotic sports cars. Spyker is also in great financial difficulty, and has no connection any more to the truck or aircraft business. SAAB is inches away from bankruptcy, one I doubt they will survive, given the lack of interest the last time.

I probably did not make it clear but I’m fully aware that SAAB Scania the parent company is not involved with SAAB automobiles and the parent company gave their child up for adoption not too long ago.
GM had owned at least part of SAAB (15%) since the 70s and SAAB even shared manufacturing with Ford and Triumph.

I’m in agreement with you that the outlook would be a bit bleak and generally what happens is that someone loots the bank on the way out the door and leaves a gutted shell behind.

Wasn’t there a special fund (set up by the …) to compensate people who got burned after SAAB went belly up? There has to be someone watching out for SAAB owners, they really need it.

Are they required by law to honor the warranties? I thought they had insurance for this.

The son works for a Goodyear auto service center. He said right now they have three Saab’s sitting in the parking lot because they’re having difficulties locating parts so they can be repaired.

If a company goes bankrupt and no other company buys them with the agreement to continue honoring warranties and supplying parts for the older models, you are out of luck when it comes to warranties. They die with the company…

What usually happens, a shadow company buys up all the old Saab parts from the dealers for pennies on the dollar and these parts become available online to whoever wants them, available through various Saab owners clubs and associations. But the book value of the cars collapses as nobody wants an orphan…You can try calling it a “rare collector car” or “Classic” but that won’t help much…You can also count on ignorance to provide you with a buyer who is not aware of Saab’s status…

This happened with Fiat back in the 80s. A multi-dealer I worked for took on a Fiat franchise in spite of many protests from every mechanic in the shop.
A few weeks later the screwing started when the first 2 truckloads of “new” Fiats arrived at the dealership. At the time the next model year VWs, Subarus, etc. were just hitting the lots and those “new” Fiats we got were TWO model years old.

We could not even obtain an oil or air filter from the distributor (based in Houston) and every warranty claim was routinely rejected. We had to bring in 2 of those “new” Fiats and cannibalize them for parts, leaving both gutted shells.

Eventually the returned warranty claim pile reached a pretty high level and a phone call to Fiat corporate at the distributor led to a disconnected phone number. They were gone that quick and everyone from car owners to dealers were left holding the bag.
This definitely left a bad taste in my mouth in regards to Fiat and is likely one of the reasons why this dealer went under a year or so later.

Different corperations - different rules.
IF they go under it will all depend an their individual fine print, one company at a time.

I’ll let you guess, can I still get warranty work done on this amp ?
Even though you can still buy amps with the Accoustic name on them, the company has been bought and sold two times since, so consequently…

I really thought after spyker bought Saab they were going to put money into it. Before I bought car I looked into things and I read how spyker was going to bring back a hatchback and a couple of new cars. Everything I read looked good. Live and learn the hard way.

Spyker has good intentions, but it’s difficult for a small company to takeover such a large operation and make it work. Since Saab is in Sweden, there is a possibility that the government might take it over for a while. Don’t count on it, but if Spyker can’t find partners to finance Saab, it will likely go under. The Peoples Republic of China is rumored to be investigating a stake in Saab, but what company in trouble isn’t linked to China?

Filing for bankruptcy and going under are two different things. Saab may file bankruptcy and reorganize itself into a smaller viable company. Or it just may go under. The other option is if Saab goes into bankruptcy foreclosure someone may then buy them for pennies on the dollar…thus saving the company. This isn’t done too often…but it does happen.