I recently acquired my great-great uncle’s 1926 Chevrolet 1-ton truck and I am planning on restoring it over the next couple of years. At some point the rear frame crossmember was used as a makeshift tow bar and was bent. About 15 years ago my grandfather had a new crossmember made by a local shop and bolted it in place of the original, however, the side rails are cracked between a few of the bolt holes and the open side of the c-channel. The frame is still straight and I know the truck was used for many years after this happened however, I would like to repair the damage before re painting the chassis and continuing with the restoration. My concern is if I simply weld up these cracks will I end up creating more issues? If I was to weld it should I heat treat the weld to prevent future cracking? Anyone know what type of steel Chevy used for frames at this time?

I’d find a restoration shop to do this work, just because the frame is so important. Shouldn’t be anything too unusual, but they’d know what to look for and how to fix it.

I would not recommend welding this yourself unless your are a very experienced DIY welder, or a pro. I don’t think you need a specialize restoration shop, because the materials used in 1926 were basic steels, nothing exotic. I’d removed the bolt on fix and have a good professional welder make a proper repair.

Now, if your intention is to show this truck and have it judged at high level historic car events - then I’d go for a top notch restoration shop for the repair. It seems this truck could be pretty unique and rare. I’d do some research on what this truck might be worth then decide what is the appropriate repair/restoration strategy. You might just have a rare gem on your hands.

Look something like this? Note - if it has those wooden wheels, be VERY sure they are in excellent shape. If they break (wood does that), it can be unexpected and (given the 100% lack of any safety devices) very dangerous. 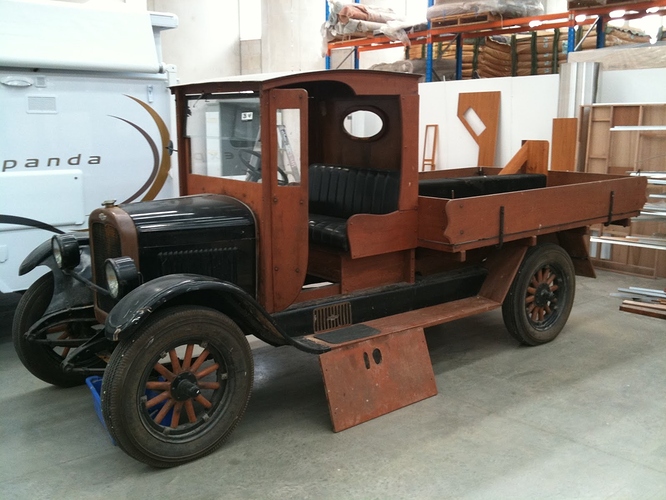 You need to drill a hole at each end of any crack where it ends in metal (versus an existing hole). This relieves the stress riser and stops it from growing any further. Then weld up the crack, grind it down and paint/finish. No worries…

There’s nothing special about the steel used in the frame.

What I would do is plug weld the holes.

Then I would take a sharp grinding burr and grind grooves along the cracks. That way when you weld the cracks you’ll get 100% weld penetration. And when you grind the welds smooth you’ll still have good strong weld joints.

Then I would weld the cross member to the frame.

Thanks for the advice, that’s along the lines of what I expected. I have done a little stick welding and plan on getting a oxy-acetylene torch and experimenting with gas welding but I am no means an experienced pro and was planning on having a much better welder than myself do the work.

The truck is fairly rare though I doubt it would be worth more than $20-30k even with a show quality restoration. It is not numbers matching, the block casting indicates it was out of a 1928 model. It does however have the original oak spokes which are in very good shape, my uncle oiled them regularly with linseed oil though I’m sure they’re overdue. The interesting thing about this truck is that it has the factory Fisher Body cab, my grandfather had someone replace some of the wood cab framing that had rotted out, luckily he did a very nice job. The other interesting part is that was around the time ford was retooling from the model t to the model a, and Chevy capitalized on Ford’s lessened production capability by pushing their production as hard as they could. As a result, there was not really a clear distinction between the 1926 and 1927 Chevy truck models (not sure about the cars), the later 1926 models (which is what I have) were fitted with some parts intended for the 1927 models. My truck had 1927 fenders as well as some other parts from the factory.

Instead of an oxy-acetylene outfit, get a MIG welder that uses argon/Co2 gas.

Agree with Tester. Don’t use gas. Heats up too much and distorts, takes too long.

True, but it’s hard to cut, forge, heat, anneal and harden with a mig, and who doesn’t love fire?

I’d suggest having the frame TIG welded by a pro. Best possible way to control heat and material flow. The frame should be laid out on a bedplate or frame table and actually checked for straight and square as I doubt it is even if you say so. Many weren’t all that straight from the factory and this one has been through a lot per your description. If you don’t intend a concours restoration, a little extra reinforcing might be in order as well given its age. Safety first!

I thought the question was about welding?

Since you will probably never use the truck to carry heavy loads like it was originally designed for, having some welding on the frame will not be unsafe. MIG is a good idea. Stick welding would be my second choice. Gas, a DISTANT third.

My first vehicle (not first car) was a '31 Chevy truck that was given to me as payment for tearing down the old shed that the truck was holding up. It was last tagged three years before I was born. I was 13, and arrived on site on my bike with a 4 ft wrecking bar, claw hammer, and a hand saw. I stacked the wood for later burning. It took me a few days, but the pay was good. OSHA, what’s an OSHA?

My dad made it run with a used battery and a fuel pump rebuild kit from Western Auto. We found a NOS (that’s New Old Stock, not Nitrous Oxide) fuel pump at a Chevy dealer some time later.

Does this truck have a six cylinder engine?A friend of mine had an Old Chevy He made into a tractor of sorts,it was a four cylinder and when you shut the throttle,it had the most interesting backfires(sort of musical)fix this old truck by all means,but if you are not doing a complete restoration,go ahead and make some reversible upgrades and the Guys are right,get this frame fixed by a pro(you would use a good surgeon on your back wouldnt you?)

Unless this is going to be “shown”, you might consider gusset plates in addition to the above suggestions. These frames weren’t exactly overdesigned to begin with, and welding leaves the “heat affected zones” that may not be equal to the original strength. Basically, the welding changes the grain structure of the area around the weld. Some extra beef would go a long way toward preventing future problems.

You can also if you wish buy replacement rails and/or frames for these oldies. Aesthetically they’ll be the same as the original but structurally they’re far more robust.

I definitely like the look of those many-spoked wheels. Looks terrific! Much more interesting than the wheels of most modern cars.

I can’t speak to the welding issue, but there’s a couple of magazines, monthly publications, which cover this subject. One is called “Vintage Trucks”, and the other is called “Classic Trucks”. My local Barns and Noble bookstore carries both. Especially if you can find a supply of back-issues, there will probably be several how-to articles that will be of help. Another option, make a good photographic record of your restoration process, and maybe your truck will be featured in one of these magazines. Sounds like a fun project. Best of luck.

My opinion is that you should have a pro welder do this. As per the same mountainbike’s suggestion, gusset plates are a highly recommended idea.

I might point out an example of not using gusset plates. A car dealer I worked for took in trade a very slick, new paint Pontiac Grand Prix. The car sold quickly but a week later came back with a complaint of wandering on the road. “Wandering” was the understatement of the century.

I pulled out of the lot for a test drive and my heart was in my throat inside of a block with knuckles on both hands turning white from wrestling that pig.
Nursing it back to the shop and putting it on the rack I discovered the car had been hit hard enough to crack the frame clean into around the right front wheel.

Someone had winched the crack back together and butt welded it before trading it in. The new owner hit a bump just right and the butt weld completely separated; leaving a gap about an inch wide and which varied in width as the car moved. At least some gussets would have likely prevented that from happening.

The problem restoring these old Chevy’s is not the steel parts, it’s the wood parts…The sheet metal parts are all nailed and screwed to a wooden framework…Unless you are a cabinet-maker things can get very difficult and expensive…

Here are a few “outside the box” suggestions. Have another crossmember fabricated with thicker channel steel if possible. The crossmember’s main job is to space the frame rails to where they should be but must also provide torsional resistance to distortion when one side goes over a bump or an uneven surface which is possibly why the part cracked at the bolt holes. Can you add extra bolts and can you periodically inspect the crossmember and frame areas near the bolt or rivet holes until it appears that they will be ok? Consider welding the crossmember to the frame rails instead of bolting or riveting.

I’ll echo the comments of others here…“You need a pro.”