I asked a shop to replace my brake fluid when I brought my 1994 Celica in for alignment. Upon picking it up they said that they could not do the brake fluid flush because they didn’t want to risk breaking the bleeder screws, which would have required me to get new calipers and drums. It’s the second shop that has told me the bleeder screws were stuck. I understand it’s pretty normal, particularly here in Michigan.

So, what if I bleed all of the fluid through the one working bleeder screw? It would be the right front. Does that help at all? I suspect the old fluid in the other lines would stay put and never mix with the fresh fluid.

I have no problems with the brakes’ operation and am inclined to leave it alone if the above technique is only a marginal improvement. I just wanted to change it because it’s pretty brown and is possibly original.

This car has 214,000 miles and I want to drive it until body rust makes it unsafe. That’s probably 2-3 years from now. It started rusting only a few years ago after going from FL to MI.

If you only have one screw, forget it and just do the turkey baster thing from the master cylinder. Do it again in another three weeks and say OK until next year. New calipers cost over a hundred bucks for most non-domestics. It isn’t great to do that but it might be better than nothing.

I don’t think bleeding through one bleeder is going to accomplish much at all. Brake fluid is hygroscopic; meaning that it absorbs moisture.
This can be a bit of a safety issue. Aged brake fluid will boil at a much lower temperature and can also lead to things like brake fade. In some rare cases aged fluid can even cause a brake caliper to lock up.

You could try soaking the bleeders with some PB Blaster and allow it to sit overnight. Next day use a brake bleeder wrench or boxed end at the least and try to see-saw the wrench. In other words, do not simply try to force the bleeder loose. Work it slightly back and forth and if it pops free then continue to see-saw it until it’s loose.

What can happen also with aged bleeders is that you may loosen them and no fluid will come out of them. Corrosion due to moisture will clog up the bleeders and in a case like this new bleeders will be needed.

At RockAuto.com, calipers are less than $50 each, and rear wheel cylinders are less than $10 each. You will obviously pay a shop considerably more for the parts, and also pay for a few hours of labor, but you might want to consider just having the parts replaced.

I would have to agree with the others… you could suck out whats in the master cylinder…but be careful not to swallow the fluid…it tastes bad and is rather poisonous. The other important portion of changing the fluid is getting it out of the calipers as well, in order to keep their internals free of moisture and keep the seals happy as well.

You’re kind of as stuck as your bleeders. You can try to get your bleeders out carefully but be aware that you may need to buy new or rebuilt calipers in order to get you out of this mess. If you do buy new units…try to keep the new bleeders greased and capped so they have a better chance at surviving your harsh environment.

As a lesson for those folks who don’t do this very often: What tricks have you pros used to get the bleeder screws loose?

I’ve used repeated application of a rust penetrant, such a PB Blaster - along with some tapping on the screw head itself. I also use a 6 sided socket, so I can gradually add pressure.

I’d just bite the bullet and replace the calipers and wheel cylinders. Brakes are just too important.

Loosen the banjo bolt fitting and that will let you bleed lines at least.

Yes, and if you unscrew them you can siphon out much of what’s in the caliper body, then fill to overflowing with new. You’ll need new washers where the hose connects to the caliper.

Yes, and if you unscrew them you can siphon out much of what’s in the caliper body, then fill to overflowing with new.

I think there’s a good chance of getting air in the system doing that. The banjo may not be in the right location to get air out.

Good point. Might have to remove the caliper and move it into a favorable position. Then you could let gravity remove the old fluid. I have time and curiosity for that kind of thing, but a pro might not want to do something irregular. 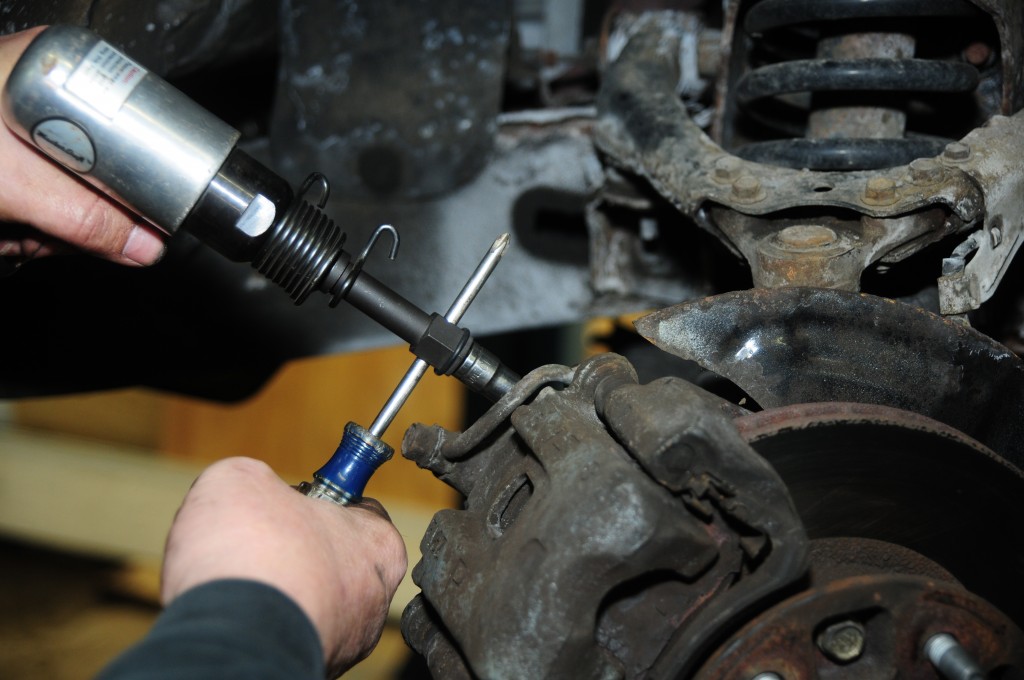 This article will show you how to remove a rusted bleeder screw simply. Read to learn more.

I certainly don’t have any techniques or tools that a professional shop wouldn’t have already tried but that Phoenix Systems thing is interesting.

Interesting also to consider bleeding through the banjo bolts but there must be a good reason the shop doesn’t do it that way as an alternate method. Maybe if you had a big bucket of brake fluid that you could submerge the wheel into you could prevent air from getting into the lines? But then you’d have brake fluid all over the brake surfaces.

The right front caliper is six months old. The rear drums are 2-3 years old. I don’t think their mechanical integrity is in question. It’s just sad that the bleeder screws are such a weak link in the system. How much more would it really cost to make them out of a corrosion resistant material?

I don’t have the papers accessible right now but I’m pretty sure all rear brake hardware was replaced (with Auto Value parts - barf). That’s what they seem to do here when any brake job is needed - just replace all the parts, not just the worn ones, with local store cheapo stuff. I’m an OEM parts fan but OEM quality is overkill for a car of this value. My OCD usually prevails though.

Why isn’t drilling out the bleeder screws and re tapping the threads an option? Difficult access? Risk of foreign material in the system?

I would vote for the turkey baster. I have successfully removed wheel cylinder bleeder screws by removing the wheel cylinder from the car and taking all the rubber parts out before applying heat. The trouble with doing this is the the brake line attatchment to the wheel cylinder is also rusted and you break the metal line.

If you don’t have welding rod, I have always used rivets in bleeders to help prevent collapsing during removal.

Why isn’t drilling out the bleeder screws and re tapping the threads an option? Difficult access? Risk of foreign material in the system?

They have to seat correctly, and you’d need to find an oversized bleeder to fit.

I’m surprised that two year old wheel cylinders have bleeders that rusted so badly. Those cylinders could be a lot older.

If these are so “new”, the system was supposedly flushed no more than 2-3 yars ago for the back and 6 months ago for the front.

We regularly see posters on this forum, who go for 10+ years with no brake fluid flush and debate if it is too early to do that at 50K miles, 100K miles, etc…

myself, I’m on 3 years / 30K miles regimen and I’ve seen no bad effects up to 3-4 years in service, so I’m more on the caution side of it

I think this car is likely not in urgent need for the brake system flush, turkey blaster thing would probably suffice, just to give some warm&fuzzy to the owner