I’m having difficulty bleeding brakes on a 2020 Honda civic EX. I can’t seem to match the bleed screw up to a size. I have the original bleed screws. It seems to be somewhere between a 10 mm and a 11 mm. I have tried several 10 mm box and open end wrenches.

All of which seemed to be to small and I couldn’t get the wrench to fully sit down on the bleeder screw wrench flats. I don’t want to round it out so I stopped. I did have some difficulty getting around the caliper (I didn’t want to disassemble it) and tried a Performance Tool 10 mm bleeder wrench box end that has an offset to get around the caliper, but that also seemed to be to small.

I’ve also tried several 11 mm wrenches and they are way to big. I have also tried 3/8 inch and that didn’t work either.

I can’t find a video on YouTube of someone doing this on the exact car, but have seen like 2016 version and people seem to say its a 10 mm.

At this point I seem to be stuck. It seems like I need a 10.5 mm wrench to slightly unfasten the OEM bleeder screw on this car to do a brake flush. At first I thought it was cheap harbor freight tools with greater tolerances resulting in my issue, but after several 10 mm wrenches it seems to be something in-between a 10 mm and a 11 mm.

Thanks for any help here on this.

You bought 5 wrenches when all you had to do was use a small adjustable crescent wench ?

Me thinks you should just have your vehicle worked on as everthing you do is an ordeal . 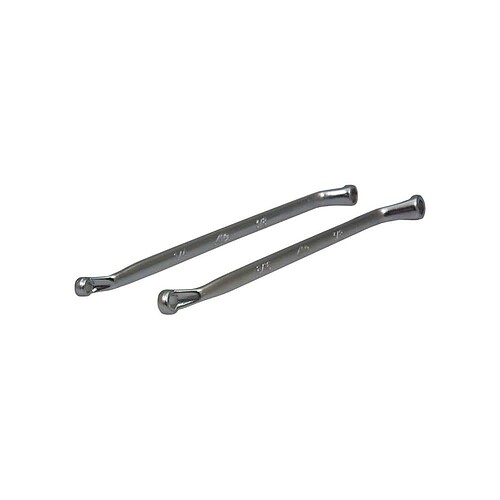 The Brake Bleeder Wrench has a standard size of 5/16 in. x 3/8 in. This wrench is used for bleeding air from brake cylinders with bleeder screws. This double-ended tool is offset for smooth access. Constructed

The brake caliper has some curvature to it and the adjustable wrench has zero offset, so I’m not sure I would get a good grip on it. But like you said maybe an adjustable one would work. Also I already had the wrenches lol.

It’s really odd that it seems to be a weird size.

I guess like you said I can try a really small adjustable wrench so that curvature of the wrench won’t get in the way. Maybe a 13/32 wrench would also be an option.

Those nipples can be quite stuck. I wouldn’t trust an open end wrench. It will round off the hex. Can you get a big sturdy Vice Grips on it? Have you used PB Blaster?

2020 brakes are corroded enough to round off hex? Well, OP says so. I’d use dial caliper and measure hex

Does anyone else wonder why someone would be bleeding brakes on a vehicle that should still be in the warranty period ?

Yep. Why are you doing this, @YoshiMoshi3 ?

The plant manager at one of the places I worked finally put his foot down and would not allow any of the mechanics to use adjustable wrenches. A 10 mm has always worked on my gms though. Isn’t there a whacky English standard that was used sometimes and not metric. I seem to remember special wrenches needed for a Morris.

Oh yeah, I neglected to read the heading. Just take it to the shop.

The size should be 10 mm, sometimes I use a 6-point socket to loosen the bleeder screw, then use a wrench for the bleeding procedure. An adjustable wrench might round the corners on the bleeder. Did you try a different bleeder screw on the vehicle? Perhaps someone marred that bleeder screw with a locking jaw pilers.

Some people believe in following the maintenance schedule, the Honda maintenance guide states to change the brake fluid every 36 months. Vehicles manufactured from September to December 2019 are 3 years old and may have an expired warranty depending on the date of first use.

Is something special needed to bleed the brakes on this 2020 ABS-equipped car? I’d have a shop do it.

Are you thinking Whitworth?

Yeah that’s it. Why the Japanese would use it though, who knows. Maybe parts bound for Europe.

I don’t see any conversion though for 10 1/2 mm though for anything. Based on past issues, I’d say the problem presented is a red herring and unsolvable for us.

I recently replaced the front wheel cylinders on my truck. Old ones had 3/8 inch bleeder valves. New ones have 10 mm. I expect yours use the SAE version.

Note: I bled my truck’s brakes using the gravity bleed method per a suggestion here, and found it is very easy to do and works well. It’s a trade-off between how long it takes to complete the job and the ease of doing it. I used the extra bleeding time to do other stuff is all.

I did have some difficulty getting around the caliper

I bent one of my wrenches (on purpose, using a vise) to solve an interference problem for the wheel-cylinder/brake-hose attachment fitting. If you are looking for an excuse to buy more tools, I’ve been using flare-fitting wrenches for brake work, seems to makes the job a little easier.

I’ll take a caliper and see what it is at some point, hopefully tomorrow. I did get the 7 maintenance code indicating to change the brake fluid. When I use a 10 mm box end, it goes down slightly of the wrench flats (the top part) but does not fully go over it like it’s to small, not allowing me to rotate it. I do believe it’s the original bleeder screw. I also tried several 10 mm socket wrenches just to see if I can rotate it and it’s the same issue. Even a 10 mm deep socket wrench can’t fully go over the wrench flats to rotate it. Once I measure it, we will see if a 13/32 inch wrench might work, they are rarer and appear to not be used to much anymore.

Whitworth hasn’t been used for decades.

I am older than triedac, I still have some Whitworth tools. For some reason the sizes persisted in license plate brackets and some side light nuts for years.

I am confident that Honda is using metric sized fasteners and plugs.