A month ago the check engine light lit up. Took to Auto Zone and code read Valve spool gasket was leaking. Replaced that after which the battery sensor showed low voltage. Hubby checked voltage to see if alternator or battery. Alternator was replaced and no problems with voltage until we decided ygetto get
a print out of the codes. Showed 5 or 6 ABS low voltage and other items related to ABS . Auto Zone did the print out and told us to take it to a business which had higher tech reader to see what problem was. Have appt for 17th. My question is, my rotor
, calipers, and brakes are newly replaced—3 months ago. I have excellent brakes and at no time has the ABS indicator lit up. Is it common for ABS issues if the indicator doesn’t light up to be included with the check engine readout ?? A local mechanic told us that the ABS readings could be benched from a prior issue. Any thoughts??We have had this vehicle for 14 months. Will get the readings as soon as I can.

I want to know what code reader will read a leaking gasket.

Some more specifics would help. Year, mileage, etc. Maintenance history, if available. I assume you mean a spool valve was replaced. Front or back? PvtPublic is correct that a leaking gasket would not really trigger a fault code.

2017, Model EXL, 123,000 miles. Oil changed every 5k miles, I guess I forgot about this thread since gasket was replaced, but same code came up so replaced front valve spool with new gasket as the solenoid was bad 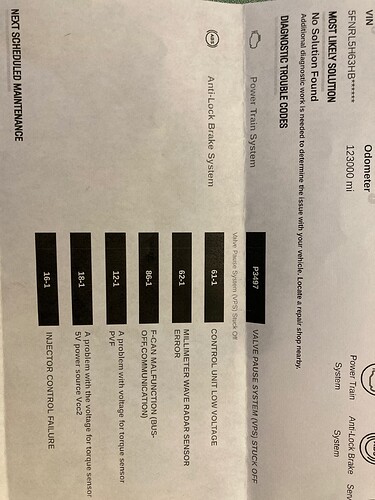 It is common to see low battery voltage faults stored in the ABS computer. Since the alternator has been replace and the battery recharged, erase the faults and drive on.

As far as maintenance. After we bought we had Honda change timing belt, water pump and inspected all components Feb 2022. Bought Nov 28, 2021.

It is common to see low battery voltage faults stored in the ABS computer. Since the alternator has been replace and the battery recharged, erase the faults and drive on.

We took to AutoZone who advised that legally they can’t clear codes due to lawsuits. So have a relative with a reader—which is how we figured out the parts needed—same code showed on AZ. So thanks!! Will clear and keep on driving.