TPMS - how do they work

My wife drives a Hyundai Tucson. A few months ago we replaced all four tires. After about 7K or so I rotated the tires. A few hundred miles later the TPMS light came on. Nothing wrong with tire pressure. I pulled the code and it told me that the front right sensor failed. No, problem, we will take care of it shortly and have the sensor replaced.

However, it made me wonder. I believe this car has the sensors inside the rim. I know the basics of the workings, but I can’t figure out how the computer knows which tire/wheel/sensor is having the problem. Had the battery died prior to me rotating the wheels, it would have been the rear right wheel. Now the tire is on the front and the computer set the correct code. Is it all magic?

Nope, it is ALL science!

TPMS sensors measure pressure. Each sensor has a radio transmitter that sends pressure data to the car. Each sensor has a unique ID code. There is a learning procedure for the car to know which sensor is where. If you don’t teach the car, it does not know which sensor is where. That RF sensor failure means ONE of the sensors is bad but not necessarily the RF since you moved it and did not teach the car the new location.

It really doesn’t matter. Why? The sensor has likely gone bad because the battery went dead. If ONE went dead, pretty darn likely the other 3 will soon follow. If the car is 7 to 12 years old, change 'em all. If its 1-3 years year old, change one. The tire store has a tool that can determine which radio is dead. The new sensor will have its own unique ID code. the tire store has a tool to ink it to the car in the right location… until you rotate the tires again. Your manual likely tells you how to teach the new sensors the new location.

I understand that part, but it does not explain how the computer knows where on the car the tire is mounted. The code I retrieved was very specific that it was the FRONT right tire.

That’s great, but that tire was on the rear a few hundred miles earlier. If the battery had died then, would the computer have said that the REAR tire sensor was the issue? If the sensor ID is coded to the physical location that would mean it has be be re-programmed with every tire rotation. That could be an expensive tire rotation.

I suppose, with your explanation, the only way to find the problem sensor is with a specialized TPMS reader… or whatever this thingy is called.

Read what I posted again. EACH sensor has its very own ID code. That sensor transmits the pressure and the ID. If the car says the RF sensor is bad, it is the sensor it THINKS is the RF. You program the car for the location of each sensor. If you didn’t, then it isn’t the RF that is bad, it is one of the others. But the car thinks it is the RF because that is the location it was the last time it was programmed.

Look in your owners manual to see how to reprogram the sensor to define the correct location after a rotation. If it is anything like GM, no tools are required, just the procedure. Ford requires a tool. I don’t know about Hyundai. If it isn’t in the manual, I’ll bet you can find the procedure on YouTube.

Most late model vehicles have receivers in the wheel wells to identify the sensor location. The early systems required location training after a tire rotation, there may be systems like that today but I haven’t worked on one.

The OP stated he drives a Hyundai, there is no position relearn procedure. The car knows which sensor is where after you drive it after a rotation.

If you have a tire image you have direct TPMS which has a sensor in the valve stem. Indirect has a vehicle icon and tells you which tire is low and it measures wheel speed. Those are the two I know of. What fun.

Had the sensor replaced today. You are correct. The sensors are ID’d and programmed into the computer. Although the car thought the bad sensor was on the RF it was actually on the RR… because I rotated wheels a few months earlier.

Although the car thought the bad sensor was on the RF it was actually on the RR… because I rotated wheels a few months earlier.

Was this the first tire rotation for this vehicle?

On Buicks after rotating you enter into the tpms mode by a few button pushes on the dash. Then you remove air from the tire that corresponds with blinker light that’s illuminated until the horn beeps. Then you go to the next tire with blinker illuminated till done. Adjust air pressures to normal and you’re done.

Don’t know what other makes did, but up until about 15 years ago, BMWs compared the four wheel speed sensors and interpreted a different speed as low pressure. No learning, no expensive sensors to replace. It was not a very sensitive system, but it was adequate, reliable, and cheap.

It was not a very sensitive system, but it was adequate, reliable, and cheap.

I wouldn’t say this is adequate. I just helped a friend this morning with a long-term rental car whose tires were all at 27 PSI when they should have been at 33 PSI. The old system you mention would never have caught this.

On Buicks after rotating you enter into the tpms mode by a few button pushes on the dash. Then you remove air from the tire that corresponds with blinker light that’s illuminated until the horn beeps.

This is what I use at the shop. 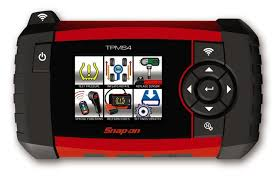 Actually, it’s my own personal tool

This is the shop tool 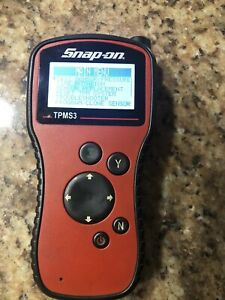 Because of my aging eyes, it’s not easy for me to read the screen on the 2nd one. Not to mention mine’s color, whereas the other is b/w

Another layman’s way is a TPMS relearn tool. You can order through Amazon or Walmart for under $20. I just ordered one for my Buick because on my model it says that a tool is required and there is no manual way to relearn.