To my eye, it looks MUCH better, and it appears that its performance has been enhanced. 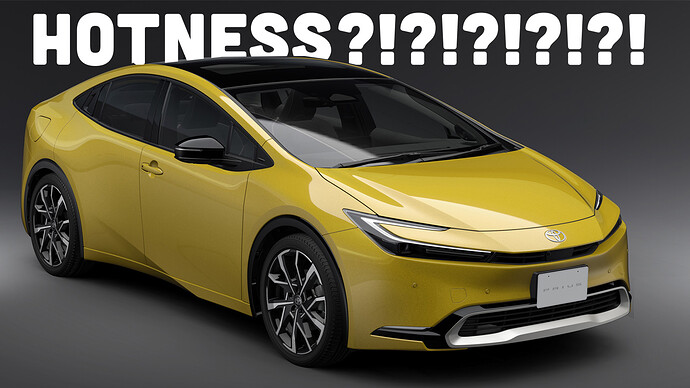 Wow - it’s gone from ‘sure it’s economical, but the looks!’ to ‘looks great, good performance, great economy!’ I may have to rethink my next car choice.

Why does it have to be shaped like an egg?

Looks like a very slick, modernized Prius. Like a concept car for a car show that would ever be built… and Toyota built it. Nice.

A plug-in hybrid is probably my next car, but I am keeping my 1999 Civic and 2007 Town and Country van going as long as feasible. The new Prius looks more than acceptable, but a small SUV might make more sense for my wife and me because of the higher seating position compared to the Prius.

A plug-in hybrid is probably my next car

I’ve had my Lexus NX 450h+ plug-in hybrid for one week, as of today. So far, I have driven 275 miles, and the 15.5 gallon gas tank still has an estimated 428 miles of driving remaining. That is because almost all of my driving has been local errands, well within its 37 miles all-electric range. Most of the gas that has been consumed was on the 70 minute drive home on the Interstate, where I kept it in Hybrid mode.

I purposely didn’t recharge it last night, and today, on my way back from my doctor’s office, when its battery charge dropped to ~30% the gas engine automatically kicked-in, and it alternated between Hybrid Mode and all-electric Econ mode.

This model is mechanically identical to the Rav-4 Prime, but with a lot more bells and whistles, a much nicer interior, and–to my eye–much more pleasing styling. But, if you want the same mechanical package–with a tiny bit more range because of its lighter weight–you might want the Rav version. And, the Rav is also a tiny bit quicker. My NX takes all of 5.6 seconds

Just be prepared for a very long lag time between ordering it and receiving it. It actually takes longer to get a Rav-4 Prime (possibly 6-8 months), while the Lexus version usually arrives in ~4 months at this point. I was lucky that I found a dealer that was getting three NX 450h+ models about 2 weeks after my visit to the showroom, and one of them was in my chosen paint and interior colors.

If you have any questions, you can send me a direct message, so that we don’t bore everyone with the details.

And, bear in mind that these models are not sold in all states. Most of them go to CA, with a much smaller number divided among NY, NJ, CT, MA, and a few other states. In the Facebook groups for both models, one person stated that he drove from TX (where they are not sold) to CT for his NX, and another guy, in GA, stated that he is willing to drive long-distance to get a Rav Prime since they aren’t sold in his state.

he drove from TX (where they are not sold) to CT for his NX, and another guy, in GA, stated that he is willing to drive long-distance to get a Rav Prime since they aren’t sold in his state.

Why are they limited to certain states? Build capacity? Ambiant temperatures? (gets hot in SoCal…)

Pretty sure it’s the limited number they can build right now. And the Rav4 Prime being one of Consumer Reports top rated vehicles doesn’t help.

Cars.com lists 1 Rav4 Prime within 500 miles of me. Other than that there are several in Denver and beyond.

Why are they limited to certain states? Build capacity?

Build capacity is one factor, but Toyota has apparently decided to concentrate their sales in the states with the most stringent air quality regulations. I think that is probably a good decision on their part, but they are now getting ready to begin manufacturing these models in Canada (mine was manufactured in Japan, in September 2022), so perhaps the battery & chip availability is improving, and maybe they will begin to expand sales to other states.

I wonder how much a headlight costs?

The 2023 Prius isn’t in the parts catalog yet where I looked.

The new Prius looks nice. Our next car is going to be a Hybrid or a PHEV. We have an older Prius, 2011, gets around 55 MPG and it gets the job done. Handling and road noise are issues, but with $6 per gallon gas here in CA, who cares. We recently bought a Corolla Cross and it does well on the fwy mileage, close to 40 MPG with my driving. But the hybrid that is supposed to be out next yr, gets worse gas mileage than the RAV Hybrid which doesn’t make sense. Here in CA, the RAV Prime has a $10K add on to MSRP at best if you can find one.

I like it. It’s rakish, aerodynamic, and looks very contemporary, without falling into the trap of excessive surface treatment that has engulfed Hyundai’s cars.

great, its a good news looking forward for next year

Excellent point. Car looks great, nearly perfect. But perfection can come with a high price. Ask someone who married the high school classmate voted “most likely to become a model”. … lol …

Ask someone who married the high school classmate voted “most likely to become a model”. … lol …

Or, ask someone who attended his 25th HS reunion about how some of the “most likely” folks turned out.