I’ve got a tire question that may call for our friend and colleague @CapriRacer to weigh in. In the 1950’s and '60s, my uncle had a large taxi fleet in New York City (350 cars). He complained frequently about the cost that replacement tires added to his overhead. To control that, he used mostly “retreads” or “recaps”. Those types of tires are not generally available today. Why?

They are for trucks. I suspect with the relatively low cost of bottom line tires, by the time you inspect, grind the tire, and remold them, there just is no profit left for a $50 tire.

In college I would buy the Firestone recaps. Four for $100. It’s what I could manage.

A bit of digging on the internet lead me ONLY to truck tires, offroad, ATV and the like. I could not find any passenger car tires at all.

I used to buy retreads for my first car. They were readily available.

What happened to car tire retreads? I am curious, too.

They are for trucks. I suspect with the relatively low cost of bottom line tires, by the time you inspect, grind the tire, and remold them, there just is no profit left for a $50 tire.

In college I would buy the Firestone recaps. Four for $100. It’s what I could manage.

for heavy duty trucks. I use them on my fleet. I have not been able to find them in any passenger sized tire- at least not from my tire guys. I have a couple vans that run duallys on the back that I would love to use recaps on.

It’s possible this is a legal issue of some sort- as recaps are illegal to run on the front of the heavy duty trucks. Perhaps folks are nervous about people inadvertently running them on front tires?

Way back then generally cars were slower, tires were bias ply, much less flexible sidewall, less grippy and in general the tread wore out much faster so conceptually it made some sense to replace just the tread.
On the other hand retreds were often done by unknown 3rd party remanufacturers basically “glueing” on new tread (very different from manufacturers molding a new tire) so the quality was often a complete crap shoot. Out of round, very difficult to balance, tire blowouts and tread separation common.

Using retreds on a 1950’s taxi fleet where the 100 HP cabs rarely exceeded 50 mph and the cars otherwise not severly stressed made common and financial sense but on a modern sedan where drivers routeinly drive 80+ MPH on highways?

Today retreds remain legal and available for on Big Rigs and trailers EXCEPT on Steer Axles but realisically most operators discard the tire after regrooving. Cheaper than the costs of rescueing a stranded rig.

Retreds for cars are still generally legal but would be a worse buying decision in every respect than even the cheapest Chinese product.

As others have stated, retreading is alive and well. It is mainly used in situations where it makes sense economically - trucks, aircraft, that sort of thing.

But for smaller tires, it just doesn’t make sense to retread a tire when a new one is only a few dollars more.

Also, there are 2 types of retreads - cap and full. In the case of a full retread, and the tread and the sidewall are replaced to the point where the original tire brand may be obscured.

The cap - commonly called recap - is just replacing the tread. In that case, you can still read the name of the original tire manufacturer.

The most common cap is for the tread to be made (and cured) as a separate unit and cut to length with a bonding layer of rubber between the precured tread and the casing. Not only can the tread be made of rubber that will wear better than can be processed the other way (by extrusion), the process makes for very dense rubber.

Oh, and regrooving? Perfectly acceptable on tires that are regrooveable - it will say so on the sidewall. But you do have to do it in a way that makes sense. And “X” pattern is not that way.

And lastly: BillRussell said: “I was driving on Rt 95 one day, in the left land, and saw what appeared to be a tire rolling down the highway next to a car in the far right lane. Both moved into the breakdown lane. Later I realized what I saw was the tread that had totally separated from the tire in one piece and was rolling down the road. It was either a bad retread, or a badly manufactured tire.”

That was most likely a Runflat - a tire operated without benefit of inflation pressure and damaged to the point where the sidewalls detach from the tread, leaving the tread as a hoop. If you had captured that hoop, there is a 90% probability you could have found the hole that let the air out. The other 10%? The hole is in the damaged area and can’t be located because of the damage.

+1
And, those who are as old as I am might recall the very high number of Greyhound bus crashes resulting from skids and tire blowouts in the late '60s-early '70s. When these crashes were finally investigated properly, it turned out that Greyhound was “re-grooving” their tires. In other words, bald tires had new grooves cut/burned into them in order to get a few thousand more miles out of the tires. This was truly a Russian Roulette approach to vehicle safety.

When this practice was publicized by the press, and after the families of a LOT of dead Greyhound passengers sued for criminal negligence, Greyhound changed this incredibly dangerous practice. IIRC, the current owner of Greyhound is not the same as the owner that decided to play very dangerous games with their tires back in the '60s & '70s.

Of course back the, the normal highway speed limits were 65 and the interstate was 70. I never had casing trouble with the firestones, but I bought retreads from sears for my vw. Those had some casing issues with apparent dry rot but still held air.

Yes but remember that during the '50’s - '60’s most cars couldn’t hit 100 MPH and even if you could the Eisenhower Intersate Act was signed in 1956 so there weren’t many places to do that speed and even by 1967, poor handling bias ply tires still made up 87% of the US market.
Then again my 1962 Chevy had a steel dashboard, no seatbelts, drum brakes and your VW probably had the “laptop gas tank” and the “tuck and roll” swing axel so safety obviously wasn’t a priority either.

So given that environment and the alternatives, retreads were a marginally acceptable, “rock bottom” choice but I doubt that anyone would even consider it today.

my 1962 Chevy had a steel dashboard

Besides having an unpadded steel dashboard, the portion of the '62 Chevy’s dashboard in front of the passenger actually had a fairly sharp edge. My father was contemplating the purchase of a left-over '62 Chevy, but the “Jet-Smooth Ride”–which was actually a nausea-inducing ultra-soft, constantly oscillating ride–was just the first no-go for him. When I pointed-out the dangerous design of the dashboard, we headed over to the Plymouth dealership, where their '63 models had handling and ride qualities far superior to that of the Chevys, but the Plymouths also had dashboards that weren’t inherently hazardous to the front seat passenger.

Yeah my Pontiac had a steel dashboard but I put seat belts in it. The vw before that had the gas tank in the front and no seat belts. I hate to say it but the seat belt in the vw would have been a bad idea when it got t boned.

This was the dashboard of the '62 Chevy, complete with a sharp, unpadded corner directly in front of the (almost always) unbelted passenger: 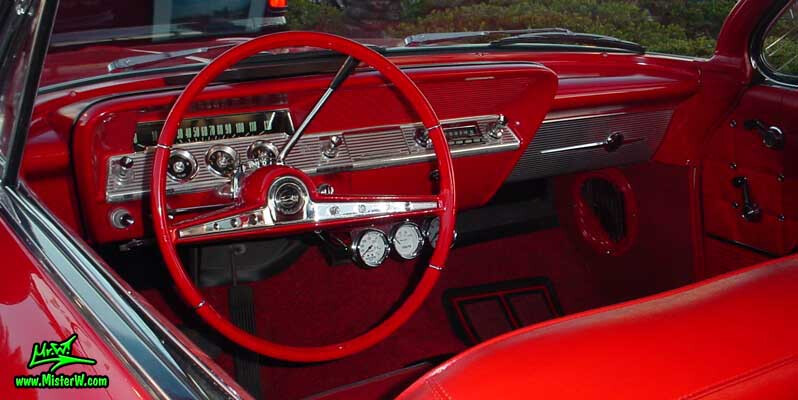 This is the dashboard of the '63 Plymouth, with no hostile surfaces in front of the passenger. The small “hood” over the gauges was lightly padded, and–overall-the dashboard design was much safer for the occupants. 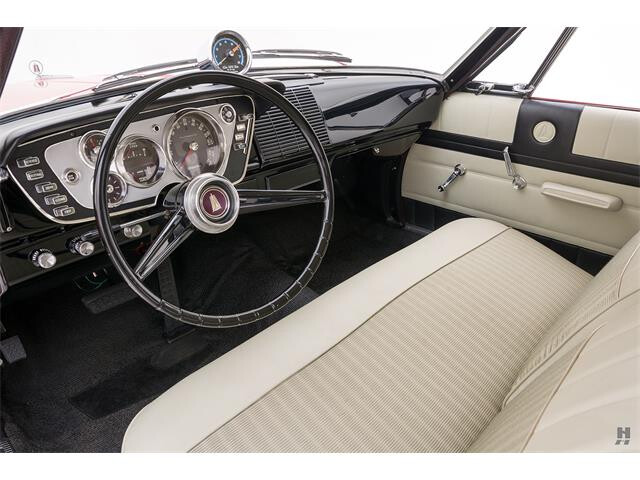 And the Plymouth had a much better automatic transmission, and an engine at least as good as the Chevy’s.

the Plymouth had a much better automatic transmission, and an engine at least as good as the Chevy’s.

Yup!
The Torqueflite trans was top-notch, and Chrysler’s engines were excellent in those days. And, as I mentioned earlier, there was just no comparison when it came to handling. The marshmallow ride of the Chevy did not provide cornering ability anywhere near as good as that of the Mopars.

And, in addition to that questionably sharp-edged dashboard, then there was Chevy’s X-frame, which provided zero side-impact protection. If one opted for one of GM’s more expensive marques, then you got a proper frame with side rails, but those who bought a Chevy in those days got they X-frame, which was a genuine hazard in the event of a side impact.

Somebody touched on it earlier but I’ll repeat. When radials were introduced, retreads (for cars) went away. They just don’t go together!

When radials were introduced, retreads (for cars) went away. They just don’t go together!

I never thought about it previously, but you might be right. I used to drive past a Bandag (a high-quality retread company) factory on a regular basis, but it was closed quite a few years ago. Bandag still exists, but…

In 1963, Chrysler Corporation introduced a 5 year, 50,000 mile power train warranty on its products. This was an industry first. The 1963 Plymouth was more an intermediate sized car, although the seating capacity was as good as the full sized Fords or Chevrolets. In 1965, there were two Plymouth lines, the Belvedere and the Fury. The Belvedere was essentially the 1963 Plymouth with different trim and classified as an intermediate. The Fury was a full sized car like the Fords and Chevrolets of that model year.
Getting back to tires, I drove many miles on recapped tires back in the early 1960s. We had a local tire store run by a family friend who had molds and did the recapping. When I needed tires, I would call him and he would hold a couple of premium tire casings and recap them for me. I would rather ride on one of his recaps than a junkie 3rd.line new tire.

but the Plymouths also had dashboards that weren’t inherently hazardous to the front seat passenger.

Yeah they were. All vehicles had unforgiving steel dashboards. Padded dash was an option on most vehicles.

As for handling, all were about the same. They just had different corning characteristics, but thay all took a corner at about the same speed. I had a 66 Pontiac Catalina, a 66 Ford Galaxie and a 66 Dodge Coronet. Not at the same time though, but one after the other. The Pontiac was the most fun to corner with because it drifted so easily and remained flat in the corner. The Ford rolled like a criss craft, felt like it was cornering on two wheels but in the end, it maintained the same speed as the Pontiac on my favorite off ramp. The Dodge was sort of in between, but no faster or slower on the same off ramp.

I also had a 1960 El Camino that could out corner all of them, but it was modified.

The Chrysler corp cars with their torsion bar suspensions cornered a lot flatter than anything from GM or Ford.

I can’t be sure anymore but I’m pretty sure our 57 ford fairlane 500 had a padded dash. Plus the recesses steering wheel and belts. It was a real padded dash, not hard cardboard like my 68 dart.