I mean… That’s on the font makers here.

Just to go off topic, that is not really funny. In the age of no consequences for behavior, the rates of disease have been skyrocketing. Some have life long consequences. The difference of today is that in the 60s we really never expected the adults to take us seriously. Now the adults are on the band wagon and busy writing how to books.

Sometimes the car needs to be driven a little to reset the tpms, like over 15 mph. Others you have to reset them. Mine did not register the new reading until I drove it a little after setting off the light and adding air.

According to answers.com, the original name of Los Angeles is (copied from the entry): El Pueblo de Nuestra Señora la Reina de los Angeles de Porciuncula (the Town of Our Lady, Queen of the Angels of Porciuncula), but was later shortened to just Los Angeles.

Also, in the Star Wars movies, Han Solo keeps talking about making the Kessel Run in less than 12 parsecs. This has always bothered me, because a parsec is a measurement of distance, not time. It is about 3.2 light years. A light year itself is about 6,000,000,000,000 miles.

Maybe he was bragging about knowing a special shortcut!

in the Star Wars movies, Han Solo keeps talking about making the Kessel Run in less than 12 parsecs. This has always bothered me, because a parsec is a measurement of distance, not time.

Yet another unit-analysis failure … lol …

Maybe he was bragging about knowing a special shortcut!

That’s exactly what it was, a shortcut.

In the initial film, Solo brags that the Falcon "made the Kessel Run in less than twelve parsecs".[b] As the parsec is a unit of distance, not time, different explanations have been provided. In the fourth draft of the script, Kenobi "reacts to Solo's stupid attempt to impress them with obvious misinformation." Lucas acknowledged the misnomer in 1977, saying that Han modified "the navigational system to get through hyperspace in the shortest possible distance". On the film's DVD audio com In The ...

I’ll say this, you folks are a wealth of information. Not to be trifled with.

Not to mention the grating reference to JIGawatts versus GIGawatts to power the time traveling DeLorean in the movie Back to the Future.

I swear to you, this is the truth.

What are you talking about ?

Which one of the Hogan’s Hero’s secretaries did you folks like the best? The first one (Helga), or the second (Hilda)? I’d choose the first, Helga myself.

A comedy show about prisoners of Nazi’s is despicable and has nothing to do with Tire Pressure.

A comedy show about prisoners of Nazi’s is despicable

That program was one of the most puerile sitcoms… ever… and after one attempt at watching it, I vowed to never again watch that conglomeration of crap.

How anyone could have found humor in a sitcom based on allied soldiers and aviators confined in a Nazi POW camp is beyond me. If anyone thinks that those POW camps were a walk in the park for the guys who were confined there, I suggest that those people need to re-read their history texts.

humor… in a Nazi POW camp?

When the program first aired in 1965, that issue was much discussed. Apparently my dad thought the same as you, as I never saw the program until after I went away to college. I don’t hold the same antipathy however, consider it as just a pretty good sit-com from days of yore. I doubt the program would have survived more than a year ---- rather than the full six years from 1965 to 1971 — without Bob Crane (who played the main character). He had the same sort of on-screen charisma as Tom Hanks, George Clooney, and the better actors of today. Otherwise, the other actors at best mediocre, just a silly comedy is all. TV doesn’t claim to represent reality. It does have some practical benefits tho. I sometimes have to participate in boring Zoom calls in the evening as part of a technical project I’m helping with; HH’s is on at the same time and I watch Hogan’s Hero’s instead of listening to the boring parts of the Zoom calls …lol …

Yes condemnation received however not everyone was treated horribly. Rations were scarce for everyone inside and outside.

I just finished reading the last stand of the tin can sailors about the famous battle of Leyte gulf. We were outgunned terribly and ships went down, men in the water. The men in the water were fearful that the guns would be trained on them. For the book one if the enemy gun chief was interviewed and said when he saw the men abandon ship, he instructed that the guns be trained away from the men. They respected the fight that had been put up and no need for further killing. Maybe it’s a navel thing. Don’t know, but people are more alike than different regardless of the side they are on. My dad had the same experience with German pows that were assigned locally for farm work. Same as us, just different leaders. Not to deny atrocities.

Bob Crane (who played the main character). He had the same sort of on-screen charisma as Tom Hanks, George Clooney,

Yes, he must have been a good actor in order to be able segregate his off-screen obsessions from his on-screen performances. Unfortunately, his obsessions may have led to his murder. 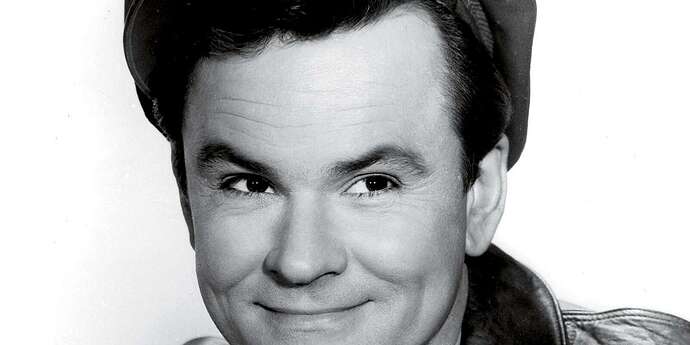 Bob Crane made millions of viewers laugh as the star of 'Hogan's Heroes.' But his easy smile masked a sexual obsession that may have led to his murder.

That program was one of the most puerile sitcoms… ever… and after one attempt at watching it, I vowed to never again watch that conglomeration of crap.

The sitcom was loosely based on the Movie “Stalag 17” (starring William Holden) which was more of a Drama/comedy. There were some comic moments in the movie, but the movie was a drama. The TV show and movie were very different.