You can change your own oil, maybe. 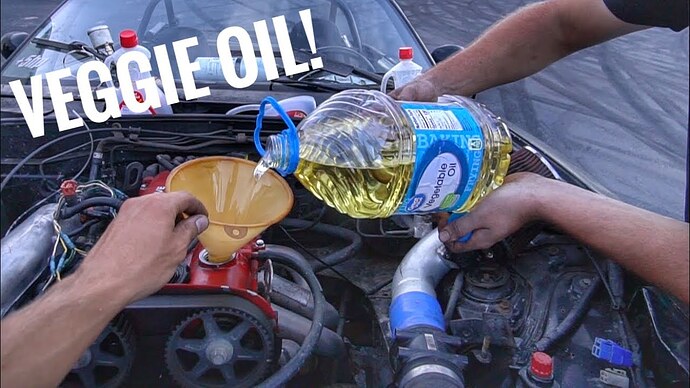 lol … reminds me of the famous physicist Richard Feynman. He taught a class to non-scientific oriented college students many years ago at Cal Tech about how to use a method called “unit analysis” for this sort of problem. 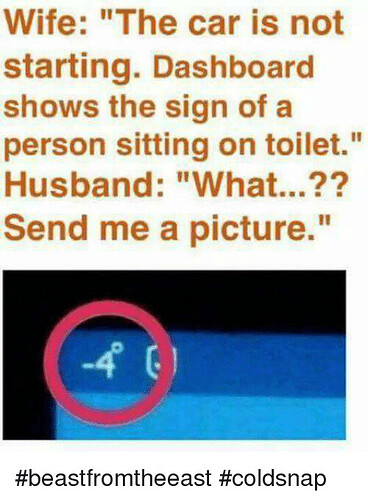 Now THAT’s funny! … lol… what’s worse, I can see how someone might get confused by seeing it.

Remind me of yet another story … Years ago I was telling a co-worker who wanted to go back to college that he should investigate whether the school accepted the CLEP test. CLEP stands for college level equivalency program, something like that. The idea is an older, experienced person applying for college takes this test and if you pass you get automatic credits, for what you already know. So he asked his wife to call the college.

College staff: Hello, how may I help you?
Wife: Hello, my husband is applying and wants to know if he can take a CLAP test.

My mother worked in a hospital and had some funny stories, especially about the maternity ward. Uneducated mothers would overhear a conversation and latch onto a work they thought sounded beautiful, then name their child that word. Sometimes the doctors or nurses would have to explain why vagina was not a good name for their new baby daughter.

I’m reading a book on Stan evens, he related a story of a journalist reading the teleprompter on the 50th d day anniversary. She said it was during world war eleven. Somewhere in the Midwest.

Can you go into detail?

@jtsanders Remember an old joke, lady got a menu in the hospital, thought it was a list of baby names she could pick from, now meet lemonjello!

Uneducated mothers would overhear a conversation and latch onto a work they thought sounded beautiful, then name their child that word.

I thought some baby was actually named placenta.

So anyway, they did their two week honeymoon on his boot leave and then he shipped out on a cruise. A month or two later he got a letter informing him that she was with child. In the letter she told him the doctor wants to know if it’s a boy, do we want it circumcised. He responded “No, let him wear it off like his old man did.” You could tell she was not a happy camper when she wrote to him after visiting the doctor.

Can you go into detail [about the method of unit analysis]?

It’s just a way to make sure you are not comparing things that can’t be compared; i.e. a warning you are engaging in nonsensical analysis. % is a ratio of two numbers, and therefore is unit-less. It has no units, other than the word “percent” which isn’t technically a unit. A unit is something you can measure, a physical measurement, like “pound”, or “inch”, “mile”, “second”, “hour”. The mistake above was not considering whether % and psi could be compared. They can’t b/c percent is unit-less, and psi has the units of pounds per square inch.

Unit analysis is also used to make sure you aren’t making the mistake of comparing apples to oranges; for example , if you heard someone say the distance from Los Angeles San Francisco is 60 miles per hour, you’d know the statement was was nonsensical and should be ignored, b/c the unit for distance is miles, not miles/hour.

Unit analysis is also used to predict what the equation to a known answer might be. Used in the same way an artist might draw some doodles first, before beginning a painting. For example there’s something in the basic theory of physics called the “fine structure constant”. It’s a pure number around 137 as I recall. If you were a physicist and wanted to figure out what the equation that would result in a unit-less 137, you’d try to figure out which basic physical parameters of the universe that have units, but when combined into an equation, all the units would cancel out, netting a unit-less number. If that number was 137, you’d be a smiling physicist the day you figured that one out.

The formula for the fine structure constant involves the electrical permittivity constant, the charge of an electron, Plank’s constant, and the speed of light.

Somehow I don’t think that is going to help but what is this lost angels you speak of?

Back to babies though that might explain some of the odd names I’ve seen that I could not spell or even pronounce. You can’t say ms anymore either so it’s a trap.

what is this lost angels you speak of?

lol … I think the name Los Angeles means “city of the angels”. Recall that incredible Doors tune? The lyrics played on this theme

LA Woman, by The Doors

“Well, I just got into town about an hour ago
Took a look around, see which way the wind blow
Where the little girls in their Hollywood bungalows
Are you a lucky little lady in the city of light
Or just another lost angel, city of night”

I stand corrected. A friend wrote a book about his time with the doors. Lucky to get out alive as I recall but been a few years since I read it.

A friend wrote a book about his time with the doors.

No Doug Cameron. Don’t remember if he was just on the crew or did some back up drumming or keyboard.

I’m very familiar with Sugerman’s book, but not Cameron’s. Sugerman died at age 50 I think. Music business is very hard on folks.

Yep knew a few with the teen bands. Toured Minnesota, South Dakota, Iowa, etc. always on the go at night traveling to the next gig. Trying to keep academics up too at the same time. Not at fun life. My room mate tried to teach me guitar but just didn’t take, but I yeah I knew guys in high school and college. One of the groups was called the green men. Died their hair green so you had to be devoted. Still see one at reunion time, not green anymore, but another did himself in.

Now that we are way off topic. Life in the 60s.

RE: Daughter names:
As a joke I suggested Chlamydia.