Last week my rear pass tire popped and I hit a curb due to it. Axle seems to be pushed in a bit on that side and the rear driver side is pushed out as well. There is now also a clunking sound when I press the brake pedal from what appears to be the passenger rear wheel. BTW 1999 V8 5.0L Ford Explorer XLT. I know this picture is MID but you can definitely see the pass side of the axle is pushed in. Is there anyway I can fix this? It drives fine other than the clunking from what I really assume is the caliper. The brake pads on it appear to be completely stuck and won’t get out of a certain position. 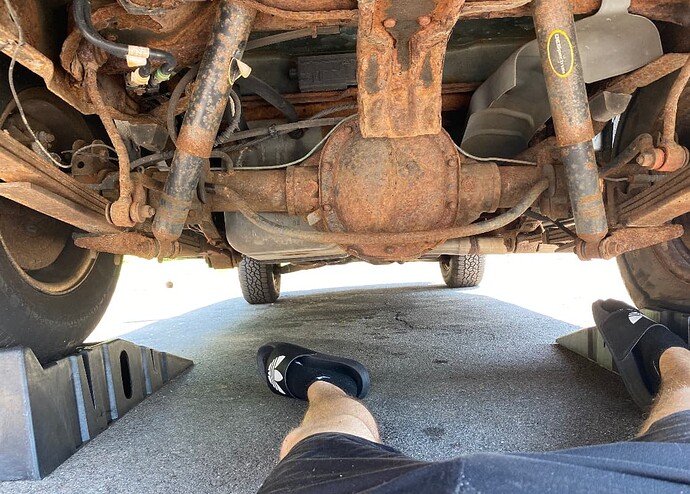 I expect you already know that to effect a proper repair is going to require quite a bit of shop work, likely replacing various suspension and brake parts. Possibly much of the rear axle ass’y. While you say your Explorer can still be driven, me, I wouldn’t, looks unsafe to drive from the photo above. From the photo it appears that the left solid axle is tilted compared to the right side, which is horizontal. If so, that means the solid axle is bent. Could just be a geometric distortion in the camera though. Could seem to drive ok, then go completely unstable without warning, for example if you go over a bump in the road.

If I had that problem my first diy’er driveway step would be to check the brake lines, including the flexible parts, are not being stretched or otherwise damaged. Then take a closer look at the right rear brake assembly by removing the wheel for a look-see.

I have a 50 year old Ford truck, but the rear axle and suspension on yours looks quite similar to mine. There are axles (rods) inside the solid axles, on each side, from the differential to the wheel hub. I’d probably want to take a look at those too, esp to see if either is bent.

There’s a lot of rust under there too. Wow.

Makes me wonder how much/if there’s rust elsewhere on the vehicle. And whether it’s worth fixing or not…

Since my truck is out of commission at the moment I do plan to go on a de rust spree. To be honest I’ve never really been in the rear so I never got to see the extent of the rust. Looks bad but 95% of it is still surface rust. Nothing is structurally compromised except one bracket that I have ordered already.

The angle that makes it looks bent is because the spare tire on the truck was unfortunately deflated the day after I put it on so the truck was slanted. 2 months from now I had originally planned to rebuild my suspension entirely along with all of my brake system. I suppose the time has come now. None of the brake line on the impact side looks damaged in the slightest. Early this morning I discovered a shot leaf spring bracket and one of my sway bars look destroyed to me. I don’t think this would affect the axle? I’m willing to put in the time and money to it as it has a lot of sentimental value. Given I get the tools and have the time how much of a process would it be to replace the rear axle if it’s completely unsalvageable?

That amount of rust is normal for a 23 year-old vehicle in Minnesota.

Fair enough, on the rust.

Since I live in the South, any rust is a big red flag to us.

Leaf springs are pretty tough. Hard to push both of them sideways. I agree. Several things can be cause of repositioned axle housing. I vote for shackles too…

Swapping the rearend is not terribly difficult. You should measure whether the wheels are still mostly vertical… i.e. camber angle should not exceed 0.5 degrees negative.

Fix the bracket (likely actually the spring shackle) see if that centers the axle. Listen for bad axle bearings…a rumble when driving… and determine if the axle need repair.

Need to Jack it up and get the rear axle on Jack stands and see what’s going on with the stuck brake caliper and clunking. Maybe the impact broke the caliper mount or something? Should be able to rotate the tires and check the condition of the axle somewhat while it’s on stands. Trans will have to in neutral, so a good idea to chock the front tires.

I agree that the broken spring hanger or mount is probably the reason the axle is offset.

The spring shackles may be bent. 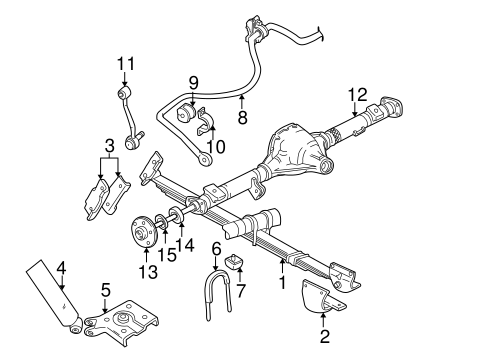