I just recently purchased a 2020 Camry LE(normal version, not a hybrid), but had a few questions:

Make use of the least read book in the world . Your Owners Manual . It will list all fluids that the vehicle uses and the service schedule .

In general, go by your owners manual. Generally use the severe service change intervals. Watch for time as well as mileage intervals.

What kind of oil specifically does this car take?

I wonder if someone gave a completly wrong answer to a question like that if the person asking would even verify that it was correct.

Usually you can go a little bit thicker with the oil up to a point until the variable valve timing will not function correctly as it expects a certain viscosity oil at running temperature. Youcould switch to 5W20 after 100k miles. Heavier oil lubricates a bit better. It has a thicker oil film so the contaminants have to be larger to be thicker than the oil film. It’s important to use the proper fine filtering oil filters when using such thin oil.

22 years ago you could put 20W40 in such an engine and it wouldn’t matter as long as it wasn’t started when it’s very cold. All engines are made to handle very thick oil as this is will happen to any oil in very cold weather. The engine is made to start at -30F even if the coldest it gets for you is -10F. So 0W at -30 is like 10W at -10F.

And how is the average person going to know what that point is . Stop confusing people with your ridiculous posts .

His advice is not just ridiculous, and it’s actually potentially dangerous. The OP’s engine has Variable Valve Timing, which requires the correct oil viscosity. Putting “heavy” oil in that engine would almost surely screw-up the VVT.

IMO the difference between 0W-16 and 0W-20 is pretty much inconsequential. But by all means refer to your manual, not the internet !!

MO the difference between 0W-16 and 0W-20 is pretty much inconsequential.

+1
My engine (very possibly the same engine as the OP’s) is supposed to use 0W-16, but the manual states that if you’re just topping-off the oil, 0W-20 is acceptable, and that at the next oil change, you should use 0W-16. 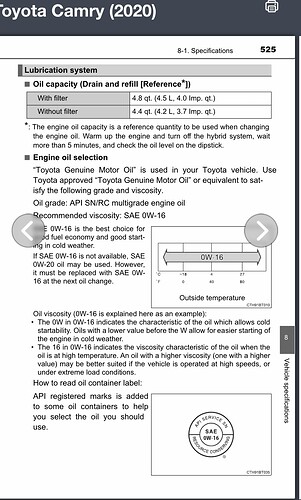 but the manual states that if you’re just topping-off the oil, 0W-20 is acceptable, and that at the next oil change, you should use 0W-16.