It could be something as simple as a bad connector or faulty wire.

Thanks for the great story

Hubby was lead maintenance and national registered electrician for a large global company where we live. While still working, he resolved issues that techs flown over from Germany could NOT fix—and they installed the machines lol. He had access to any tool needed to fix all things diagnostically. Enter retirement and all his tools were brought home without the company high dollar tech toys. He has fixed issues that dealers said weren’t the issue, and voilà!!! Running smoothly again.

Anyways, Jeff, new repairman, heard the saga and immediately said, dealer should’ve replaced wire harness instead of just inspecting it. He has all the software and will check the replaced TPS for malfunction. He is confident it will be fixed properly. It also helps that hubby and I were both trained EMTs under Jeff’s late father, our County’s EMA/EMS Director.

Thanks so much again!!! As you already know, Boston is lots of fun

Look forward to hearing what/if the faulty TPS was actually replaced. Whole dynamic has changed. We have an ally

Trying to isolate the wiring started it all. Being retired now, hubby doesn’t have GM software for diagnostics. The new mechanic will check it thoroughly and call. Course the paperwork with part numbers replaced wasn’t in the truck when he ran to Auto Zone and then to the new shop. I have a good feeling we shall have a successful remedy. Thanks for your input

IMO the dealership’s approach is sound, albeit maybe a little cumbersome. Me, I’d probably not switch horses mid-stream, but as long as I was being treated politely and w/respect, I’d just let the dealership continue to work the problem. Hopefully in OP’s case, someone with a fresh look at the problem will solve it quickly.

Well, dealership told him to “get the h***out and not come back” ‘cuz he questioned their just clearing codes 2nd time and said it was fixed as well as asked if the TPS replaced was faulty.

. Sooo, when it faulted yesterday and Auto Zone pulled up same codes, he asked for recommendation of reputable mechanic hence why we are at Jeff’s shop. To go 3 miles he totally lost power 3 times and had to pull over, shut off, and wait to start again. Wasn’t safe to be in traffic so managed to get to shop and called me for ride home (23 miles). I am a huge fan of mitigation for safety.

I suspect you’re on the right track. The best problem solvers look at a problem globally and then eliminate obvious solutions in a serial way, often mentally while picturing the whole process. That can be time-consuming and is not the way the dealer’s mechanic worked. For them the solution is to replace pieces, the most commonly faulty first. Their system is generally profitable and often succeeds, even if that success is accidental. Here you may well have a problem in the connections between the major pieces, and those faults are much more tedious to diagnose and fix. The new mechanic’s idea to replace the wiring harness to the throttle body is a way to solve the problem without time-consuming testing.

Same sort of thing, 40 years prior, poor customer treatment by a dealership, I decided not worth the hassle, just loose the shop & instead take an adult night school auto repair course. Before that experience I was perfectly happy to have auto shops repair my cars, and I’d probably still be using auto repair shops now. And sparing the forum members my stories … lol …

You mentioned “flood” in a different thread, does this vehicle have a “Salvage” or “Rebuilt” title?

“You mentioned “flood” in a different thread, does this vehicle have a “Salvage” or “Rebuilt” title?”

The new mechanic has had the GMC Canyon for 2 weeks now. He had other business to tend to while he worked this one in. In talking with him on Friday he said he replaced the wire harness and noticed that the ECM was new in the last year or so. We bought it in June 2021. He test drove after replacing wire harness and after 20 miles the low oil pressure sensor faulted. So he started tearing into that which required removing the starter. He discovered corrosion and had to order a new “plug” which will be in tomorrow (Monday). He checked the VIN and saw it was sold at auction–which we knew from the Carfax report and also suspected it had been in a flood–hence the severe corrosion. Our Carfax report mentioned nothing of a flood. There was one owner and was sold at auction out in Western Michigan. The paperwork is all in the glove box so won’t know more until we get the truck back or go retrieve it. We gave all the paperwork to new mechanic so he had a heads-up on what had been done etc.

We received the title in 7 days from the dealer. “Flood” was first brought up during our conversation on Friday. Will know more tomorrow as to what happens with the new “plug.” It ran perfectly for an entire year. Hoping the test drive is successful, or we keep finding more issues…Thanks Nevada_545

Hope i am on my original thread for 2016 Canyon Throttle Body Sensor.

Update: Just got truck back after another month of tracking down electric issues. We replaced many sensors and so far have driven 100 miles w/o any codes thrown. Yeah!! Replaced 2 wire harnesses after one was defective with corrosion. Total of $3,600 and I do believe success!! I will get the actual parts but they are in the truck. Have a picture of wiring but don’t know how to post or if allowed. 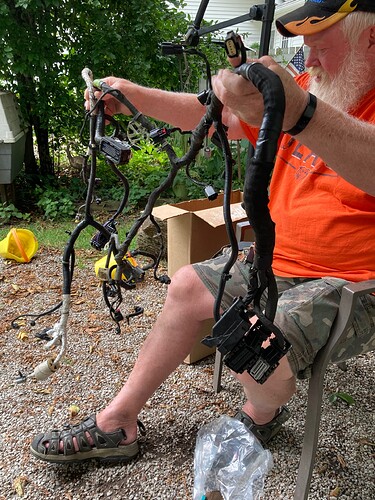 First TBS Dealer replaced was faulty but they never checked it, instead kicked us out. So new mechanics, after checking it found it needed replaced so they had to use that for the core charge. Then the low oil pressure sensor tripped after they thot they had fixed it. So then had to order wire harnesses and now after 125 miles, it runs great

The ECM had been replaced before we bought it in 2021; 13 months ago. Photo shows some of the one wire harness.

Thanks for the update. As I recall the problem was thought to be problematic wiring between the throttle body and the ECM, right? Were there other problems as well? Some years ago there was a problem where drive-by-wire cars (such as your Canyon) would accelerate for no reason, sometimes causing accidents, and manufacturers put in more software checks and hardware sensor to make sure that didn’t occur, so maybe part of the issue. In any event, glad you got your Canyon back on the road and reliable runner!

To post a photo , transfer it to your computer in jpg format, then click the upward pointing arrow in the edit window.

Photo shows some of the one wire harness.

That’s one big tangle of spaghetti … lol … Replacing the throttle body with a new one, and the new one doesn’t work either, that’s just plain bad luck. Sorry you had to go through all that, and no vehicle to drive to boot. One good thing from all this, you’ve found yourself a good shop. Good driving & best of luck!

BTW, did you get any more info on the “flood” issue?

BTW, did you get any more info on the “flood” issue?

Actually, presumed it was “flooded” after storm surges at some point, but since no Hurricane showed up, it’s anyone’s guess. Hey GREAT NEWS

Truck is still running. YEAH!!! Yes, we have Larry—the tech who discovered the corrosion. Very reputable shop and had ours not been a “walk-in” it wouldn’t have taken so long. We are happy and glad to be back in the hauling of our daughter’s stuff to her new home. Yeah

Thanks for all the suggestions. Oh yeah, a crank sensor was also replaced. Thanks

Some years ago there was a problem where drive-by-wire cars (such as your Canyon) would accelerate for no reason, sometimes causing accidents, and manufacturers put in more software checks and hardware sensor to make sure that didn’t occur,

And this is why I would only buy an older vehicle with a cable-actuated throttle body. If the TPS or wiring harness malfunctions, unintended acceleration cannot occur. The result would be too much fuel, and not enough air, which would make the engine stall.

I would only buy an older vehicle with a cable-actuated throttle body.

My Corolla has a cable throttle. The reason the manufactures diverted to the electric-motor controlled TB isn’t to annoy the car owners. It is b/c of all the gadgets required to modify the effective throttle position for special driving circumstances. My OBD I Corolla has several of them.

On a newer Corolla those gadgets are presumably gone, replaced by the electric motor operated throttle valve. The third one above failed on my Corolla a few years ago. Never fixed it b/c requires a new throttle body. My foot does its job during warm-up instead. Ok for San Jose climate, wouldn’t work so well for winter-time Colorado.

There’s another advantage, engine compartment space. No need to provide room for those gadget, but also, for the air valves to work, they need a supply of clean air, provided by a fairly large diameter tube from the air cleaner box, snakes around the engine compartment and generally gets in the way.

Still, if I had the choice of car design, like you, I’d chose the cable throttle, and live with the other inconveniences.