My 2016 Canyon lost power and the Throttle Body Sensor code said it was bad. It was replaced, but after driving 150 miles it repeated the error code. Any ideas if these sensors should be replaced in the off chance they are defective? The dealer has had it a week now and isn’t too concerned about fixing it after giving them $500 to do so. Any ideas? 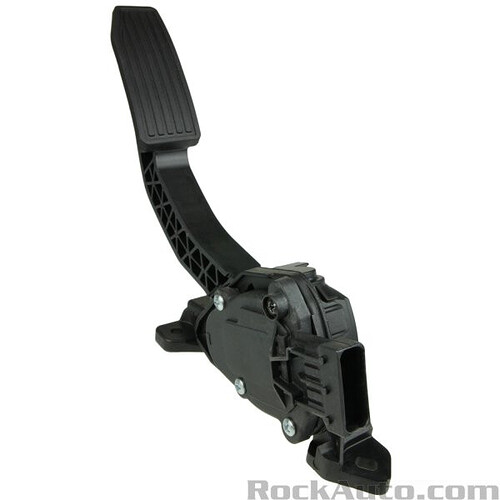 As you can see it’s made of plastic.

But the dealer is able test this sensor, so they’re probably standing around your truck scratching their heads.

I have not seen the sensor. I thought it was something on the engine. I will snapshot this and when I go over tomorrow will show/ask. Thank you. Forget the code number, but was just told Throttle Body Sensor bad. The error was service the stabilizer link, but specific code Throttle Body Sensor. Thank you for response.

I have not seen the sensor. I thought it was something on the engine

Thank you for the explanation. I will show my husband and print this out. That helps a lot. He was told it had to be reprogrammed so is it something he can replace? I found many different ones. Rock Auto best? Auto Zone? We steer clear of O’Reilly’s due to 3 smashed CV joints that had to be replaced. Fiasco. Appreciate your response.

There are several diagnostic codes related to the throttle position. P0121 … P0123, P222, P223, etc … well, you get the idea. In any event, I doubt any of those codes says the sensor is bad and should be replaced. The code just provides a clue to the tech about what the problem might be, which part of the circuitry, etc If you are able to provide the exact code number, maybe somebody here can provide add’l assistance.

Thanks!~ Will get it tomorrow since truck at dealer with paperwork. Will post asa I know.

Husband brought truck home. They could do nothing else.

The TPS electronics control several critical engine functions; those codes you posted refer to a fault with the communication function between the TPS and the main engine computer (ECM). It’s a one-way communication path, from the TPS to the ECM only. It’s used by the TPS to send the throttle valve angle to the ECM. The throttle valve angle (TVA), think of it as a number from 0 to 100, indicating the % the valve is open. TVA is a binary number, just a sequence of 0’s and 1’s, sent from the TPS to the ECM using only one-wire. You might ask how a sequence of 0’s and 1’s could be sent using only one wire? Thereby hangs a tale: The problem is that on your vehicle, that one wire, the only way for the TPS to send TVA, that wire isn’t working. So you have no wires at all for that function. I think you see the problem. Google “serial communications methods” for more info if interested.

Thank you very much. I did search for those codes and will re-read after reading your explanation. I found a picture that indeed shows not a pedal here: P16A1 Code Throttle Position Sensor Communication Circuit High Voltage

Dealer supposedly checked wire harness. They cleared code and said they fixed it. Is it possible the replaced part(s) is faulty or another of the issues that page lists? Appreciate your expertise.

I just re-read your explanation again. Passing it on to hubby so he has a clue.

Given the history of the symptoms the dealership’s approach to replace the throttle body makes economic sense imo. A diy’er might decide to diddle with the connectors and wiring harness first, making sure they are in fine fettle, then see if the problem can be resolved that way. If not then they’d replace the throttle body. But that’s b/c a diy’er doesn’t charge themselves an hourly labor fee. In your case the problem is likely solved, and if not then the harness and ECM will be their next suspects.

Not a Diy’er with computer issues. The replaced part failed as same codes came up again. That is when he took it back and they drove it 10 mi and nothing faulted so cleared codes and told him to “take a hike.” Dealer checked wire harness first. Hubby had no clue and took back to where he bought it a yr ago. They sent him to dealer for the GM software. Will print this all out and put in truck. Thanks loads. In researching further there are about 500 service bulletins on the 2016 lol. Not recalls per se.

The manufacturer publishing a service bulletin doesn’t imply the vehicle has a design fault. Not at all. It’s a method for informing mechanics around the world how to better service and maintain the vehicle. Embracing “Continuing improvement” is what they call it in business schools. I wouldn’t worry as much about a lot of service bulletins as much as I’d worry if there were very few. B/c if there are very few, the manufacturer may not be embracing the tried and true method of continuing improvement.

I think part of the frustration you & hubby are experiencing is that the shop isn’t carefully explaining the process they are using to solve your problem. And the reason for that is, first that it takes some time todo that, and second, that the process is quite complicated due to the computer circuity involved. The shop techs, by their own experience, probably feel many of the customers wouldn’t be able to understand what they are being told, and therefore trying to explain is a waste of everybody’s time.

Is it possible the replaced part(s) is faulty or another of the issues that page lists? Appreciate your expertise.

The mechanic may not have diagnosed it properly

I ask because it took 4 different O2 sensors on my daughter’s Kia Sedona before it stopped creating a fault.

Thank you one and all

I think part of the frustration you & hubby are experiencing is that the shop isn’t carefully explaining the process they are using to solve your problem. And the reason for that is, first that it takes some time todo that, and second, that the process is quite complicated due to the computer circuity involved. The shop techs, by their own experience, probably feel many of the customers wouldn’t be able to understand what they are being told, and therefore trying to explain is a waste of everybody’s time.

Great point. Hubby is very mechanically inclined and has fixed the majority of issues on our vehicles from his 37 yrs of troubleshooting machines for an auto maker. Upgrading to 2016 and 2017 vehicles requiring computer diagnostics since retiring is frustrating. Your (George_San_Jose1) patience in explanation gives even me a good idea of the diagnostic process. I come from a Seabee Father who taught and required me to change points and plugs as well as oil and tires in order to get my license (dates me). Safety is ingrained in me and I am going to keep reading up on these bulletins in the event something else throws codes. I can’t thank you enough

Paul thanks you too. Blessings for your assistance

Well, it faulted again and Auto Zone read codes and same 2 codes. Got recommendation for a mechanic who is reputable and whose brother was on Rusty Wallace’s pit crew at NASCAR. So hubby is headed there to see if he can fix it. Will keep this thread updated.

I’m a little behind. Or lost. 2016 canyon with a TPS voltage code and what has been replaced already?

I like Rockauto for parts. I’d buy only AC Delco or Delphi. I’d probably replace the throttle body if I didn’t want to take it to a shop.

If I had that problem my-diyer-self, I’d use an oscilloscope to view the signals on the wire in question as the throttle position changed. If the 'scope didn’t due the trick, I’d use a logic analyzer. I don’t know if auto shops routinely have these types of instruments, and staff who know how to use them, that’s the problem. I think they prefer to use Tech-2 scan tools instead. Tech-2 scan tools provide a comprehensive set of diagnostic functions, but are very expensive, not diyer devices.

Oh no, yet another of George’s never ending stories … lol … many years ago I worked at a tech company, and my project was to figure out a way to incorporate another company’s tech circuitry to work with my company’s main product. The interface was similar to the one-wire TPS/ECM connection in your car. The software team just couldn’t get the communication to work, try as they might. The other company was in Boston, so I flew across the USA to Boston several times to try to figure it out there, but still no luck. (Boston was fun though!)

Finally I decided to try to resolve the problem using a new technique at the time, a logic analyzer. Usually I arrived about 10 am, but this day I came to work about 7 am to avoid the rest of the software crew who really didn’t like me doing their job; one of the software folk was already there, but he allowed me to proceed, smirking a little, as if to say." “George will never figure THIS out by himself!!” To his chagrin, using the logic analyzer method, I had it figured out in less than 20 minutes. The logic analyzer showed the series of ones and zero’s (bits) being transferred, but instead of all 16 bits, only the first 7 were there. 9 of the 16 bits were missing (technically set to zero) on that wire’s signal. Turned out the software had a big bug, it started the transfer ok, but then immediately reset the interface.

IMO the dealership’s approach is sound, albeit maybe a little cumbersome. Me, I’d probably not switch horses mid-stream, but as long as I was being treated politely and w/respect, I’d just let the dealership continue to work the problem. Hopefully in OP’s case, someone with a fresh look at the problem will solve it quickly.