There’s just far too many who lean toward buying all you need but not a single horse power more. 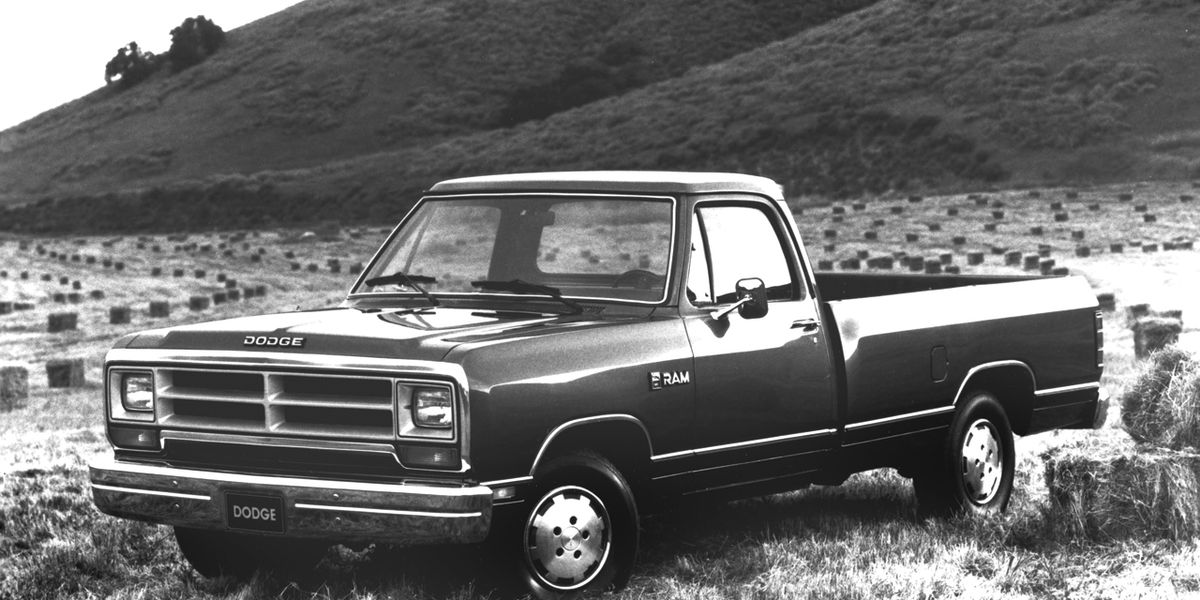 What Ever Happened to the Affordable Pickup Truck?

Or: The temptation of the overkill truck.

The trouble is that most people who buy a truck are, uh… Compensating for something.

They don’t need it to do any real work because if they did they’d object to the shoulder-height bed, and the luxurious interior that will be trashed by your dirty work clothes, and the satellite radio that you shouldn’t be listening to because you should be outside shoveling things into the bed that you don’t want to shovel things into because it’s lined with burled wood and bright stainless steel.

You see it in cars too - Put a new Civic next to one from the 80’s. It’s pretty ridiculous.

Great opinion piece. I can’t imagine why a successful,lawyer or doctor would anything less than the King Ranch or Denali.

In 1998 I bought a new Buick Regal LS. I went over to the finance office to finished the paperwork. There was a distraught working man there concerned that he HAD to buy a new $38,000 GMC truck because his old one didn’t run well anymore. He hadn’t even paid off the old one, but HAD to buy the new $38,000 one. The dealership was going to roll his old mortgage, um, auto loan into the new mortgage, um, loan. I was such a nice guy that I didn’t say anything, just kept nodding.

You can find a F150 or Chevy Silverado for $25,000 or so with discounts but it would only appeal to those wanting the basic work/fleet truck. Back in 2009 we were looking at used full size trucks and my autotrader search turned up a brand new leftover 2008 Dodge for $11,000 after rebates and discounts but the 3500lb tow rating for the V6 was a deal breaker.

I tried to buy a basic truck recently, things didn’t work out so good. I wanted a manual so at Toyota, you have to get 4wd if you want a manual. I went to GM using Costco’s program. They offered the employee discount which was $1700 OVER the MSRP and said it would be an 8 week wait AND there would be another transportation charge to bring it from a dealer 400 miles away.

Clearly the dealers do not want you to buy a basic truck. BTW, the clutch in the Toyota was worn out or defective somehow. No free play, engaged at the top and no friction zone, just grabbed. I’ve been driving clutched for over 50 years and I know a bad clutch when I see one, dealer did not accept my telling them. The sales man killed the engine every time he tried to use it and still told me it was fine. At least I could drive it. It was the only one in the area with a stick.

There are new trucks for sale for a around $20K. All mid sized. $28K for a Tradesman model Ram 1500. Good luck finding one. Dealers don’t stock them because people don’t buy them and they sure don’t lease them. 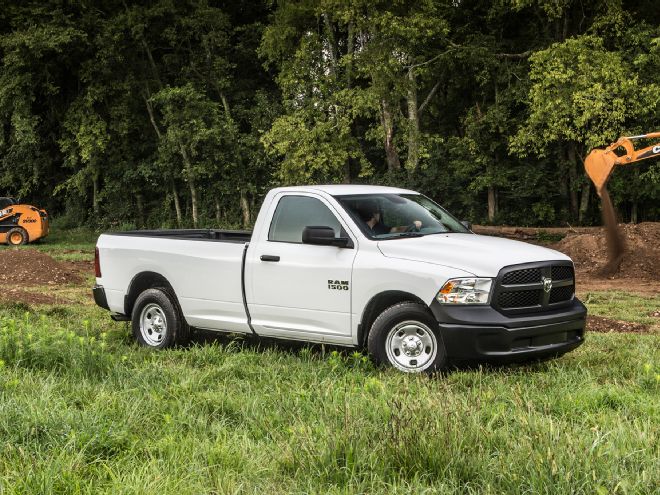 We round up the 10 cheapest new 2017 pickup trucks from each model line.

Since less than 4% of truck buyers buy manuals. Give it up. The manual trans is on life support and soon to be dead because NO one buys them anymore. It also means your New truck becomes un-saleable after your lease is up or when you want to trade it in because almost NO one can even drive a stick anymore let alone wants to.

Sorry. Even Corvettes only have 23 percent of buyers picking manual transmissions. Manuals are going away in the US and they aren’t coming back.

Hey, Get Off My Lawn!
Same as They Don’t Make a Cheap Pickup Anymore!
Old guy rants. The world has changed.

When I was young pickup trucks were basic, dirt-cheap, and intended for farmers and contractors. Somewhere over the years they began to be purchased to show off to the neighbors in suburbia, and the suburbanites began to demand lots of bells & whistles.
And then, the suburbanites began to want bigger and bigger trucks, bigger than the neighbors. Dodge Ram then created the “big truck look” and the race to bigger was on.

Yup. Because we old guys remember what pickup trucks used to be. And many of us miss it. So you can stop ranting about us old guys now.

Everyone likes improvements, but sometimes this “improved is better” thing can go too far. Just yesterday I heard on the news there’s a new law being considered in Calif that will force homeowners replacing a broken garage door opener to purchase a new one with a battery backup function. That’s so you can open the door by pushing a button if the electricity is off. The rational is that there were some people who couldn’t figure out how to open their garage doors b/c the electricity was out during a wild fire in the Napa area. So now everybody in Calif will eventually have to buy a garage door opener with battery backup.

And many define the word totally differently.
To me, today’s monstrosities called pickups are not improvements. The old versions in the days of the F100s did as much work as well as the monsters they’re making today. Yet the beds were much lower, the truck rode lower (much easier entry and egress), and the trucks IMHO had much better visibility for the driver. Their smaller size was easier to drive too.

But that’s MY opinion. Shared by many, but certainly not universal.

I think “no more manuals” bothers me more than the trucks…

I get no great satisfaction from owning a grand vehicle of any fashion. A vehicle is a costly necessity which robs me of discretionary income that I would prefer enjoying on a trip to the Caribbean or the Mediterranean or buying one of my grand kids a car that is popular to young people these days.

At my age after earning a living from automobiles in one manner or another for nearly 40 years cars and trucks are just semi comfortable transportation and the only status from the name is the reliability of the model that suits my needs. And the trend for grand models of cars and trucks is the result of marketing and cheap, easy financing along with the current low price of gasoline. When the APR on a new vehicle hits 6-8% and gasoline at $3.50+ a great many people will find their needs significantly reduced.

It gets decent fuel mileage and is not that difficult to get in and out of.

I get no great satisfaction from owning a grand vehicle of any fashion.

Me too… but only because I can’t afford a Bentley.

Pickup trucks began to lose their identity as work vehicles after WW II. Compare the 1946 Chevrolet with the “advanced design” 1947 Chevrolet, or the 1947 Ford with the 1948 Ford F-1, or the 1948 Studebaker with the 1949 Studebaker. You could also see big changes during this period in GMC, Dodge, and International. The change from work truck to a stylish vehicle to impress the neighbors was an evolutionary process. Trucks started moving the gear shift off the floor to the steering column after WW II. Ford and GMC then started offering automatic transmissions in 1953 and suddenly trucks lost the work truck identity. I remember when my dad and I rode in a new Ford F-1 pickup back in 1954. We couldn’t believe we were in a real truck. The truck we had on loan for a week back in 1949 was a 1939 GMC pickup. That was a real truck–floor shift, solid axle front suspension, crank open windshield, no passenger side wiper or sunvisor, etc. You have to go back aways to find real trucks.

This is a reasonable price for a modern truck, Toyota Camry starts at $24,500. Thirty years ago when a basic truck cost $10,000 a car could be bought for less.

Those who have been grumbling over the lack of low cost trucks for years just aren’t looking for a truck.

Me too… but only because I can’t afford a Bentley

LOL, cute, but I can only tremble at the thought of keeping an 18 year old Bentley running!
Besides, it isn’t a droptop.

But you raise an excellent point. A whole lot of people buy used luxury cars then are stunned when they find out how much it costs to insure them and keep them on the road.
Me? If I can’t afford a new one, I figure I can’t afford an old one either.

Those who have been grumbling over the lack of low cost trucks for years just aren’t looking for a truck.

Probably just looking at local dealerships rather than doing an online search or deciding on building one to spec and waiting.

You see it in cars too - Put a new Civic next to one from the 80’s. It’s pretty ridiculous.

In some of places it seems as though the bigger the vehicles get, the smaller the parking spaces get.

Be sure to pay attention to what is on Ford lots when the APR gets to 6% and gasoline approaches $4.

I seem to remember seeing an ad in the newspaper back in 1954 for brand new International Harvester pickup trucks priced about $1300. This was less than the price for s new Ford Mainline or Chevy 150.
As far as luxury vehicles are concerned, Tom McCahill in his book “What You Should Know About Cars” published in the early 1960s noted that he had a friend who bought a new VW Beetle and another friend that bought a new Cadillac. Four years later, the VW and Cadillac were worth the same amount of money, even though the Cadillac cost at least two and a half times more as a new vehicle. One pays in many ways for luxury.