These Gross Polluting Illegally Modified Diesel Trucks Are Out Of Hand

This is getting ridiculous, i was hoping that when diesel hit 5.00 a gallon these people whp drive these tampered with diesel pickups with tow mirrors amd big exhaust pipes that belch black smoke would slow down a bit.

Maybe diesel needs to be 5.00 a gallon for everyone except these illegal vehicles. Maybe it should be 20 a gallon for them smd maybe…just maybe they would quit roaring thier engines and blowing raw doesel fuel.out of the exhaust.

I got stuck behind one of these clowns today and the stench gave me a headache. The only reason the law breaker was going the dpeed limit was because he was stuck behind a convoy of semi trucks, speed limit was 55 and normally these guys would be running 70 to 80 and i would get some clean air.

Unfortunately in the State i am a prisoner of, its unlikely to change.

I also think it’s beyond silly for folks to be driving around “heavy duty” pickup trucks, designed for doing actual work, back and forth between points A and B. Burning premium fuel with all sort of “accessories” for no real reason, aside from appearances.

Well right after I posted this I got stuck behind a late 90s /early 2000s explorer burning an obscene amount of oil. At least they didn’t spend money for that “feature” and no laws were broken.

There’s a price to pay for those making the mods. 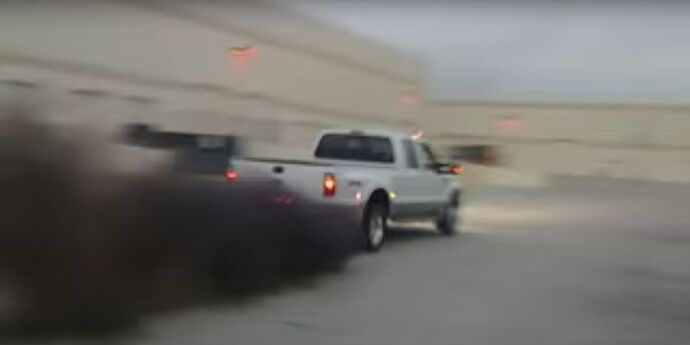 The DOJ hit the founder of Spartan Diesel Technologies with one year and one day behind bars for selling emission defeat devices. That's on top of two million-dollar fines.

Yup!
Several years ago, I had a neighbor whose daily driver was a dual-wheel pickup.
No, he wasn’t a tradesman of any type, and he never seemed to haul anything in that stupidly-wide machine.
I think the appropriate term is… compensation.

in the State i am a prisoner of,

They don’t seem as common around here as they once were but are still annoying when you see one. Of course these are tuned to do this on purpose which is completely stupid.

I always get a kick out of seeing one blow up while blowing smoke. I have seen this happen twice where they were really getting on it and blowing a huge smokescreen, only to hear something let go. Then the smoke starts pouring out from under the hood and I keep driving.

There is a guy around here that collects the horrid GM diesels. It all started when his grandma gave him her blown up Cadillac or whatever for his 16th birthday and he fixed it with studs and such. Then he started buying more of these things and fixing them. He says they burn anything like used cooking oil and get like 40+mpg but that the acceleration is glacial.

Anyway, he was driving along in a grandma car and some big truck started blasting him with black smoke. So he pulled up alongside the truck, put the diesel Cadillac in neutral, and floored it! Basically he was rolling coal and getting back at the guy in the big truck in a grandma car. He said the guy in the truck looked completely shocked and amazed that this car was rolling coal just like his truck.

but that the acceleration is glacial.

Even brand new the 0-60 times for those GM diesels were measured with a calendar.

I’m an old fart but frankly the idea of blowing out partially burned $5 gallon fuel is beyond me.

Yeah, we all hate tickets, “government interference” and love fredom but laws are what prevent the morons from taking over.

It’s simple common courtesy, you can’t sht on my lawn and your car can’t sht in front of my car.

I got stuck behind one of these clowns today and the stench gave me a headache.

Do they remove some kind of exhaust filtering system? I thought those diesels ran normally when they weren’t near full throttle. At 55 MPH it shouldn’t have been anywhere near full.

What state are you in that won’t let you move out? I am a content resident of Erie County , NY. I like our 4 seasons, enjoy driving in the snow. Enjoy the friendlier people in the emptier end of our state.

I would like it if our taxes were lower, but , enjoy our services and they give seniors a lot of tax breaks. Star and enhanced Star programs for property taxes, no state income tax on Social Security and they exempt $20,000 of pension or retirement income for each person from state income tax.

Do they remove some kind of exhaust filtering system? I thought those diesels ran normally when they weren’t near full throttle. At 55 MPH it shouldn’t have been anywhere near full.

It wasn’t blowing black smoke the whole time, but it still smelled like raw diesel while following it. Terrible

What state are you in that won’t let you move out? I am a content resident of Erie County , NY. I like our 4 seasons, enjoy driving in the snow. Enjoy the friendlier people in the emptier end of our state.

Of course I am not literally a prisoner here in Indiana, however moving is not practical right now for different reasons.

It doesn’t matter where you live anymore. Ever since the Covid shutdowns, drivers have turned the sociopathic jackassery up to 11. Rolling coal, triple digit speeds, street racing, it’s all increased markedly. Where I live, evenings used to be pretty quiet. Now it sounds like a racetrack almost every night, and a lot of the noise is coming from the lifted brodozers.

And none of them seem to care about wasting fuel, despite spending a lot of time running around blaming the government for “causing” high gas prices.

none of them seem to care about wasting fuel, despite spending a lot of time running around blaming the government for “causing” high gas prices.

+1
It seems–at least in my area–that the folks complaining the loudest (either verbally or via bumper stickers) about gas prices are the same ones who waste an incredible amount of gas by idling their engines while sitting in parking lots, who think that the gas and brake pedals are binary all-on/all-off switches, and by engaging in a pseudo drag race every time the light turns green.

Basically the owners do two things from what I understand. They buy aftermarket programmers/chips to override the factory settings which are EPA compliant. It appears these programmers do TWO things. One, they put WAY too much fuel into the mix. Two, they seem set the shift points on the transmission too early so the engine lugs, blowing even more smoke.

I think some of these are able to be turned on at will to blow smoke as desired and then back off to run normally as well.

A friend of mine once bought one of these trucks and it had the programmer installed when he got it. I seem to recall it having like 6 different settings. Basically he said there were some practical uses and that you could set a leaner mix if not pulling and get better mileage. There was also a setting for towing. I am not sure what the advertised purpose was for the “roll coal” setting but it had that one as well. He only did it when I was behind him of course!

Several years ago, I had a neighbor whose daily driver was a dual-wheel pickup.
No, he wasn’t a tradesman of any type, and he never seemed to haul anything in that stupidly-wide machine.

I have a neighbor just like that. These trucks are so wide they think they can use part of my lane when they are in the oncoming lane. He was coming up on a cyclist and he moved over toward me. I gave him a quick toot. I had to move to the right to keep from hitting his left rear wheels/fender.

I remember one of my friends telling me about an old neighbor of his that used to own one of these trucks. The guy would just start it up and floor it in his driveway, just blowing smoke for fun or show. The truck was also very loud so woke people up when it was done very early or late as it often was.

My friend was getting so annoyed that he was actually considering sabotaging this truck. Luckily for him it didn’t have to come to that. One day the guy was out in his driveway just revving the engine, making all kinds of noise, and leaving a thick black cloud of course. It was roaring like normal when suddenly there was a loud bang like a shotgun, then the engine clattered to a stop with the sound of breaking metal. He looked out the window and could see a pool of oil all over the ground.

The truck sat there for quite a while in its pool of oil and pieces of connecting rod, the block, or whatever. One day he came home from work and the truck was gone, never to return. He moved soon after that so he doesn’t know if the truck was replaced but at least he had several months of peace before he moved to a new location.

I am sure a lot of these modifications are not well thought through so overstress other systems as well. One of the reasons another friend sold his truck with the programmer installed from a previous owner was the fact that the transmission hadn’t been redone to handle the extra power from the programmer. He figured that was the next weak link and he didn’t want to have to deal with it when it let go.

My grandmother would have called that guy a “Cool Fool”…

Let’s also not forget the tale, from some years back, of the guy who had a brand new Ford Super Duty truck, which he “reprogrammed”. The engine blew up or had some sort of serious damage, the Ford dealer (rightly) blamed the “reprogramming” and voided the warranty for the engine. So the guy had a nearly new Super Duty truck with a junk engine, all of his own doing.