Absolutely brilliant! Though not street legal, they could be sold in the Florida and Arizona senior’s communities where golf carts are a primary source of transportation. If a deal could be made to ship them in bulk at a better price, this could be a highly profitable business. Working with the manufacturer, a less elaborate paint without the Chinese tags and potentially offering a selection of colors could result in an excellent business venture.

I’ve been living in China for the last 10 years.

Now your “handle” makes sense to me.
I visited Xian, Beijing and Shanghai in 2008. 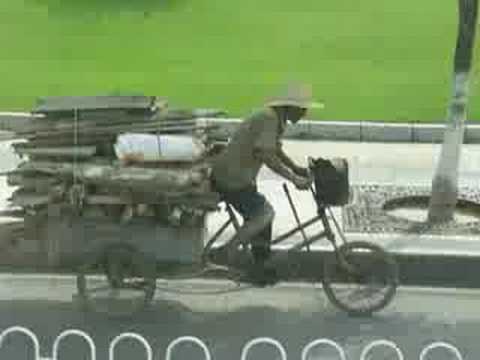 Yes, and the chunky part was a result of those buffet style college dining hall food. I never slimmed down even after cardio and weigh training.

That video was 95% accurate when I moved first moved to China. The other 5% would be the professionals riding relatively expensive mountain bikes with hydro disc brakes. By the time I left for a new job in Hong Kong, many have moved on from electric bikes to cars

Back to this topic, I would get one of these if I’m to buy an electric car in China. 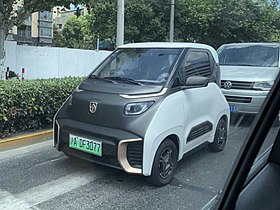 The Baojun E200 is an electric two-seater microcar, with two doors and a hatch at the rear, and a design similar to a Smart electric drive car and is the second vehicle in Baojun's electric microcar series, after the E100 and before the E300. Baojun, in a General Motors-Chinese joint venture known as SAIC-GM-Wuling, commenced production on the model in September 2018. It is the second Baojun electric car. The remote interactive system in the E200 provides users information on charging and parki...

Yes, and the chunky part was a result of those buffet style college dining hall food. I never slimmed down even after cardio and weigh training.

I slimmed down the last several months . . . about 30lbs less than last year . . . because I wanted to head off some problems

And then my back was giving me more problems than usual . . . so I had to start doing back therapy. Twice weekly back therapy, plus daily exercises at home

But I’m not rubbing it in or saying I’m stronger or more agile than somebody decades younger than me, unlike a braggart who hasn’t been active on this website for at least a month, I’d say

I won’t mention his screen name, because you all probably know who I’m referring to . . .

All I know is that this exercise, therapy and improved diet has helped me

All I know is that this exercise, therapy and improved diet has helped me

Good for you . All I can add is that I have done about the same thing and I strive to make sure that I never miss more than 2 days of exercise .

Exercise is a tricky subject nowadays, because of the virus

But I can still do my back therapy exercises at home, which are for strengthening/maintaining my core, plus I can go on walks several times a week. I’ve started wearing light ankle weights . . . 3lbs . . . on those walks lately, just to see if I can do it. So far, so good

I have my scheduled physical next Friday. Hopefully the doctor will agree I’m in decent shape. And if not, I want to know what to work on

It’ll probably be a few days after the physical . . .

The doctor’s staff usually calls a few days later to say if all the bloodwork, cholesterol, weight, etc. is fine, or if anything is not up to snuff

The doctor himself is a model of health . . . slim and active . . . and he’s old enough to be my dad. A little hard to measure up to him, but I can try, within reason

I know what you’re talking about. I dropped 60lbs at one point. But I wouldn’t call myself slim by any means. What I lost in fat, I gained in muscle mass.

I’m ok with not being slim. Like you said, I can physically do things that I could not. When I was in China commuting on my mountain bike, I could keep up or even pass people on electric scooters.

In Hong Kong, I used to walk to work because it was faster than taking the bus. But since this outbreak, I’ve been assigned to another location to minimize contact between colleagues and that’s too far to walk to. I wish they build bike lanes here just like they do in London; I’d love to get back on a bike

Is it reasonably safe to ride a bike to work in China? . . . please forgive my ignorance, as I’ve never been there

I’d say it is somewhat safer than it used to be. Back then, pedestrians and cyclists were regarded as a lower form of lives by 4 wheel cagers, even if you are riding something with a carbon frame, because cars were a status symbol. As more and more people own cars and many of whom were former cyclists, people are more courteous toward each other

I used to work in a manufacturing hub with a lot of foreigners visiting factories. With all that tax revenue, the government had been building bike lanes (mostly because the city government wants to use up its allotted budget)and they were great to ride on. As soon as I rode out of the city and into the suburb where i lived, the roads were poorly maintained and you’d want mountain bike tires and suspension.

Overall, I’d say riding a bicycle is not terribly dangerous. Just ride as others do unless your instincts is telling you to step back as others are riding somewhere or doing something too dangerous.

unlike a braggart who hasn’t been active on this website for at least a month, I’d say

Hopefully the hurricane will stay on the east side so he should be OK but I think we should be careful not to chase away any more posters whether we agree with everything or not. Or maybe you were talking about that other guy that is smack dab in the middle of the storm.

Just curious… is CarTalk access allowed from internet China or did you need a VPN to do so?

Seems to be throttled back a little. But it is still allowed as we don’t get into any sensitive issues. I haven’t been back in a long time, but us Yahoo news was allowed

Didn’t you live in Alaska when you first started posting here? I recall that you drive a Corolla at the time.

Back to the car. It has a 1.1 HP DC motor. I was watching a car show this past weekend, and there was a product placement for car vacuums and blowers (driers). This manufacturer offers a 4 HP unit. Buy one of those blowers, replace the 1.1 HP motor with the 4 HP unit, and you’d have a fire breathing dragon. Relatively speaking, of course.

Unfortunately vacuum cleaner makers grossly exaggerate motor power.
Anything over 2.4hp would trip a 120V 15A breaker, and that’s input power to the motor, not output.

Seems similar to the claims made by the jump pack manufacturers with the amps. Nebulous claims with little basis in reality.

Everything is in the normal range this time

There is a way to graph yesterday’s results, versus the results from last time, and you can see an improvement in certain areas

Weight is down since last time, as was BMI. I’m not going to bore you with all the various numbers, though

Last time they didn’t provide the results of resting pulse . . . at least not on the website . . . but this time it was 52. So I know the exercise, therapy and improved diet is paying off. I know for a fact that my resting pulse was either 59 or 60 for many years. So this is an obvious improvement, as far as I’m concerned

But unlike some other guys, I’m not going to brag. I’m simply glad things are normal. Nothing to fret about this time

In any case, things that used to tire me out at work aren’t really a problem at this time. Busting tires used to really beat me up. That hasn’t given me any problems lately. I suspect it’s because the back therapy . . . which is mostly core exercises, so to speak . . . is working. But I have to do exercises even on the days I don’t go to therapy, and I’m trying to follow the rules. Seems like it’s working.

There’s a guy at work that is literally a generation older than me. I’m 48, and he’s clearly in his 60s. I don’t need to ask, I can see it. But he’s kind of a role model, because he’s slim . . . but not skinny . . . and obviously in great shape. He’s the oldest guy working in this particular shop, but he keeps up with all the other guys. He’s doing the job, and with no complaints. He seems to be careful and doesn’t do anything to get himself hurt. That’s probably why he’s still wrenching, I figure. I know more than a few guys much younger than him who have lots of physical problems, and many or most of them are due to lifestyle choices, without getting too specific.

I was expecting the doctor to agree that this is a very cheap car.