The truck and the tornado

In case you haven’t seen the video of the red Chevy pickup being tossed around by a Texas tornado, and then being driven away, here is an article about that incident, as well as the very happy ending for the teen driver.

My guess is that the Chevy dealership is going to get a LOT of showroom traffic by being able to display the truck that “took a licking and kept on ticking”… as they used to say in an old Timex ad. 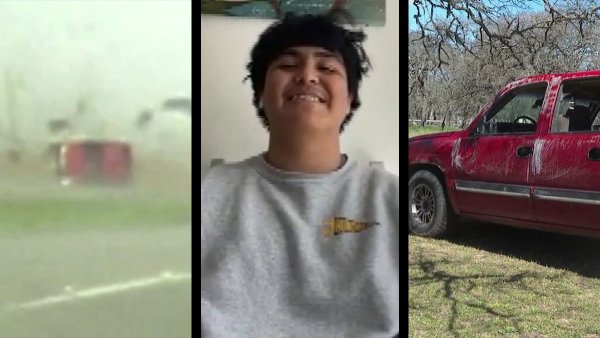 The driver of a red pickup truck seen in a widely-circulated video flipping over on Highway 290 during a tornado in Elgin will soon be cruising town in a brand new red Chevy truck.

Grandfather got turned around by a tornado in Texas 80 years ago - just another day at work for him. Isn’t video great?

Thanks. I only saw a portion of that before. “Seat belt on son, hands on the wheel, cell phone down?” Hang on.

That’s great he’ll get a new truck. If they advertise it like said, they can write it off as advertising expense. Sounds like they are good guys.

My sister was in a tornado once in her house. Like a dozen freight trains. They moved to Kansas.

That seat upholstery is likely ruined… First the kid SAID it… then the kid DID it… Then the kid drove away and changed his pants!

An idea for a new ride at the fair. I think tornado is already used though.

According to Jalopnik the new truck is from Chevy itself with another $50,000 going to relief efforts from the storm.

Chevrolet Donates New Truck To Teenager Who Drove Through Tornado

According to Jalopnik the new truck is from Chevy itself with another $50,000 going to relief efforts from the storm.

Well, then GM can use this truck to advertise that their vehicles “can really stand up to abuse”… or something to that effect. Good on them, as they say in England.

As much as I’ve come to dislike GM lately, somebody there made a good move and to donate the money so fast. I would suspect though as part of the deal, the kid had to sign away any rights to the truck or video so they could use it any way they want. Of course you can’t contract with a 16 year old so they’ll have to deal with his parents or someone.

sorry to hear his back was fractured in multiple locations

Pretty sure that’s not the case. Just saw him on the morning news, he’s fine.

Pretty sure that’s not the case. Just saw him on the morning news, he’s fine.

+1
I really doubt that this fully-ambulatory young man suffered multiple spinal fractures.
In fact, he appears to have escaped relatively unscathed. 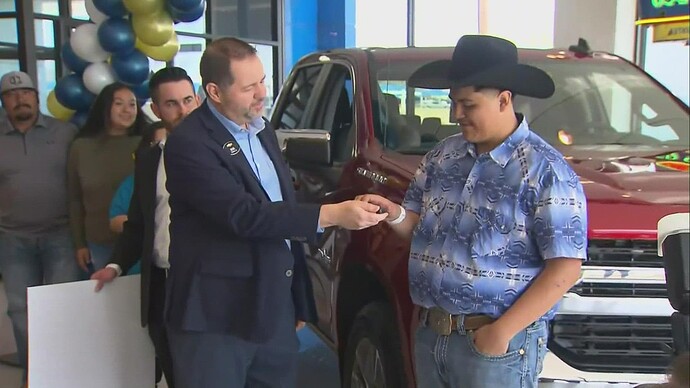 He does not look too injured? I still like to interview him.

I like his hat, but gol dang it, does no one take their hat off inside anymore? Or while eating? True, it’s not like you can put it in your pocket or hang it on your belt. Still. “Here’s your keys son, but take your hat off for the cameras.”

What about other people whose vehicles were damaged by storms?

Unless their stories go viral, they are definitely NOT getting a new truck plus checks plus the money from the crowdfunding

What about other people whose vehicles were damaged by storms?
Unless their stories go viral, they are definitely NOT getting a new truck plus checks plus the money from the crowdfunding

Of course, but I think you will have to agree that the phenomenon of the truck being flipped, then landing back on its wheels and being driven away under its own power is fairly unique. Modern society is filled with surveillance cameras and people using their smartphones to “video” various events. When those recordings are broadcast on TV news, the object of the recording becomes instantly famous (or, in many cases, notorious…

If similarly remarkable videos about other storm victims had been broadcast, they might have reaped a similar reward.

This kid was filmed having his car flipped by a storm and he gets a new truck, 2 checks and the money for the crowdfunding . . . which might be used to pay for some college costs

Another person gets a bad break , isn’t filmed and gets NO money from strangers

I give money to animal charities every year . . . quite a bit, in fact

And I’ll gladly continue to do that . . . instead of paying towards crowd funding for that guy with the truck

I also contribute to animal charities–as well as a bunch of other organizations–and I NEVER contribute to Go Fund Me, or any other crowd-funding effort. However, I don’t begrudge this kid what he received. He didn’t ask to be in the midst of a tornado, he didn’t ask for his truck to be heavily damaged, he didn’t ask anyone to do a video recording of his experience, and he wasn’t the person who submitted the video to a TV station or two.

I still maintain that others in a similarly remarkable situation could have lucked-out with similar benefits IF they had been recorded. He was recorded, and others apparently weren’t. He got lucky–in a sense–and others might not have gotten lucky. It’s just that simple. Life isn’t always fair, but I don’t begrudge this kid the goodies that he got.

I think folks are just happy to have a rare piece of ‘good news’ on the TV.

What about other people whose vehicles were damaged by storms?

You can’t give a new truck to everyone, but you can to one who had a wild ride. This is just classified under the heading of life is not fair. Like when the neighbor got a raise but I didn’t.