A dealership does something really nice!

All too often, we like to “dump” on dealerships, and in order to keep things in perspective, I offer this bit of positive news.
While I have no doubt that the dealership did this good deed more for its positive PR effect than anything else, it still resulted in a literal God-send for this handicapped man and his wife: 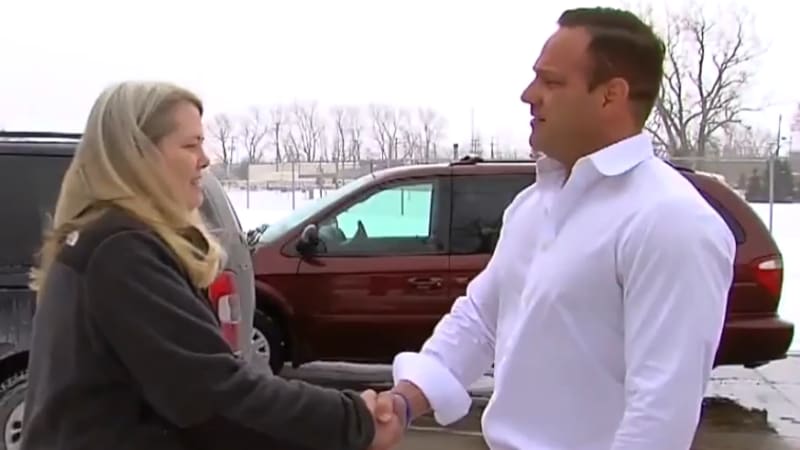 A Michigan couple who were swindled out of a new minivan by a Craigslist scammer got a happy ending this week in the form of a replacement, free of charge, from a local car dealership.

Way to go Rightway Automotive. That’s for the cheer-up this morning, @VDCdriver.

Thanks @VDCdriver for posting that.

Kudos to Rightway and I hope they have a great year of sales.

Those are some good people, that donated the van

Now as for that thief, he deserves a savage beating, before doing jail time

Sounds like something that recently got resolved in Austin. A woman’s son needed a handicap van that was damaged in an accident. An unscrupulous body shop collected her $15k insurance money and didn’t repair or return her vehicle for almost a year. A lawyer and some other folks finally stepped in and got the van, got it repaired, and are suing the shop.

Good story. I wonder if there is a way to trace who originated the ad?

Really nice of the dealership, cynical me thinking a 2500 write off for a wholesale car they might get 750 for. But there are a lot of people that need help every day in every way, and It is a good thing at the end of the day.

I hope the scammer from CL gets caught and hung in the town square. I’ll buy the rope.

I’m usually the odd man out but the cynic in me wonders if the dealer benevolence would exist if the photo op PR and free advertising on the local news had not existed. I tend to think that if someone had approached that dealer about providing a car to the couple free of charge and the news was not involved the outcome may have been different; maybe as in “get bent…”.

I’m certainly glad to see the couple ended up with a vehicle though.

Fred Flintstone, Here. I Can’t Watch These Fancy Store-Bought Videos, Sigh… (Won’t Download Or “Stream” Or Whatever… Soon I Should Have Access To Broadband, Though.)

I get the gist of the story. Our local law enforcement agencies have been on TV inviting people to meet with and consummate craigslist deals in their lot. This might not solve the rip-off problem, but can’t hurt.

“Now as for that thief, he deserves a savage beating, before doing jail time”

“I hope the scammer from CL gets caught and hung in the town square. I’ll buy the rope.”

Count me in…either way.
If I can’t contribute to the rope fund, I will gladly take part in that beat-down.

“Fred Flintstone, Here. I Can’t Watch These Fancy Store-Bought Videos, Sigh… (Won’t Download Or “Stream” Or Whatever… Soon I Should Have Access To Broadband, Though.)”

Yeah I hear ya. I finally had to dump my 3 year old pos computer for non-performance. Wouldn’t even load videos at the end. Much happier now. I have broadband but slow so as soon as the weather allows stringing some attic wire I’m going to convert to cable. I picked up a refurbished HP pretty reasonable and got a new computer guy that is retired Air Force and pretty good.

One of the startups I worked for…we bought 5 1yo servers on craigslist. Met the guy in a wallmart parking lot with $10k cash. Took a big chance…but it was worth it. New - those servers were $10k each.