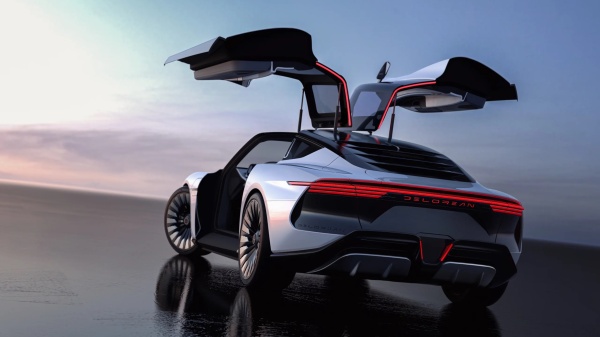 DeLorean said the Alpha 5 EV sports car will go 0 to 60 mph in just under three seconds, have a top speed of 155 mph and travel 300+ miles on a full charge.

Other than the dopey wheels it looks nice .

Great - one more EV using up our limited resources to yield useless performance figures at a high price. This (along with EV Hummers, etc) is making the environment WORSE, not BETTER.

EVs only help if they are used a LOT, that’s needed to get over the large up-front CO2 cost of creating the batteries. So the EV needs to be the primary car, not the weekend ‘fun’ car.

Why can’t the Alpha 5 be a daily driver? Most commutes could fit within the 300 mile range. Not everyone could drive it every day, but someone that can afford it probably has safe parking to protect it.

The Hummer EV is a transition vehicle to the Silverado EV. They are built on the same chassis. IMO it makes sense to bring out a vehicle with limited appeal before courting the main pickup market. This allows the manufacturer to annoy fewer customers before going big. It seems to me that Chrysler made that mistake with the PHEV Pacifica. You may recall that the software turned on the fuel injection far enough in advance of cylinder activation that raw gas was pumped into the exhaust where it ignited in front of and sometimes inside the catalytic converter. Not even 5 years later and they don’t build them anymore.

I tend to agree with Texas , Fully electric vehicles need to be more mainstream and why does a 3 second to 60 need to be a selling point .

Why can’t the Alpha 5 be a daily driver?

It could be, but probably won’t be for most people. Kind of like a new Corvette. I imagine this thing is going to be pretty pricey.

How much cheaper and lighter would this car be if the base trim model went 0-60 in 8 seconds?
Not everyone wants the ability to drive like a maniac (New Englanders execpted

Thanks. I said that too.

How much cheaper and lighter would this car be if the base trim model went 0-60 in 8 seconds?

I doubt it affects the price much. They could use a smaller traction motor and controller. Doing that would also reduce the efficiency of the motor during normal driving, and reduce range. With electric motors, there is a duty cycle along with the power. It may be able to put out the full power needed go from 0 to 60 in 3 seconds for a maximum of 30 seconds before it overheats.

This allows the manufacturer to annoy fewer customers before going big.

Yes getting things right before they go big, and also to make sure some parts don’t last too much longer than the design life of the vehicle. Figuring out how to get the AC condenser radiator to fail at 150k miles, and the driver seat to get a hole in it at the right time, and stuff like that needs testing!

With electric motors, there is a duty cycle along with the power. It may be able to put out the full power needed go from 0 to 60 in 3 seconds for a maximum of 30 seconds before it overheats.

Probably a lot less than 30 seconds. The Mustang MachE GT performance version is super quick to 60, but has disappointed testers on the way to the 1/4 mile because it backs off the power.

Is the flux capacitor covered by the warranty?