It’s been a couple decades since I last did rear brakes, so first time for this newly acquired ride. Thankfully, it seemed a bit simpler, given some allowance for the learning curve. But my memory is faint about adjustment.

I didn’t see a slot for turning the star wheel, so it took a few trials of removing the drum, adjusting, and replacing the drum to get closer. Thankfully, the drums came right off. I adjusted to the point where the new shoes were too wide to get the drums on, then I backed off a bit. At that point I could hear and feel some drag when spinning the drum.

Then with the parking brake applied, I confirmed that I could not turn the drum, so I thought I had that right too, but evidently not: Testing with wheels back on the ground, the parking brake did nothing to stop the car from rolling on the small slope in my driveway.

I’m assuming I just need to adjust the parking brake cable. Am I correct?

Parking brake cables do stretch, and most have an adjustment.

It’s sort of a fine art, getting it right the first time.

There should be an access hole on the front of the rotor, leading into the drum(it’s possible to install the rotor in a way that the wheel hub will be in the way of the adjustment hole). The stock rotor will come with a rubber plug in the hole that you transfer to a new rotor, should you switch them.

What you’re looking for is to get it tightened to the point that you cannot turn it anymore(off the ground), then back off maybe 1/4 to 1/2 turn on the adjuster. This should allow free movement(although dragging) of the rotor. You sort of need to hit a sweet spot of not too much drag and enough drag that the cables pull tight.

Stock acceptable “pedal clicking” is 3-5 clicks @ full tension. If you’re beyond that, you’re adjusted wrong either inside the drum or at the pedal. The pedal is adjustable, but you have to pull all the trim off in the kick panel.

Drum parking brakes hold better when the car is headed downhill. The front pointed uphill is more difficult for it. I have a pedal that operates the parking brake on my Dodge Caravan that holds well both ways. If you have the “T” handle that ratchets when you pull it out, that doesn’t work very well. If you pull up on a hinged handle, there may be an adjuster right on it so good luck.

Mine is also a pedal. And my roll- test was going forward down the slope. I’ll look for a cable adjustment tomorrow.

What I’m hoping for is to clarify my understanding about the adjustments. It has always seemed to me that using sound and feel when spinning the drum to judge the shoe adjustment was the only real way to know if I’m in the ballpark. Mostly I’ve relied on “drag” to guide me, since it seems there’s always noise regardless of how the shoes are adjusted. At least that’s my very limited experience. So I’ve just had to rely on the self adjusters to fine tune the adjustment I did.

Just so I’m clear, this is the rear disc brake with the internal parking drum brake, right? I think you’ve done the initial adjustment correctly, now you need to take out some of the slack in the parking cable part of the system.

Thanks everyone for your replies.

To clear up confusion, this is an older Sienna, 1999, so DRUM brakes on the rear. That’s why my question stated “drum brake”.

OK, then there should be some way to access the adjuster with the drum on. Perhaps a ‘knock out’ pre-punched area in either the backing plate or drum that wasn’t removed. Once on, then I adjust until the wheel stops after about one revolution (with wheel/tire on, that is).

then I adjust until the wheel stops after about one revolution (with wheel/tire on, that is).

There is a round window in the drum - on the wheel side - for adjustment, but the drum was so easy to get off, it was simple to do that and easier to move the star wheel. The last vehicle on which I remember doing brake work had a window on the backing plate so the adjuster could be accessed with the wheel/tire still in place.

I think my main question has become clear: - that the parking brake cable is a separate adjustment. If I had thought more about that before posting, I probably would have realized that!

I appreciate the replies. Now I’m off for my first road trip since the eclipse last summer!

When you get it close, you just put it all back together and then with your foot OFF the brake pedal, activate and release the parking brake 6 or 8 times. You should feel it tighten up after a couple of cycles. If it doesn’t, then the cable needs adjustment. 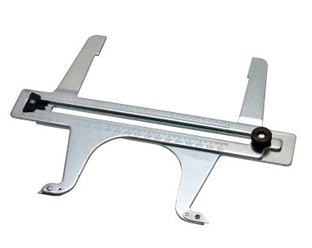 You adjust the tool to the inside of the drum, then adjust the shoes out until they come in contact with tool.

If you don’t have this tool, you adjust the shoes out so the drum slightly drags on the shoes when it’s installed. Then once the drum brakes are installed, you back the vehicle up while pumping the brakes.

This will cause the star wheel adjuster to automatically adjust the shoes out to the drums.

Thanks @keith. I had tried the parking brake as you say, but with no success. From what you say, that was because the cable adjustment isn’t close enough. I appreciate the detail you provided. I’m confident now that I’ll solve the problem when I get out to the car and find the cable adjuster.

Good info. Thanks @Tester. I’ll be working on the car shortly.

Yeah, the last drums I did was on the rear of my 86 Park Ave. There was no slot (just the knockout) but the book called for using the device Tester showed. I used a large caliper but that’s the last time I’ve done drum brakes, broke my spring tool, and don’t ever intend to own a car without disc brakes all around.

@bing
I guess I’ll get there sometime (to 4 wheel discs). Mostly I get such good deals on older cars that it’s a cost effective strategy. And it’s what my budget allows!

This Sienna is a good case: I had watched Craigslist for a Sienna of this vintage for a couple weeks, they were priced at $2500 - $3500. Then I spotted this one, for $1600. Turned out it was a (sketchy) dealer situation, not a private sale. The odometer was not working but the car did not need body work, and ran fine. I offered $1400, they accepted, probably out of concern about the unknown mileage.

Then found out that my out-the-door price was $1400, meaning that it included the sales tax and DMV fee. Score. Later my mechanic checked it out. He found that parts replaced recently included transmission, radiator, timing belt. So I saved at least $800 just on the timing belt job which was essential given that the actual mileage was unknown. In 2 1/2 years, I’ve spent about $350 for front end work that was due, and $10 for a new door handle. I’m even still running two of the tires!

Before that, I had bought my third Grand Caravan, this one a '96, that had been parked for 5 years. Seller asked $200. It started right up with a jump. That lasted 4 years until a head gasket began to be questionable - the van was not worth the price of repair. And there’s a bonus: the seller has become one of my best friends!