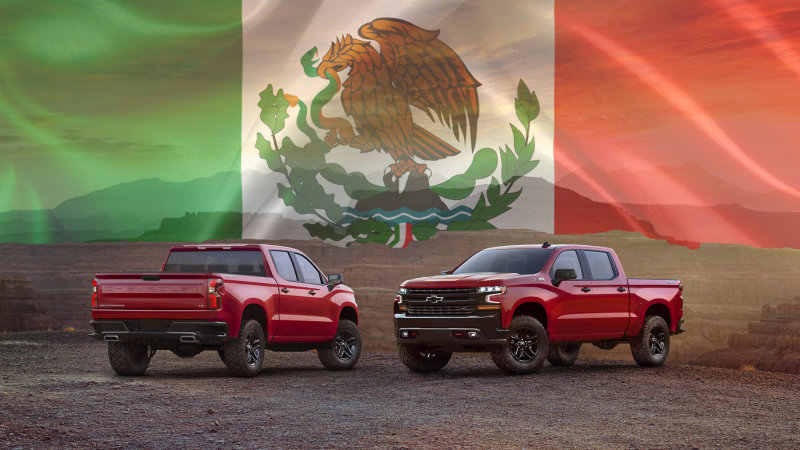 If Mexico tariffs happen, here's a list of the hardest-hit cars

President's threat looks more real by the day; its effects would be widespread

Pretty clear evidence that all taxes are paid by the consumer and not by the corporation. Trickle-down works for taxation.

Good thing I don’t want any of the car’s listed. My 04 Chevy truck has a Mexican engine in a Canadian assembled body. The US was just a pass-through.

And here we go again with peoples financial well being made worse by a business man who has not a clue.

I wonder if this is an effort to pay for the most recent federal tax cuts without calling it a tax rise. If everything made outside the USA is taxed, um, has tariffs levied, it will mean billions of additional money in the Department of Treasury coffers. So we’re beat down two ways: increased taxes for most citizens from the latest tax “cut” and increased taxes, called tariffs, in this round. I’m so disillusioned.

Yet there are many delusional voters who think it’s actually good. I know a few who think this tax is being paid for by Mexico (because Fox News said it was). They haven’t a clue.

I was critical of U.S. industry shifting to China in the 70s and later in Mexico my opinion was usually countered with all manner of partisan/anti union rants and now that we have allowed such a cozy relationship with cheap Asian and Latin American labor to develop the worst possible solution is being slammed into the economy of all countries involved. Talk about STOOPID.

And to add insult to injury US deficits are being heaped higher and higher by pouring ‘free liquidity’ into the investment banks that allow near zero and zero interest money to finance cars including cars made everywhere in the world. We have a grand tradition of sending geniuses to Washington to bury US in debt and poverty wages.

To his credit, Fox’s Chris Wallace did get WH Advisor Larry Kudlow to admit that this is really a tax on imports, paid by US corporations and almost always passed along to consumers in the form of higher prices. It took a lot of tooth-pulling on Wallace’s part, but Kudlow–eventually–had to admit the reality that this is nothing less than an additional tax on US consumers.

… and the so-called “tax cuts” are also adding an incredible amount to the federal deficit. I paid over $2,000 more in federal taxes for 2018, but the massive tax cuts for corporations and “the 1%” have just served to make the deficit much bigger than it was a year earlier.

It’s really difficult to get critical, objective news these days. It amazes me that BBC and PBS are as close as I can find to the truth. Of course there’s the late night television court jesters.

Many a truth is spoken in jest - by those with a sense of humor and an appreciation of the absurd!

Speaking of PBS, they are presenting a nightly review of segments of the Meuller Report because they don’t think many people will read the entire report. So far, they seem to keep to the report without editorializing. This is on the PBS News Hour. BTW, their review will be of the entire report, it is just broken up into 5 to 10 minute segments.

I intend to watch that @jtsanders.

Currently the political conflict in this country is as idiotic as the fanatic fight between Ford and Mercury automobiles 60 years ago concerning which had superior quality. No one wanted to know the facts. Facts would interfere with their fantasies.

I was critical of U.S. industry shifting to China in the 70s and later in Mexico my opinion

Not it wasn’t. There were MANY out of work manufacturing workers who went on welfare because of those job shifts. It really hurt our economy. This shift of workers led to the shift of how the US reports on the economy. Prior to the 70’s most economists based how well the economy was doing based on the Jobs and wages. That shifted after the 70’s to corporate profits. As time has proven they can be direct opposites. In fact GE’s Jack Welch wrote in his book that to maximize profits you need to move the labor-force off-shore and upper management here in the states.

To his credit, Fox’s Chris Wallace did get WH Advisor Larry Kudlow to admit that this is really a tax on imports

Agree…But Hannity and Ingles and several others at Fox have stated (or had guests they agreed with that stated) the tariffs would be paid for by Mexico.

Remember Ross Perot and his “giant sucking sound” warning as jobs moved south? I do. It was a Trojan horse by stupid or worse politicians but no one listened. Of course then as some say the future is STEM and then of the engineers and mathematicians may need to move.

Acura is not on the list though so guess I’m ok but I don’t think I’d really know if an extra $2000 was tacked on or not any more than I know now what line items make up the final price.

I took a lot of flack for having a Ross Perot for president in my front yard @bing. But looking back it’s unlikely that if Perot had been elected he could have accomplished much. The decks on both sides of the political aisle are stacked in favor of the same deep pockets.

More Americans know who was the first choice in the NBA draft and who stars on GOT than who their congressman is and many of those who vote will decide whose name to check when they read the ballot at the polls based on some hot button issue and a catchy jingle heard that morning on the radio. Oh well, It’s a wonderful life if for Mr Potter and Jim Cramer.

The lesson of H. Ross Perot is that a vote for a third party candidate in a two-party system is a vote for the other side.

H. Ross Perot being in the 1992 race split the conservative vote just enough to make Bill Clinton president without having to win a majority. The same goes for Ralph Nader helping Bush become president in 2000 and Jill Stein helping Trump in 2016, although neither Nader nor Stein got as many votes as Perot.

Interestingly, the benefit of a global economy is one of the few issues neoliberals, conservatives, and car makers can agree upon. Every once in a while some demagogue exploits the issue to appease the radicals on both sides.

What the demagogues won’t tell you is that closing our borders to trade and making things inside the US would raise costs, and drive away customers who buy our goods, eroding our standard of living by contributing to inflation. Cars would certainly be a lot more expensive than they are.

That’s why I believe in a global economy. Certainly there is a downside, with some jobs exported. I think they would have gone away whether we were part of it or not, though. The advantage of participating is that we can have a good relationship with the countries that build some of the things we used to. By leading the world economy, we have the world currency. Why do you think the Chinese keep buying US Treasury securities? It seems to me that the problem isn’t so much that the old jobs went away, but that they weren’t replaced by good jobs where those that need them live.

It seems to me that the problem isn’t so much that the old jobs went away, but that they weren’t replaced by good jobs where those that need them live.

Amen to that. After all, would the world be a better place if we still employed elevator operators, ice haulers, and pinsetters? Nostalgia is a hell of a thing.

I feel bad for court reporters who are being put out of business by technology, but in their place, we’re hiring more transcribers who can work from home without the environmental impact of commuting.

What is the meaning of “global economy”? We have had a global economy for as long as we’ve had commerce. Remember the Silk Road? Remember the East India Company? It was the largest global trading company that ever existed and had its own army and navy. There is no developed nation on earth that can furnish all its needs and as such must trade globally for those items it doesn’t have or make. Tough to make electric car batteries without Cobalt. Not much Cobalt in the US.

Therein lies the ability to gain advantage over another country that wants some product we have or wants to sell us stuff they make. Bi-lateral trade is exactly that lever, for good or bad.

We have never had free trade. Some trade might be free from import tariffs TO the US but not FROM the US. A US built Buick sent to China gets hit with a 25% tariff, while a Chinese built Buick is only taxed 2.5% Not free, nor fair. US rice wasn’t allowed to be imported to China, at all until a year ago. Heck, Pres. Obama slapped a 35% tariff on Chinese tires in 2009.

Hard goods imported from cheap labor countries always raises the labor cost in those cheap countries. Mexican labor, while still less per hour than the US, is far higher than it was 30 years ago. Same for Chinese labor. Japanese used be a major source of electronics manufacturing but no longer is because their cost of labor grew too high. Neither country has to deal with the strict environmental regs. US manufacturers do, and it shows!