Hi all,
A couple months ago I had to remove my driver’s side rear steering knuckle in order to remove a frozen bearing hub assembly. While doing that job, I managed to strip the bolt/nut securing what I think is the toe arm ball joint onto the knuckle (it, too, was frozen solid). I managed to get the locking nut on the end of the bolt, but a good pot hole could detach it, and I’d be in trouble. When I went to the Subaru dealer, they noticed this and wanted $400 to repair it, but I think this will be a fairly simple job, and am hoping to do it myself.
I want to buy the part online, but I don’t know what it’s technically called. At the dealer, they called it the Lateral Link, but I think that might be a mistake. Could it be the Toe Arm?I’ve included a picture. If anyone knows what this thing is called, or could even link me to a site where I could buy one, that would be helpful. Also, if I’m wrong about it being an easy job, let me know.
Thanks!
Danny! 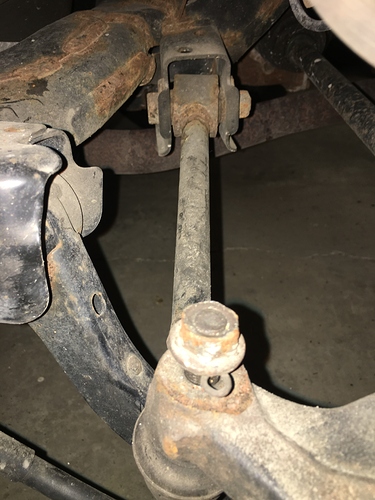 By the way, ignore the fact that the locking in is in under the nut. That’s as far as the nut would go down, and I stuck the pin in there for safe keeping in case I was able to get the darn thing to go on all the way, later. No such luck.

I’m also ignoring the fact that you didn’t tell us what year this Subaru is.

So, there’s no way to tell you.

Sorry, 2014. The drop down menus weren’t working. Some glitch with the forum.

I believe I found the answer to my question. It should be called the Lateral Arm (Part # 20250FG021). Lateral Arm

Rockauto calls it a control arm.

Thanks, Tester. Is this something I should definitely buy OEM? This Mevotech part looks legitimate Mevotech part

Every lateral link/control arm I’ve installed over the years were aftermarket. Not OEM.