Stripped thread on injector need to be pulled out

I’m trying to remove an injector that has a stripped thread, due to an incorrect removal method. The strip was measured to 1mm, the withdraw tool can screw in all the way but it slips off when pressure is applied, see this video I made: 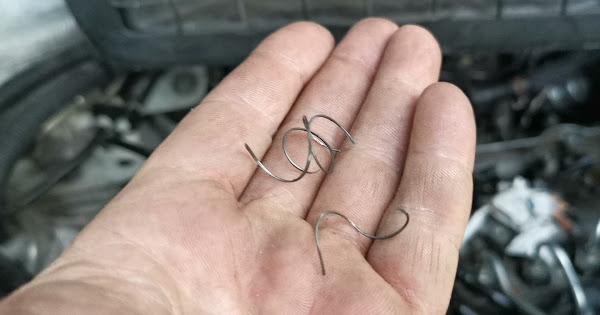 I’m stuck in this project at the moment and have considered welding the adaptor but since I don’t have my TIG here with me it’s not considered, so I tried:

But this morning I was thinking that I do need the thread to be complete as when the injector was tested and cleaned up, the nozzle must fit nice. So I was thinking thread repair now in order to keep this injector securely working an a sustainable manner, when the engine is at work.

Original thread is 13mm OD and this one is down to 12mm OD according to my vernier caliper.

Any good advice is welcome, thanks.

13mm? Unlikely. Metric bolts are even numbers so the bolt is not 13mm. For an injector screw that seem very large…but you didn’t say what engine or car, or type of fuel system you are working on.

Have you not heard of a Heli-coil? You drill out the old threads, use a special tap, and re-thread. The Heli-coil insert screws in and reforms the original thread.

Now if this a fluid nut, you can’t do that.

It’s actually not a construction bolt thread at all you’re correct, more likely some kind of plumbing thread, it’s smaller than 3/8" but bigger than a 1/4" if we talk BSP. The injector under Bosch brand is that very one

I could not find the specs for that thread in there, therefore, I am still unable to know what dye I would need to tap it smaller and neither the reducing bush that would be required to assemble afterwards. It sounds like I’m going to have to drill it out, but in order to do that, I will need to tap the inside of the injector to pull it off, or, best cas scenario, drill the side crosswise to have an axle going past the adapter end of my withdraw tool and the top thread of the injector.

I have found a new one to order at about $100USD but still have that one in the way as we speak.

And yes it’s the fluid male thread that I’m working with, I have seen the heli-coil thing but it didn’t seem that it would do the job.

Edit: Just gathered that the thread might be M14 x 1.5 can I get feedback on that?

So you still haven’t told me the engine. I assume it is a common rail direct injection diesel. Your Bosch link just sends me to the seach page and does not show the product.

The pressure this tube nut need to retain is something like 2000 bar. I recommend you REPLACE every damaged part. If that means the entire tube assembly and the injector, then so be it.

Since this site is primarily US members and we haven’t had a Renault sold here in 40 years, I cannot guess if that fitting is a 14x1.5 or not.

Yeah no dramas, thanks mate

That’s gonna a tough job for diy’er, but a good auto-machine shop would likely be able to handle this for you. Might be pretty reasonable fee. Suggest to ask there, before taking this job on yourself. Glues/epoxies, suggest to forget that idea. If you must try glue anyway, JB Weld original is the only one that might have a chance. Go to machine shop.