Air/Fuel Sensor threads stripped - Is this a safe way to do a HeliCoil repair?

Unfortunately the check engine light came on shortly after buying it, and the error code was the P1135 bank 1 / sensor 1 error code.

I had my fingers crossed that it would be a 5-min repair to replace the air / fuel sensor in the exhaust manifold, but even with following the Hayes manual, the threads stripped out of the bung on the manifold. So it has now turned into a nightmare repair.

As I understand it I have 4 options:

I tried a thread chaser but no luck.

So I’m going to try drilling out the bung and using this HeliCoil repair kit to fix it: 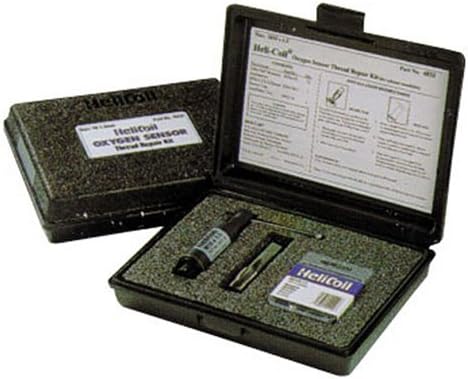 This kit is used for repairing tapped holes which have been stripped or damaged due to wear, corrosion and over-torque. Packaged in a blow molded case.

Here’s my question: Do you think I can use an electric hand drill to drill out the bung while the manifold is still attached to the engine? My concern is that the hole might not be perfectly straight (perpendicular) relative to the seating surface on the bung, which could lead to poor sealing between the sensor and the bung surface. But maybe I shouldn’t be concerned about this? After all, the original hole is basically a perfectly aligned pilot hole, and I should be able to get reasonably close to perpendicular (see attached photo or check it out here: http://www.guyfinley.org/testing/tim/img/rethreading-bung.jpg)

So do you think an in-place repair is possible? Or is this a situation where the manifold needs to be put in a jig at a machine shop?

I was going to remove the manifold, but there’s a mounting bold on the lower manifold bracket that is blocked by the engine mount. It would be quite an ordeal to take enough of the surrounding structure apart to get at that bolt.

What do you think?

I have used Helicoils with great success

That said, you might want to prevent the metal shavings from falling into the exhaust

I suppose you could put grease on the tap and back if out often to remove the debris.

There is one possibility that comes to mind: do your thing, and then use an extremely tiny vacuum cleaner hose attachment which will fit INTO the hole to suck out the debris.

I recently repaired some oxygen sensor threads. In my case it was necessary to put the y-pipe in the vice (no access when installed on vehicle). There was a lot of debris, and I’m glad it didn’t remain in the exhaust system.

Just giving you my thoughts on the matter.

I’d do it. The drill will guide you as it will want to take the path of least resistance, unless you add a lot of force against it. as for the shavings, you can try to get as many as possible out, but then I would use the vacuum cleaner exhaust or a leaf blower to blow the remaining filings as far down the exhaust as possible so they can’t be sucked back into the engine when you start it back up.

I think I agree with you assessment. I’m going to order the kit and give it a shot.

RE: the metal debris, I already have the lower pipe disconnected from the manifold, so I should be able to draw out most of the shavings that way. Though I’m not sure if it’s a straight shot through the manifold/cat-convertor or if the air (and therefore the shavings) would have to take a circuitous route to get all the way through.

I’ll watch to see if any shavings fall through. If they don’t, I’ll try going in through the sensor hole with the small vacuum hose as db4690 suggested.

Please let us know the outcome of your repair

You could use a right angle drill and not remove anything.