I bought one of these and it saved me a lot of time and frustration:
http://www.quickoildrainvalve.com/

It never leaked oil. I removed it when I sold the car and there was no more oil in the pan being “held back” by it.

Then I’ll disclaim: I don’t work for the company nor receive compensation for my opinion.

Well, my apologies then. Spammers come through on a fairly regular basis, post their “great experiences” with a product along with a link & are probably earning by the click.

If anyone is looking for a quick drain for their oil pan, there are lots of them out there & you can pick them up at most any auto parts store.

With all due respect guys, I think you gave the wrong advise. Buying a new drain plug and wrench that fits it is the intuitive answer. I think the real recommendation should be for him to go to Jiffy Lube because this guy has no business underneath his car. Better yet, maybe he should just park the car and take the bus. I taught my 9-year old son how to change the oil on both our cars this week and when he heard this guy’s question, even he knew how hairbrained it was. There are times I hear some people and ask “Do I want this guy driving next to me at 70 mph?”

And your “solution,” Brent, is to send him to Jiffy Lube?! That often leads to even worse problems. At least this guy seems to remember to refill the oil - though you are correct that is sounds like he should leave it to someone else. Just not a quickie-lube!

(And only now do I realize that this post originated in a show segment.)

New plugs and a wrench is the way to go. Especially these days, with many cars having one-time use drain plugs. They are not meant to be re-used.

I’ve never seen or heard of a one-time use drain plug. With proper protocol a drain plug and its hole should be good for the life of the vehicle.

This one works just fine for me. I have these on all the machines I maintain, including both motorcycles and the manual transmission on my car. 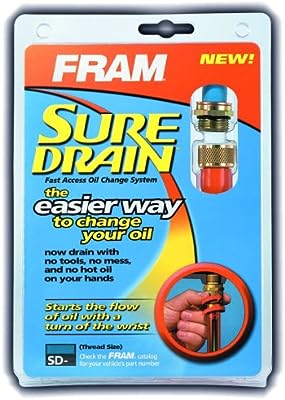 Fram Suredrain Fast Access Oil Change System is specially engineered and constructed from premium quality parts and is designed to provide confident, leak free operation over the life of your vehicle. ...

I also have no financial interest in this item.

The biggest advantage of using one of these is that the piece you screw on to open the valve has a hose attached, eliminating oil burns and greatly reducing spilled oil. I also don’t have to buy any crush washers anymore. In fact, on one bike and one minivan, I don’t even have to jack them up anymore to change the oil.

I’ve thought of maybe using these things before & I’m actually getting tempted now. I guess I’ve just always hesitated since, if the spigot is that easy to open …

I’ve never heard of a one time use drain plug either. I wonder whether RayG will clarify.

Been a while- but I finally came back and remembered this thread. To clarify that original post. Several years ago, I had a Honda CRV that was taken in for a service call. Oil change, etc… two days later I found a large oil spill under the car. I had it brought back to the dealer and was pretty P.O’d about it. They took a look and came back offering an apology. I was told that “the technician used the old filler plug, instead of using a new piece”. I was unfamiliar with that and I asked why? “Well, the new gasket/plug will assume the shape it needs when it is installed to create the best seal. When it is re-used, the seal may not be optimal since the plug may not go in exactly the same. It is our policy to use a fresh plug/gasket for each oil change.” So it may not be ‘designed’ for a one time use, but the explanation to use a fresh plug each time made sense. It isn’t like they were charging $$$ for a new one- it was absorbed in the cost of the oil change, I guess. thankfully I noticed the Exxon Valdez Spill under the car and didn’t go off on a trip with no oil at all.

I think it’s more likely that your oil pan was damaged, and rather than admit the tech doing the change messed up (or exacerbated an existing problem) and any possible problems that might go along with that, they just ate the cost of an oil pan.

Like the others, of all the vehicles I’ve worked on, I’ve never once heard of this phenomenon. I have heard of pans getting destroyed by careless tech’s, though. Normally, they’re not at a dealer, but that’s not to say there aren’t crappy techs wherever you may go.

Honda lists the oil plug gasket as non reusable, but the plug itself is reusable.

Yea…they’ve listed it that way for over 30 years…and when we owned our Honda’s…I NEVER EVER replaced it…and NEVER EVER had even one ounce leak out.

RayG, I think you, or the guy at the Honda dealership, meant to refer to the crush washer, not the plug itself.

When you buy an oil filter at a Honda dealership, it will come with a soft aluminum crush washer for the drain plug. When crush washers were made of copper, you could reuse them a few times, but you can’t reuse one of those aluminum ones without it leaking.

" I think the real recommendation should be for him to go to Jiffy Lube" While I have to agree that if the driver lacks the skill and knowledge to change oil safely, they should not change their own oil. However any of the fast lube shops would be the second worse possible advice.

With respect Ray, this shop guy (I’d guess he was a “service consultant”) was feeding you a total line of bull scat. He probably made it up right there on the spot.

If the plug didn’t go in “exactly the same way”, that means someone screwed up and crossthreaded the plug/pan. They weakened the threads. My guess is that they forgot to tighten the drain plug and the “service rep” made up this song & dance to cover their butts.

As regards the gasket, the brass gaskets that come with most vehicles can last…and seal… indefinitely. Years ago I used to use nylon gaskets, and they’re designed for single use…although I used them a number of times over. I did keep a package of them handy and change it when it looked too squished up.

No shop that I’ve ever hear of replaces the drain plugs as a matter of routine. If one needs to, than the guy changing the oil needs more training. Damage to threads comes usually from either overtorquing or from not taking the few seconds to let the threads catch and forcing the plug in.

I had the oil changed regularly on my Ford Aerostar at the Ford dealer in my community. The last time I had it done at the dealership, the service manager came out and told me that we had a problem. The person who had changed the oil before had overtightened the drain plug and the technician doing the oil change couldn’t get it out. I produced the service record that showed that the dealer did the last oil change. I then said, “You have a problem”. I suggested that I be given a car to drive so I could get home and when they had the problem solved, they could give me a call". The next day they had figured out how to remove the drain plug. I returned their car and went on to work.

Whitey- I believe your’re on the right track with that one. I may have misheard about what exactly he was referring to. But the phrase “crush washer” rings a bell.

It is interesting that out of all the nuts and bolts in a car, it is probable that the oil drain plug is removed and installed more than any other. Think about it: at 100,000 miles, with 5,000-mile oil change intervals, you or several other people have removed and installed the plug approximately 20 times. If you have bought into the 3,000-mile interval, 33+ times. Can you think of any fastener that gets more use? Not even a lug nut/bolt.

At least two manufacturers (I used to work on their manuals) say “Always replace” the drain plug. As of a certain model year or engine, perhaps with the introduction of aluminum oil pans, the drain plug seal could no longer be removed from the drain plug (the seal has a smaller inside diameter than the outside diameter of the threads on the plug, therefore the seal is ‘built in’ to the plug). I think this is a complete waste and one simple cause of the rising cost of vehicle maintenance.

I believe in a) replacing whichever seal is used on the drain plug (and, for example, on a VW/Audi plug, just cut the old seal off and replace it with a 14mm copper seal, or “crush washer”), b) inspecting the drain plug if the threads are getting tight, c) using a torque wrench to tighten the drain plug to spec, and d) fixing any problem that shows up right away.

During inspection, check for cross-threading, elongated threads, etc. Look for symmetry in the ridges and valleys of the threads. You can find a nut with the same threads and try screwing it into that. If it doesn’t go, you probably have a bad drain plug.

On the other hand, if a new drain plug does not thread into the oil pan, there are a couple of things you can do. If you have a thread chaser or a tap, use one of those. If you don’t, you can take a spare correctly-sized bolt and use a file or Dremel-type tool to cut grooves into it and create your own chaser. Run it through the new nut to test it. If it is OK, use that to clean the threads in the pan.

When you attempt to clean the pan’s threads, add white grease to the thread chaser or tap so that the cut metal will stick to it and come out with the tool. After you remove it, add a couple of quarts of kerosene, engine flush, or very thin oil to rinse out any metal slivers/contaminants. Rinse it a couple of times before installing your new drain plug and seal then add your oil. But remember, if the chasing process removes a lot of metal, chances are it is time for a new pan.

Why use a few words when hundreds will do? Good luck.